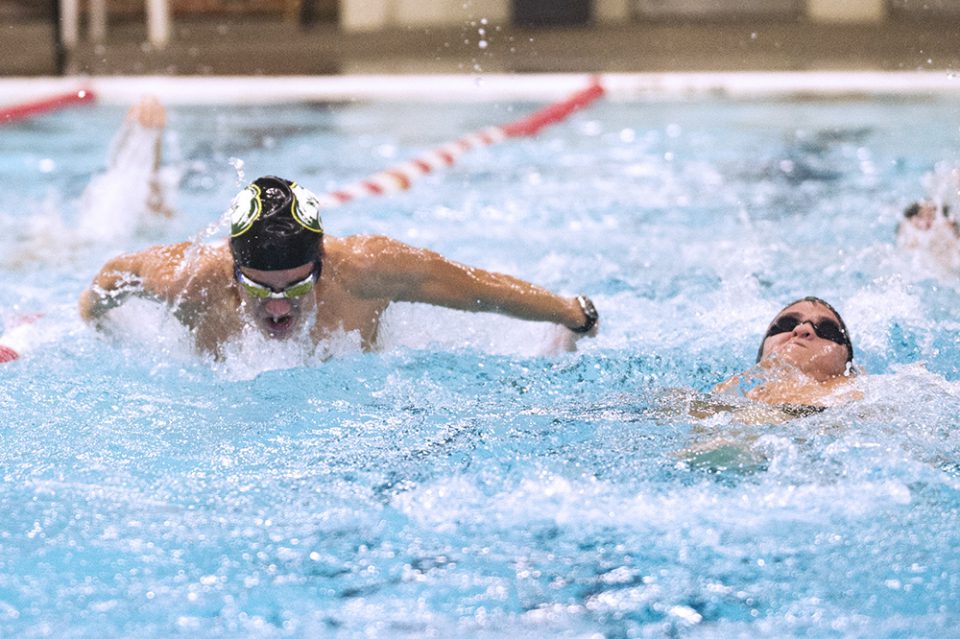 Freshman swimmer Nick Clervi propels through the water during practice Sept. 18. Photo by Maya Bell.
The KC Classic tomorrow and Saturday, Sept. 28 and 29, will be the boys’ swim and dive team’s first competition to have preliminary and final competitions on separate days this season. The KC Classic will be an important meet, acting as preparation for future two-day competitions such as the COMO Invitational Oct. 6 and state Nov. 8 and 9.

While the team lost several high scoring seniors last year, Head Coach Taylor Birsa said the Bruins’ spirit is still high. Older team members have stepped up to work with younger swimmers, doing “big bear little bear” activities to break down the specifics of swimming and competition such as turns, stroke mechanics, starts and general strategy. She said her program and players create a familial atmosphere through their positivity, hard work and dedication, qualities that will carry through practices and into competition.

“The boys have been putting in work in the pool and challenging themselves and pushing each other to get the most out of the workout,” Birsa said. “We started the season with simple sets and a lot of team bonding activities such as water polo or ultimate frisbee. It allowed the boys to get to know each other and it has been fantastic to see a lot of returning boys who were shy last year along with the new boys to really come out of their shells and have fun.”

Practices, however, are not all fun and games. Athletes will not start tapering, a process of reducing the amount of work they do at practice in order to retain more energy during competition, until meets such as the COMO Invitational. Junior Jack Koller said team members have devoted workouts and practices to reducing their competition times so they can score more points during their upcoming meets.

“Every Monday and Friday we go and lift in the weight room at Hickman, so [that has] prepared us a lot, [and] gotten us a lot stronger,” Koller said. “And then we’ve also been doing some sprints at practice and a lot of racing to help us prepare.”

After the loss of three influential senior athletes who graduated this past season, younger members must rise up to fill these empty spaces for the team to have a chance at qualifying for state.

This year’s swimmers must work on their speed and endurance in order to hold their own against their larger competition this season, Birsa said. She wants to create a fun atmosphere during practice while still having the swimmers think about their stroke and race strategy during every part of the set. To prepare her athletes for individual and team events and teach them how to swim fast even when they are tired, Birsa said she has increased the intensity of weight room workouts and in pool practice over the past few weeks.

“[The KC Classic is a] very similar set up to the state meet, which is a great experience for the boys,” Birsa said. “They are able to see how their body handles all of that racing over two days.”

The team has already competed in four smaller meets this season, but the KC Classic will be its first competition against larger, faster teams. Each swimmer has his own areas of strength and weakness, and it is Birsa’s job to recognize and improve them to ensure individual and team success.

“Coach Taylor is trying to get me to push faster in the second half of all of my races and it’s starting to shave some time off of my PR [personal record], which is really helpful,” Koller said. “But as a team, she’ll just give some good little pieces of advice that really helps all of us.”

Although the KC Classic allows the athletes to experience what a two-day competition is like, Birsa said the team’s main focus right now is on the COMO Invitational and then state. At the meet Sept. 28 and 29, Birsa hopes many of her athletes will get “second swims” at the finals on Saturday. She wants her athletes to “put it all out there and see what happens” even when they are tired, but at the same time to enjoy the experience and have fun.

“I’m expecting a lot of success from us since we’ve put a lot of work in and so far we’ve seen some hope that we’ll do real well,” Koller said. “And I just hope that all the hard work we put in will pay off.”

Soccer looks to improve against MHS