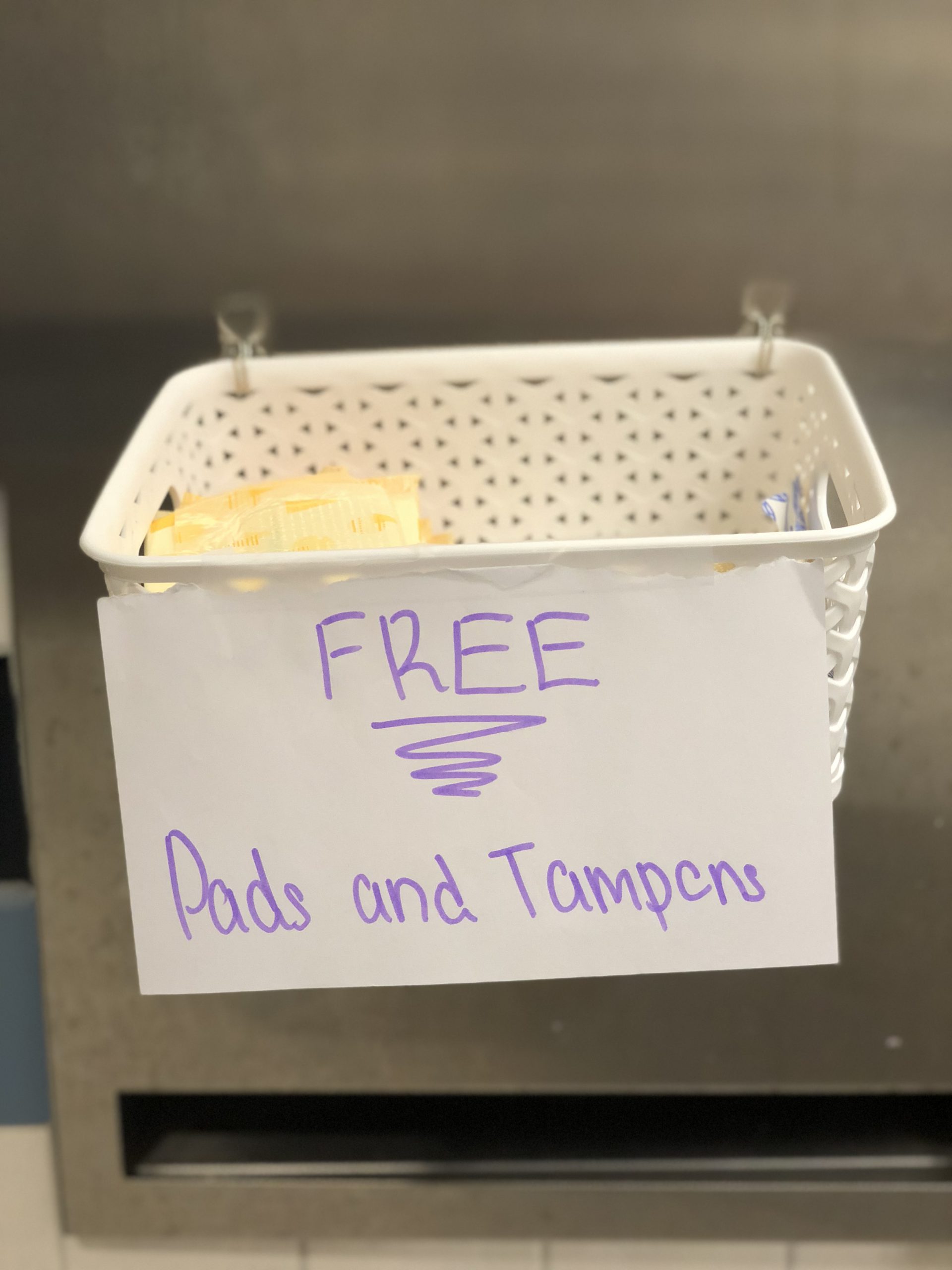 It started with a civics project and a sneaky period. Freshman Shruti Gautam was going about her day when her menstrual cycle caught her unprepared and she had to borrow a pad from a friend. She found this process inconvenient and embarrassing, prompting her to investigate what the school does do provide its students with necessary hygiene products. Consequently, Gautam decided to tackle the period problem in her effort to make a difference in her community, the objective of her civics project.

The problem jolted Gautam into action. Her first step in remedying it was to administer a survey. 94.3 percent of the 87 responses believe there was a problem with the lack of menstruation products in RBHS. Gautam spoke with Custodial Supervisor Cheryl Sims and found out half of the dispensers of feminine hygiene products in the bathrooms were broken. While students can get feminine products in the nurse’s office, using calculations based on the average length of a menstrual cycle, the number of girls at RBHS, and the assumption that 75 percent of girls come prepared for all their periods, she estimated that the nurse should be giving out about 4,275 menstrual products per year. In actuality, the nurse distributes 383 products, just nine percent of Gautam’s estimate.

“My period, like many teenage girls’, is super irregular so I find myself forgetting supplies a lot,” junior Katy Miller said. “I think if the school takes on the responsibility of carrying simple health supplies like band aids and ibuprofen, they should take on the responsibility of carrying supplies for an unavoidable natural occurrence. I have to do an embarrassing hunt to ask people if I can borrow something, and it’s kind of awful because… you find yourself letting a lot of people in on your personal information.”

Gautam created a petition to request to remove current dispensers to and replace them with free feminine hygiene products. She argued these products are as necessary as toilet paper and that the school should, therefore, provide them free of cost without an uncomfortable walk to the nurse’s office. The petition received 162 signatures in three days from female and male students alike.

She brought this information to Principal Dr. Jennifer Rukstad. This was far beyond what was expected for the freshman civics students’ projects. Gautam herself mentioned that her civics teacher Ms. Mary Dix told her that it is rare for students to follow through on their projects once the in-class portion is over.

“It’s actually quite difficult to make changes to our building, equipment and facilities because there is a set protocol and a series of steps that must be followed; many people at different levels of the process have to give their approval,” Dix said.

Throughout May of her freshman year, Gautam contacted a University of Missouri Sorority President, the Women and Children’s Hospital, Hy-vee and Gerbes, in hopes of finding someone who would sponsor the project, but to no avail.

Gautam finally spoke with Superintendent Dr. Peter Stiepleman. She sent him an email including survey data, quotes and a funding plan. Dr. Stiepleman took the problem to the school board, who agreed to run a pilot program and eventually install dispensers.

Five months after she started the project, with the help of Carla London, the chief equity officer for the district, and her secretary Shari Kraus, Gautam received the supplies she needed, from menstrual products, to hooks and baskets to put in the bathrooms. Gautam made cost estimates for the two-week pilot, the monthly upkeep and the yearly upkeep (excluding holidays), as well as the cost of installing eight new dispensers for each of the school bathrooms: these were $68.04, $44.72, $536.64 and $2032, respectively.

After the first day of the pilot program, Gautam said the cost will probably exceed her initial estimates, but she hopes that the school board will continue to provide funds.

Kraus brought the material to RBHS on the afternoon of Sept. 13 and with the help of her friends Lola, Kanchan Hans and Meaghan Cone, Gautam put the baskets of menstrual products up in all the girls’ bathrooms in the school. She takes inventory every morning and afternoon.

The now sophomore Gautam is surprised and incredibly happy with the fruits of her labor. It was a long process, but she said it was worth it to fix such a basic problem.

“It’s absolutely so stupid that there are dispensers, but they are broken,” Gautam said. “Ms. London even said that the entire board agreed that if this was a problem that happened to males, then we would have had free product dispensers [for] around 30 years. I just [didn’t] want to give up on something that everyone agrees on, but no one wants to do the work [for].”

Within one day of the pilot program starting, students used 121 hygiene products. Girls such as Miller are  grateful for this change.

“Having free supplies in the bathroom is incredibly convenient, and it makes you feel important knowing that someone has your back enough to supply something that basic,”  Miller said.

What do you think of the new hygiene products?

Amanda is a staff writer for Southside Media. She is part of Young Democrats, French Honor Society, Giving Girls Opportunities, Tri M, Mu Alpha Theta and the city of Columbia's Youth Advisory Council. In her free time she enjoys singing and reading.