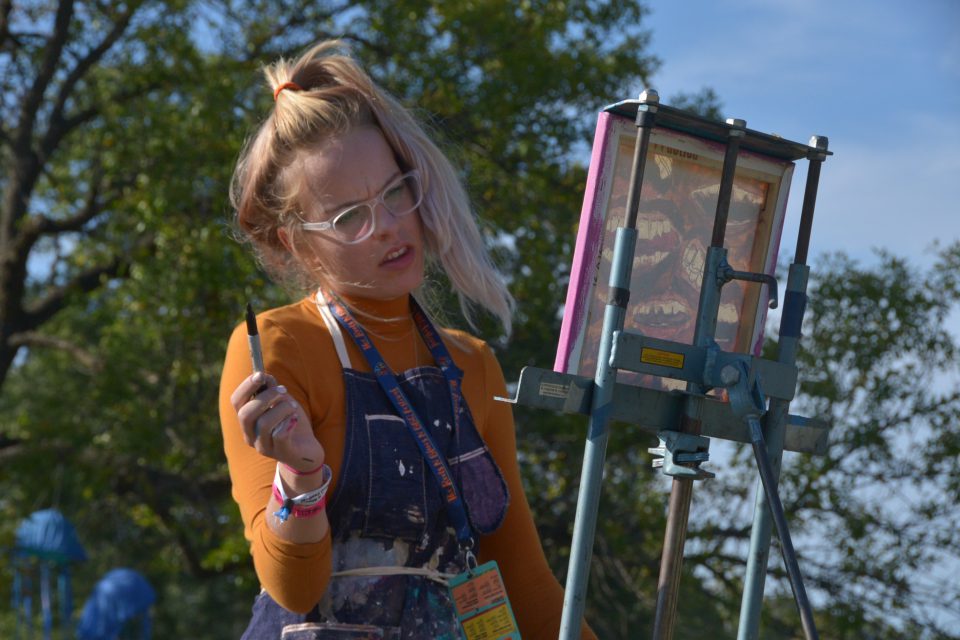 Saturday afternoon, Mikki Philippe and Walter Seymour enjoyed the atmosphere of the Roots n Blues n Barbecue festival at Stephens Lake Park. Philippe painted and talked with Seymour while bands such as Ha Ha Tonka performed on the nearby stage.

Tired of reading? Listen to the full Q&A here.

Where are you from?

Why did you choose to pursue art?

Philippe: “I don’t know how to answer that. I just… It’s the only thing I’m good at. I was a journalism major at Mizzou, so I know what you’re doing and everything, and I realized I’m not really good at that. I’m not good at math, but I like painting and it makes people happy, so that’s why I do it.”

Philippe: “It was easy. I was a double major already. I transferred from Kansas City Art Institute to Mizzou after my freshman year. And I did journalism in high school. I wanted to do illustration and stuff, but I realized, like, I don’t want to be in school for so long with a bunch of competitive people doing it when I could just be going straight into art and having fun with it and being happy.”

What are you working on right now?

Philippe: “I really like mouths, so I have this one [the piece on the easel] I’m doing. And then I did this one, [the piece at my feet], a while back. But I like teeth a lot because if you, like, people talk with their mouths and everybody has a different mouth shape. You can tell a person by the way their mouth is, which I know sounds wild. But, um, I don’t know, I just really like teeth. I like looking at my own teeth, and I take care of my teeth, so I like painting them, too. I like doing hands, also. It’s the same thing. Like, you can tell a lot about a person through their hands. And it’s just easy to trace your hand out.”

What drew you to Roots n Blues?

Philippe: “So, my good friend from church runs Roots n Blues, so he, like, slipped me in last year on the art crew. And I’m really good friends now with the women who are on the art crew, we hang out, they’re really great people. They’re like my moms away from home, which is so sweet. But I brought up the idea to them, I’m like, ‘Hey, during the festival can I just paint and hang out?’ because I haven’t had time to paint this semester on my own. And they’re like, ‘Yeah, that’s fine. Just go hide your stuff in the VIP area.’ So, this morning my boyfriend, [Walter Seymour] and I came out and set it all up, and I’m not looking to sell anything, I just want to paint stuff.”

What is your favorite part of Roots n Blues?

Seymour: “The music’s great. Watching her paint is great. I love barbecue so, I mean, it’s all around just a great time for me.”

Where are you from?

Seymour: “I’m actually from Iowa. I live in Ames, and I go to Iowa State University.”

Why are you in Columbia?

Seymour: “I’m just visiting her, so, visiting her for the weeknd. This is my first time in Columbia.”

What do you think of the Roots n Blues festival so far?

Seymour: “It’s awesome. We went to the Avett Brothers last night, and they were, they’re incredible. And then all day we’ve been here chilling at this stage, been painting, so it’s been pretty great.”

Are you a Columbia native or just stopping by for the festival? Let us know in the comments below.

The festival’s most fashionable