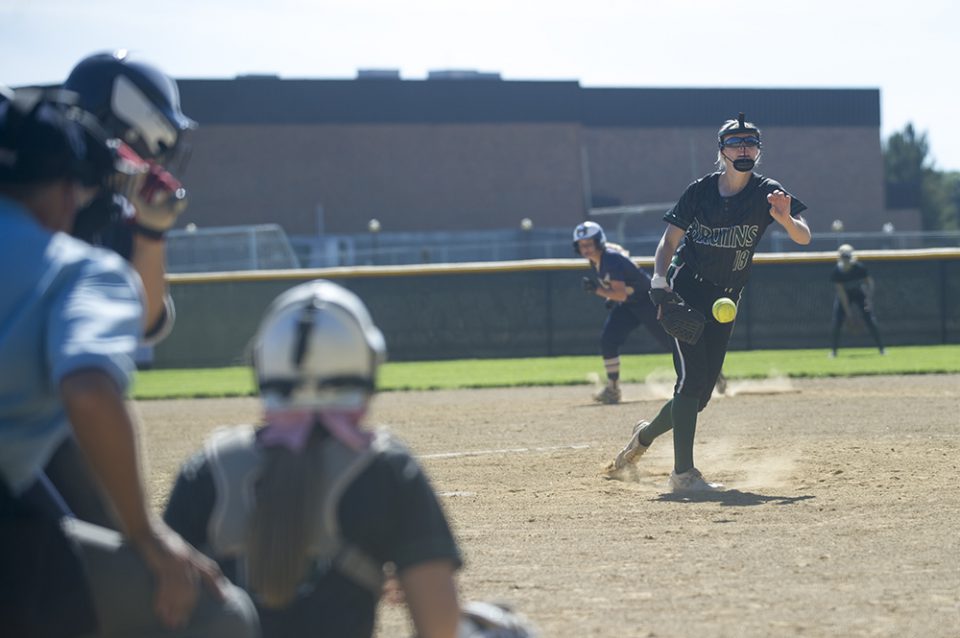 Sophomore pitcher and outfielder Ella Schouten pitches to Holt High School Sept. 22. The Bruins lost the home game (0-5). They will play again in the Hickman Tournament this weekend. Photo by Sophie Eaton.

Tomorrow and Saturday, the softball team will play in the Hickman Tournament. Starting its season with a [13-7] record, the athletes will continue to strive toward success.

Junior infielder and catcher Chloe Simon said the team will keep working hard on its skills as usual to prepare for the tournament.

“Teams compete and as they win and lose they go in the winners’ and losers’ bracket, each winner moving on competing against a different winner until only the top two are left for the championship game,” Simon said. “The winner of that is the winner of the whole tournament.”

The team’s attention will soon be focused on the tournament and its first opponent, Bowling Green, head coach Janel Twehous said.

“We will look at their record, see if we have any similar opponents, see if we can get any info on the team and prepare from that,” Twehous said.

Junior outfielder Maddie Marrero is confident for the game because, besides the freshmen, it will not be the team’s first time at this particular competition.

“I think this tournament brings out a more competitive drive in us because most of the teams are ones close to home, like Hickman obviously,” Marrero said. “We want to win not only for ourselves but to show the teams we play that we are willing to put in the effort to win.”

When Twehous looks at her athletes she said she sees the team’s bond as a major strength, which can be used to its advantage during games.

“Defensively, they are sound when they are communicating. Offensively, they have powerful bats but are working to become stronger in the short game,” Twehous said. “When we face a stronger pitcher, it is important to challenge ourselves and the pitcher; put the ball in play and utilize our speed.”

With the team’s strong communication, Marrero said the amount of games and good competition has helped the Bruins in their ability to work well as a unit rather than just individually.

“I hope and I think this year will bring out the best in all of us at this tournament,” Marrero said. “I know that everyone has their own personal weaknesses, and our coach always says if we didn’t have stuff to work on it wouldn’t be fun.”

Will you be cheering on the team? Let us know in the comments below.