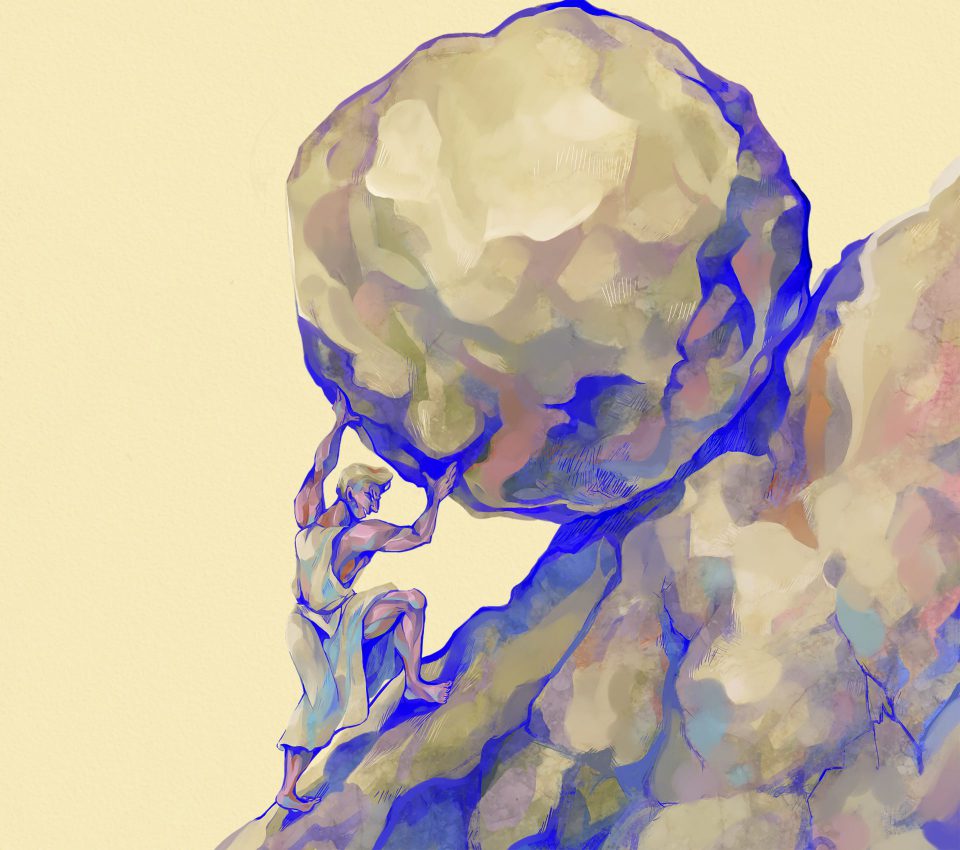 Greek mythology paints romantic love as a vital and appealing emotion, while, at the same time, presenting stories where romance causes hurtful, deadly and destructive endings. The doomed lovers, Hero and Leander, fell tragic to this plot.

The two fall in love while on opposite sides of the Hellespont strait. One night, while swimming across the strait to meet Hero, Leander drowns. Upon hearing of her lover’s death, Hero drowns herself in order to be with him. Though the tales of undying love are beautiful and heart-wrenching, romance was not the only type of love the Greeks idealized.

Around 390 BC, the ancient Greeks developed the idea that love has more than one form. In fact, they divided love into eight types: eros, philia, storge, ludus, mania, pragma, philautia and agape. Only four of these allude to feelings between romantic partners, while the other four describe forms of love present in other areas of life.

Philia, for example, exists between friends. The ancient Greeks valued philia over the more romantic types of love because they believed it was a love shared with equals, such as loyalty among friends and camaraderie in teammates.

While spending countless hours together in car rides and through show choir, juniors Greta McNamee and Keegan Adkins have developed philia. The two invite each other almost everywhere, from Adkins’ grandparents’ house to watch movies and eat dinner, to a trip to Chicago where they spent a few days with McNamee’s family. They also have a tradition of sleepovers at each other’s houses before every show choir competition. With all the time they’ve shared, the two have formed a bond that Adkins says rivals his strong relationship with his sister.

“We’ve got tons of mutual friends, especially through the [school] musical [Once Upon A Mattress] two years ago along with musical theatre and show choir last year. We spend so much time together both voluntarily and involuntarily,” McNamee said. “We [joke] around [with] each other most of the time and are really comfortable with bringing up honest issues we might have. At this point, we really know a lot about each other so it’s just keeping the other updated, telling jokes, sharing memes, generally really fun and positive.”

The two’s friendship has grown over the years, gaining more trust and love for each other with each passing day. For McNamee, the philia she shares with Adkins and her other intimate friends improves her life. The ability to be herself around many people gives her strength and reassurance.

“I see a loving friendship as one with pure comfort with each other, where you are genuinely happy to see them or be with them but you can also spend days apart without worry,” McNamee said. “I think that trust in the other person is probably the most important thing, and I definitely have that with my friends, especially the closest ones.”

In Adkins’ perspective, one of friendship’s most significant components is communication. He said talking out conflicts is imperative and that if two people want to get closer, they need to talk to one another. Additionally, he believes one of the best ways to show love is simply by expressing it verbally.
“I definitely have very strong and [loving] relationships with my friends,” Adkins said. “I just tell them [that I love them] all the time. . . It doesn’t have to be all the time but whenever you feel like you love them just tell them. It really helps them know that you’re still good friends and it’s also very good for their mental health so that they don’t feel worthless.”

“I see a loving friendship as one with pure comfort with each other, where you are genuinely happy to see them or be with them but you can also spend days apart without worry.” – Greta McNamee, junior
The two see how philia plays a vital role in the everyday quality of life. Adkins believes his friends significantly boost his mental wellness and McNamee confides in her friends with concerns she doesn’t discuss with her family.

Though she may not be as open with her family, McNamee still experiences storge love, or love occurring between a parent and child. The Greeks considered storge a more difficult type of love to maintain than philia; storge is an innate and almost forced love starting a child’s birth, while philia allows for friends to choose if they want to form a tight bond.
Though McNamee believes strong relationships in families are crucial, they are not as powerful for her as friendships.

“I’d say [love between friends is] different from love between family because there’s more of a one-sided care system in a family where your parents take care of you, but in a friendship you both take care of each other,” McNamee said. “In my experience, friend love is stronger probably because I see them more than my family and I can be more open and exposed with them. . . and openness has a lot to do with the strength of the love.”

Conversely, RBHS receptionist Michele Parker sees storge as an indestructible type of love. The bond Parker has with her family, consisting of her husband, son, daughter-in-law and three biological daughters, she said, is unconditional and so much stronger than the love she shares with friends. She wishes, though, children would tell parents about their issues and keep their parents in touch with their lives so they could receive all the love and support their parents can give.

“I definitely feel love for my friends. To me love means putting someone else’s needs and wants before my own. I truly try to put others and their needs before my own in both my family and in friendships. [But] one of the differences in the love for my family is the depth of the love,” Parker said. “A strong love with family is important because that is what holds us together. So many things happen in life, both good and bad, and love will pull us through the tough times and it makes the good times so much sweeter.”

Instead of one being more significant or stronger than the other, Gerard James Ritzka, a sociology professor at St. Louis Community College, explains both philia and storge love are crucial for a person to have in terms of proper social development, or socialization. He says one experiences love from families and friends before, during and after romantic love occurs, and, therefore, such love plays a larger role in the social life of a person.

Ritzka then said how one person’s perception of love differs from another’s based on what his or her past encounters with love looked like. For those who haven’t experienced philia or storge, or for those who were involved in an unhealthy love, he said it could become tough for them to find a healthy love as they don’t know what a healthy type of love looks like.

While Adkins and McNamee define love as more ambiguous and subjective ideas, such as trust, satisfaction and, according to Adkins, “whatever one wants it to be,” Parker looks to her faith and in the Bible to give meaning to love. She highlights 1 Corinthians 13, and its message about the qualities of love.

“Love is truly a selfless act… It is wanting the best for someone, even when that means a sacrifice on your part,” Parker said. “It may look different in the way it is demonstrated because each individual is different and what is meaningful differs with each person.”

What is the most meaningful relationship in your life? Let us know in the comments below.

Senior Katie Whaley is an editor in chief and writer for The Rock and Bearing News. Whaley volunteers with RBRO in the Food Bank and Project Linus units and spreads her creative ideas in the Art club. She spends her free time listening to music, and offering emotional support to her friends.