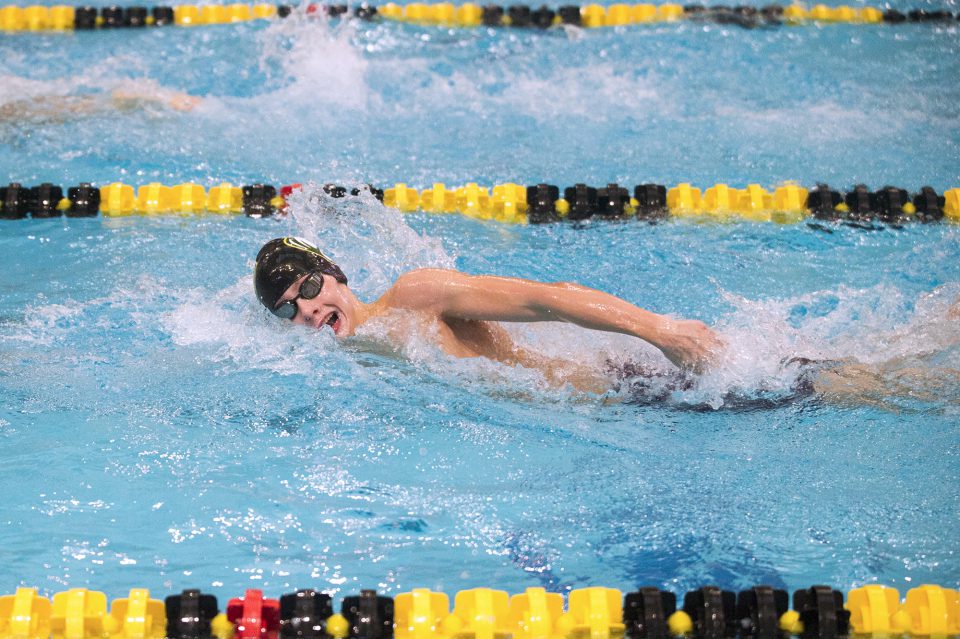 Hosted by Hickman High School, the swimming and diving meet held Oct. 27 served as the last chance for competitors to achieve state cuts, senior Braden Hopkins said. The meet was open to all three Columbia Public School high schools, but was not officially scored, as the main purpose was to obtain qualifying times.

In the state of Missouri, officials do not consider performances after Oct. 31 for state qualification.

Sophomore Turner DeArmond, who swam in the 100 freestyle, 200 freestyle relay, 100 breaststroke and 400 freestyle relay, said the “last chance” aspect certainly put additional pressure on athletes; however, the senior appreciation and food at the end of the meet made for a relaxed, loose and light mood.

On one hand, the atmosphere was pretty relaxed and lighthearted, because for the people who already had the cuts, this meet was very laid back and low pressure,” DeArmond said. “But I also felt a sort of tense undercurrent, at least from the people who were still trying to make state. I think the people who didn’t make state were definitely feeling the pressure, because everyone wants to go to state and try and fight for and with their team to win.

Competing in multiple events during a single meet is not uncommon. Like DeArmond, Hopkins, raced in the 200 medley relay, the 200 freestyle relay, the 200 individual medley and the 100 breastroke.

“I did all right,” Hopkins said. “I expected to do a little bit better, but I had been working hard all week.”

Though everyone raced this weekend, there were differences with the practice schedule, Hopkins said. The swimmers guaranteed a state spot had practice from 6 to 8 a.m. every day, while those who didn’t have state times had easier sets to rest for the weekend’s competition.

“A typical practice starts with 1,000 yards loosen, then we do some 25s underwater. During the under-waters we work on our breakouts and dolphin kicks,” Hopkins said. “Other than that the practices vary, for example on Thursday we did a couple [Individual Medley] IM sets that worked on transitions from each stroke, other than that the main set is just there to make us work hard and become better.”

As for drills and workouts, senior Hunter Rogers believes underwaters, swimming pool distance underwater and IM distances were the most important because they focused on cardio. In order to swim fast, an athlete must be able to kick fast and get a good start off the blocks, Rogers said.

“Underwaters help because they increase your chances of staring out in the lead after [the] swimmer dives in,” Rogers said. “You also have to hold your breath, which helps with your lung capacity. If you breathe less in a race, then you take less time breathing, decreasing your finishing time. IMs are great because they encompass every single stroke [fly, back, breast and free]. The distance IMs are also good because they are very tiring, and help with your in water cardio as well.”

Rogers, who competed in the 100 free and 50 free, said for some swimmers, their times had been close all season, which meant this was their only chance of making it to state.

“This ideology changed our mindset because it forced everybody to think that it was all or nothing,” Rogers said. “For some of us it was our last ever meet too, if we didn’t make state, so we really wanted to go fast.”

As the state series approaches, the Bruins know what it takes to earn a podium finish. In the 2017-2018 school year, the boys’ team won the state championship title with 243 points. Ultimately, DeArmond said the individuals that will succeed in the post-season are the ones that have been willing to work hard and grind it out. Early morning practices, DeArmond said, has been an important factor, as it brings out the best or worst in each swimmer’s work ethic.

“Either you defy all the little things nagging at you, or you give in to the fact that you’re tired, or the fact that it’s way too early to be this active, and you give up and don’t try,” DeArmond said. “Swimming is an interesting sport in that the coach is there to coach you and help you, but whether you succeed in the sport and work hard at practice is ultimately up to you. The people that have gotten those state cuts and who will be successful at state are the ones who have risen to the challenge Coach Taylor [Birsa] puts there for us.”

The athletes who have achieved state cuts will compete in the State Swim Preliminaries Nov. 8 at the St. Peters Rec-Plex in St. Peters, Missouri.

Are you a member of the swimming and diving team? Let us know in the comments below.

Students learn about Indian culture through particpation in India Nite