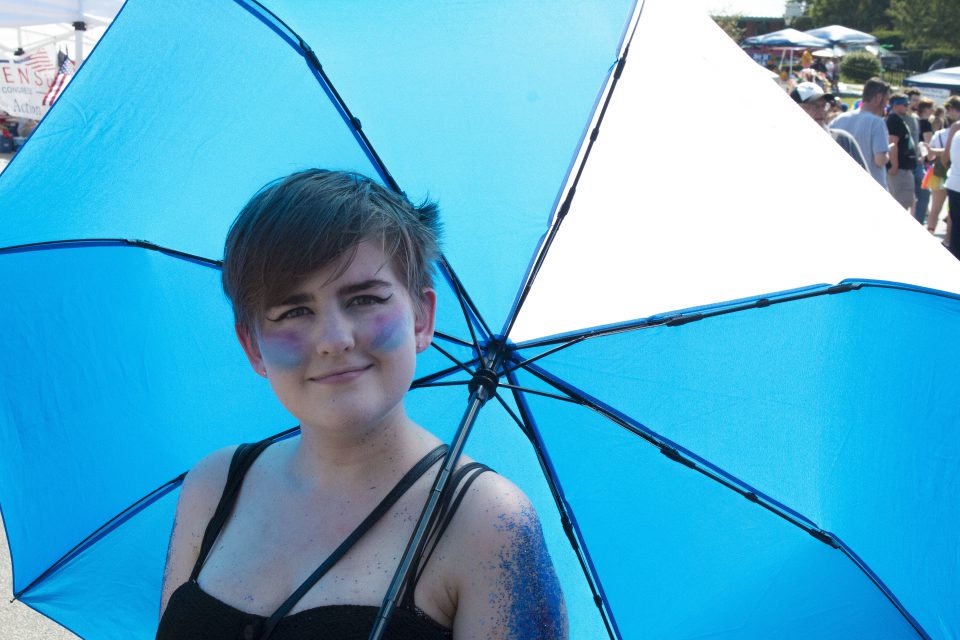 Senior Kerrie Heath celebrating MidMo Pride back on Aug. 25 of this year. Heath adorned herself with blue, purple, and dark pink face paint. These colors come from the bisexual pride flag, which is used to represent the bi community. Photo by George Frey / Bearing News

In middle school senior Kerrie Heath began to realize she was bisexual after having a crush on a girl. Since then she has been openly bisexual and has been in a same-sex relationship.

“I had this sudden crush on a girl that I was friends with,” Heath said. “I immediately went to a different friend about my feelings. After talking about it, I realized I felt the same attraction to women as I do men. That girl ended up being my first girlfriend.”

Heath said identifying as bisexual has had its ups and downs. Bisexuality comes with many societal stereotypes, such as people, even in the LGBTQ community, denying the existence, or saying that bisexual people are attention seeking or confused. According to Psychology Today writer Loren A. Olsen said sexual orientation is much more complicated than gay or straight and that often times people see men who have sex with men (MSM) or women who have sex with women (WSW) as being just gay. Bisexuality, according to Olsen, is seen by some LGBTQ community members as being ‘illegitamte.’

“A lot of people don’t really think about bisexuality, especially when it comes to things like representation in shows, and movies,” Heath said. “I can only think of about three or so characters off the top of my head that are bisexual in canon.”

Labels or societal taboos can often dictate how (such as the thought that bisexuals are attention seeking) one presents themselves, especially if they are not heterosexual. The media can perpetuate labels, and the representation of bisexuality in TV and other entertainment has been quite slim in comparison to their homosexual and heterosexual counterparts. In “Modern Family,” for example, there is a gay couple, which are well-known characters of the show. In comparison, most people struggle to find a character which is notably bisexual.

“I don’t want bisexuality to become some sort of mandatory quota either,” Heath said. “I want representation to come naturally.”

With more representation comes a larger awareness, yet there are still many who deny the idea that someone can be attracted to both sexes. Heath, however, is confident in herself, and to her, that’s the key in addressing those who won’t take her sexual orientation seriously.

“It’s a little upsetting to think that some people feel that way [that bisexuality doesn’t exist],” Heath said. “But anyone who tries to tell me how to feel doesn’t really matter to me at all. I wouldn’t say it’s hard, but it’s not easy, either; it’s just me.”

Boys’ soccer gearing up for districts

Football dominates first round of districts

George Frey was a photographer and writer for The Rock and Bearing News. He graduated Rock Bridge in 2019, and is looking to study International Studies, specializing in East Asia, as well as journalism at the University of Missouri - Columbia.

It’s great that the LGBTQ+ community is being covered in our newspaper!