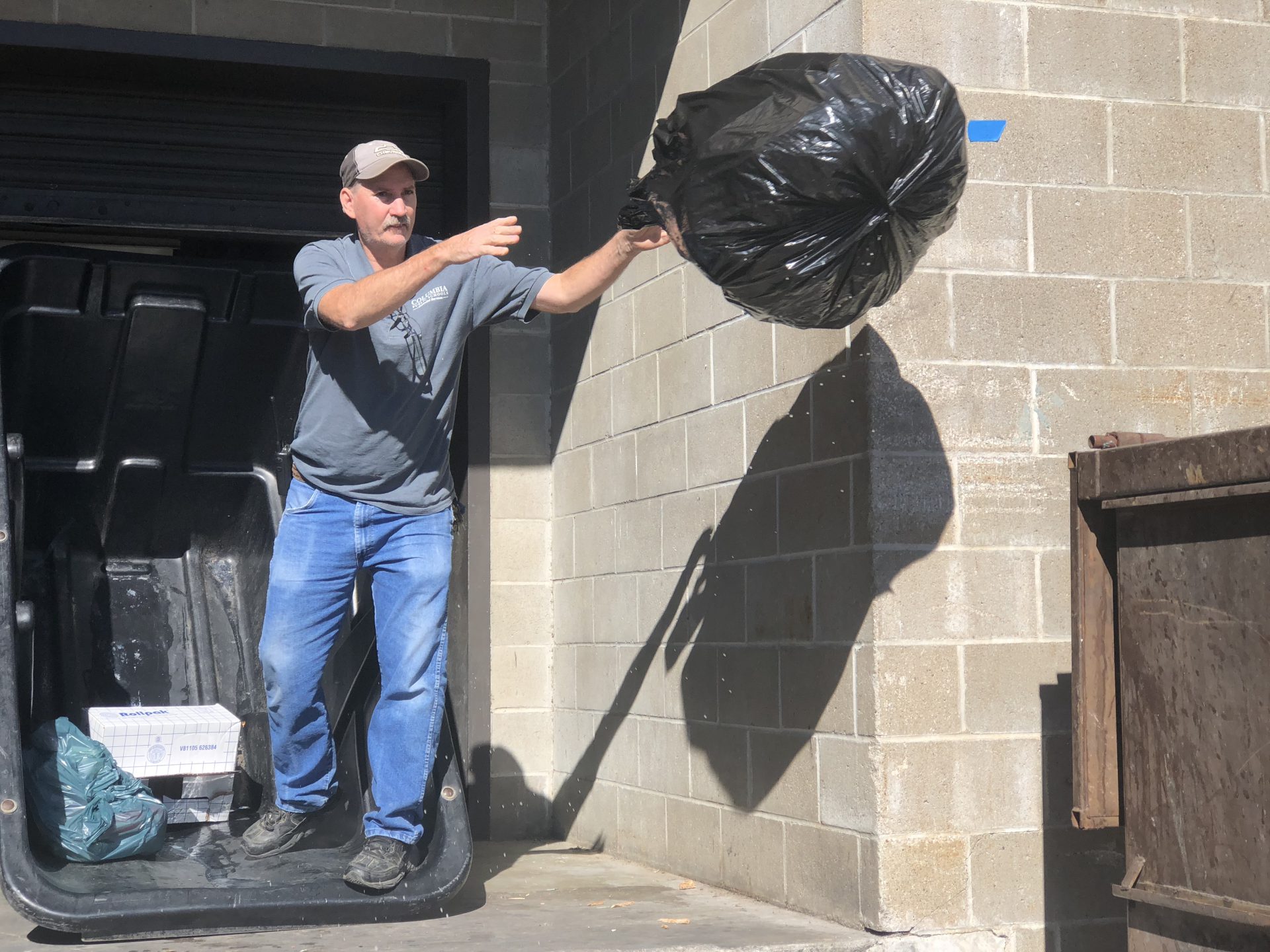 DUMPED: A custodian of 36 years, Greg Reinkemeyer works to support his children in college. He collects bins twice per day, one after each lunch period. The amount of food waste students produce is appalling, he said. He feels they should be more grateful to their parents who pay for the meal. Photo by Allie Pigg

The International Panel on Climate Change (I.P.C.C.) published a special report updating the physical realities of global rising temperatures Oct. 10, which is at an increase of one degree Celsius since preindustrial times.

The assessment said the consequences of another temperature bloom over a 0.5 degrees growth would be devastating for world sustainability and also detailed possible ways humans could stagnate such occurrences.

The 25-page report covered nearly all aspects of the proven impacts of global warming, from rising sea levels to extreme weather, and outlined the potential solutions of climate change, from curbing greenhouse emission to cutting organic waste.

The report said, “decreasing food loss, waste and behavioral change around diets could lead to effective mitigation and adaptation options by reducing both emissions and pressure on land with significant co-benefits for food security, human health and sustainable development.”

Change, the report argues, should begin with the individual because between 2007 and 2014 Americans disposed of, on average, one pound of food per day which made the United States the leader in per capita organic waste, according to “Plos One,” a review scientific journal.

“For people who have plenty, [they think], ‘who cares if you throw away something when you’ve always got enough?’ It is a thing of privilege to even have food waste.”

The negligent lifestyle, RBHS janitor Greg Reinkemeyer said, proliferates when students enter school.
Reinkemeyer empties and collects trash daily after both A and B lunch, and as he wraps up the gorged black bags he notices the leftovers: whole slices of pizzas, apples with two browning bites, untouched mashed potatoes with gravy slathered on and much more like it.

Along with the trash bags, Reinkemeyer must gather the food that didn’t make it there: trays left out on benches, chicken tenders dropped on the floor and curdles of food likely to have been monkeyed around.
While Reinkemeyer said many students clean their plates, the large amount of organic waste accrued and littered is a shame at RBHS.

“I’m pushing, like, around 100 to 115 bags [of trash] per day out of the school,” Reinkemeyer said. “In the average trash can, I see three or four trays with a [combined] whole meal wasted. An average meal is $3.50, [and] that meal can go to somebody else.”

Students such as sophomore Olena Sawelenko feel bad to dump food, but said sometimes it is her only choice.

“I don’t eat a ton at lunch, [so] I don’t eat all of it; I’ll just eat whatever I can,” Sawlenko said. “I’ve offered it to friends before but a lot of them don’t take it because they don’t eat school lunches, so I end up having to throw it away.”

Other students, like junior Ruth Bryan, said the scraps are because of the unappealing taste of the cafeteria menu.School policies, like the requirement of a fruit or vegetable to make a meal, also contribute to added waste, she said.

“I often only eat the fries that come with it because everything else is disgusting,” Bryan said. “It costs less when you get it with like vegetables, and I just throw it all away.” 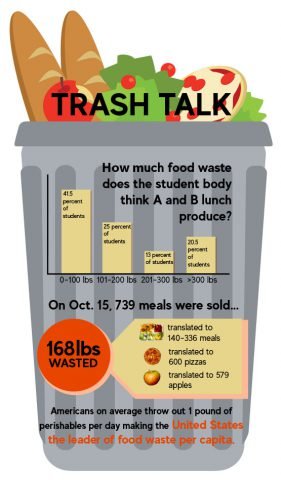 RBHS’ Southside Media measured the perishables at RBHS Oct. 15 by organizing the garbage into two categories: organic waste and other waste, which includes liquid waste.

Of the trash cleared for the two lunch periods, 168 pounds of compostable waste were accumulated.
The evaluation does not include the bins of trash in classrooms, which are collected after school, as well as trash holders aligned along the exterior of the school.

Biology teacher Melissa Wessel said this estimate could be higher as students don’t always empty their trays in the cafeteria and hallways.

“In my hallway, the kids who eat outside of our classroom doors, a lot of the times pop into the classrooms to throw some trash in there, so there is definitely more,” Wessel said.

Head of kitchen staff, Shannon Brown, shook her head after hearing the large figure of food waste at RBHS and said she feels disappointed to see uneaten, perfectly good snacks go to the dump.

“It just breaks my heart to see all those apples in wrappers [thrown away] because we could reuse them if they just put them in the share basket,” Brown said.

Wessel said while she thinks the cafeteria staff is doing a good job controlling the cooking leftovers with the implementation of compost alternatives for the unsold meals, the student body could use awareness over the subject.

“[As teenagers], the ability for that forward thinking, I mean you’re just not there yet. It’s a developmental thing, but also an American thing,” Wessel said. “For people who have plenty, [they think,] ‘who cares if you throw away something when you’ve always got enough?’ People who’ve experienced not having enough are probably not throwing that stuff away. It is a thing of privilege to even have food waste.”

To ameliorate the issue of excessive compostable waste, some school across the nation took initiative to improve their trash policies. Last year one high school in Kansas City, Turner High School, amassed 300,000 pounds of organic waste.

This year, students created a compost plan with a grant from Kauffman Foundation and the help of Missouri Organics.Now, the school is on track to cut 80 percent of their perishables by converting it to compost.

Wessel said RBHS should also apply compost policies, but additionally, students need to understand why they should care.

“[Educate yourself by] taking a biology course; know the science behind why putting the apple somewhere other than the trash can is a better choice. You have to have some knowledge and a reason to care about the future,” Wessel said. “Why do I care? Because I care about the world that I’m leaving for my children.”

It’s okay to be alone

I’m really glad someone covered this issue! I have seen a lot of food waste around our school and it makes me really sad and angry when people don’t consider how their actions are impacting the school and our environment. I definitely think this helped create some awareness!

Food waste is definitely a huge issue that I wish RB would pay more attention too. We’re lucky enough to have enough money to even have food waste, but we don’t realize what a problem it is after throwing away just one thing.

I’m a big fan of the idea of creating less waste. I’m left wondering when exactly “preindustrial times” are.