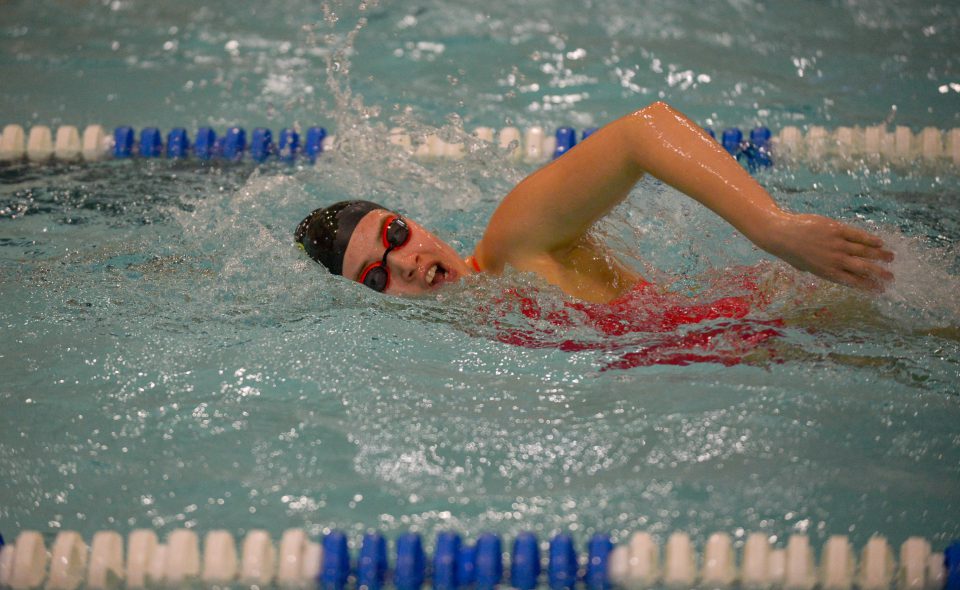 Senior Piper Osman swims at a practice Dec. 7. The Bruins compete in the Smith-Cotton/Marshall meet this weekend. Photo by Sophie Eaton.

The girls’ swimming and diving team has had a successful string of past seasons, to say the least.
In the 2017-18 season, as the Class 2 state champions, the team won its third state title in the past four years. Entering a new competition period, the athletes will travel to Smith-Cotton High School (SCHS) today for the second meet.

“The first meet was great to see the new girls get up and race,” head coach Taylor Birsa said. “It gave me an idea of what strokes are their strongest [and] weakest, along with strokes we need to fine tune, and that we need to bump up our yardage now.”

The meet is open to varsity competitors and will see competition from SCHS and Marshall High School.

“I let the girls pick their races each meet,” Birsa said. “A lot of girls choose to swim different events meet to meet to challenge themselves and also try and get more state cuts.”

Senior Kelli Jackson, who swam in the 200 Freestyle Relay and the 300 Butterfly Relay at the Marquette Relays, the first meet of the season, has been swimming for RBHS since her junior year. Her freshman and sophomore year, she dove for the team. Already, Jackson sees the pre-season work showing positive results.

“We lift twice a week which has made us all stronger,” Jackson said. “I’ve already seen improvement in my fly because my legs are getting stronger, and I can lift my arms out of the water easier.”
Reflecting on the first meet, Jackson said she hopes to improve endurance. Though she enjoys the butterfly, the event wore her out quickly, she said. While Jackson looks to focus on stamina, sophomore Emily Stephens has sights for working on acceleration.

“After [the Marquette Relays] I realized I really could work on sprinting and getting up to [the] fastest speed possible,” Stephens said. “Something I hope will stay the same for the next meet and meets to come is the positive and exciting environment my teammates place that make swim fun.”

As a team, Birsa said underwaters and turns are valuable drills to focus on. Underwaters are crucial in races since swimmers are faster underwater in a streamline than they are on top of the water.

“Nailing those and working that speed off the wall will help them in their races,” Birsa said, “especially when they are tired toward the end of their race.”

Though it is difficult to predict the outcome of a season from solely the first meet, the history of the team points to another successful season.

“The first meet is over so we know what our times were,” Birsa said. “Now we will work on improving and getting faster.”

Are you on the swimming and diving team? Let us know in the comments below.

Boys’ basketball to take on MCA

I am not on the swimming and diving team. Nevertheless it’s a good article.