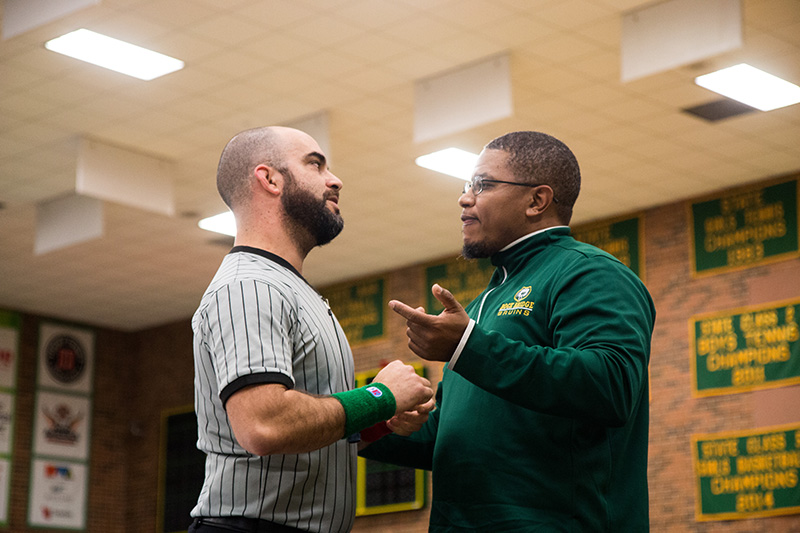 Passion is one of the strongest emotions felt by any human. An emotion that we often use to label athletes. While we tend to look at the players and analyze their commitment to the sport before anyone else, it’s time we look towards those who keep the sport running.

Coaching is not an easy job, neither is reffing for any sport. When training high school athletes, a coach chooses to deal with the drama of parents and embrace the previous coach’s policies. This photo illustrates passion by showing the tension between both RBHS head wrestling coach, Robin Watkins, and the referee calling that match. His expression shows his passion for the wrestling team. The raised eyebrows illustrates questioning and also displays Watkins’ passion for his team. In my experience as an athlete, a coach who is willing to step up against a referee is one who cares for the kids he or she coaches. His hand gestures convey this message as well, the same questioning only a coach can get away with.

The referee in the photo holds a different kind of passion for the event. Wrestling would not be able to continue without those who are willing to take the heat of furious parents, coaches and athletes. While they are not highly regarded by any of those who participate in any athletic event, referees make it possible. The common backstory I have come to acknowledge, that is shared between referees in all sports, is that they have a love for the game. They want a way to be able to continue to show their respect. By making the game possible for future athletes referees feel as though they are contributing to the sports community. The raised glance of the referee shows the tension between the two in the photo, as both are very well versed in the rules of the sport and have developed a passion for what they do. By observing this altercation we see how both of them have developed a love for the game.

The composition of the photo helps the viewer understand what was happening at this point in time. The raised hands and questioning glance on Watkins face shows a disbelief in the referee’s last call. Being able to see the whites of the referees eyes helps the viewer understand the expression he was making at the time and the tension that may be building. By taking this photo from the side, rather than from behind Watkins or the referee, the viewer can see just how close the two are to each other, further illustrating the heat of the moment. This also allows viewers to see the partial expression of each person’s’ face and gain further understanding of the moment.

To me, seeing a coach and a referee, both who obviously love the sport, locked in a debate over a call just shows how deeply someone can admire a sport. Both of the men understand the game so deeply that they can come to a heated disagreement over a simple call. This may not be the way many of us think about the portrayal of passion and its meanings, but it is clear that the two in this photograph have found something they are passionate about and regard it as something worth fighting for.

The first time I traveled outside the U.S.