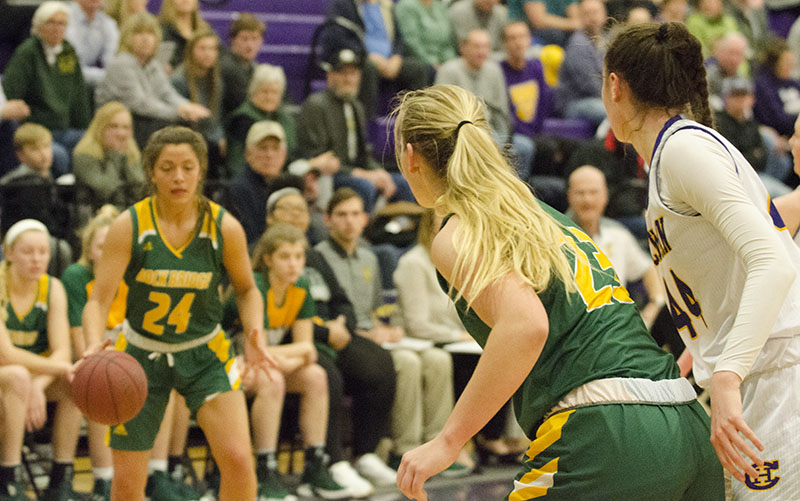 Up until halftime of the Bruins’ (46-33) loss against the Jefferson City High School (JCHS) Jays, the score was incredibly close. Being down one point (22-21) after two quarters of play versus an undefeated team was impressive, to say the least.

The third quarter is when the Jays started to break away from the Bruins. The Bruins scored only five points in these eight minutes while the Jays put up 17, bringing the Jays ahead with a score of (39-26).

Sophomore Ella Schouten feels the team’s lack of energy was the main reason for the difference in momentum between the Bruins and the Jays.

“We knew coming out of halftime that we needed to bring [energy] because we knew they would and we needed to match their energy,” Schouten said. “In the second quarter, we had the mentality of ‘dig in’ which has been our mentality all season. In the third quarter, we were a little more relaxed and didn’t play as physical which affected our energy. This led to them going on a run and us falling behind and not being able to come back.”

Sophomore Kate Linnemeyer believes the key to recovering from a hard-fought loss is the team’s ability to desire growth and change.

“After a tough loss, we all try to keep our heads up,” Linnemeyer said. “We try to use our mistakes as a learning experience.”

The Bruins’ next game is set for Wednesday, Feb. 13, weather permitting, against Miller Career Academy in St. Louis, Mo. With the future on the radar for the team, Schouten thinks the key to success is to move forward.

“We need to learn from this game, but we really need to flush it and move on,” Schouten said. “We need to continue digging in as we have all season and continue to come together as a team. I think the biggest thing for us on Wednesday is to have that ‘next play mentality’ and play for all four quarters without taking a quarter or play off.”