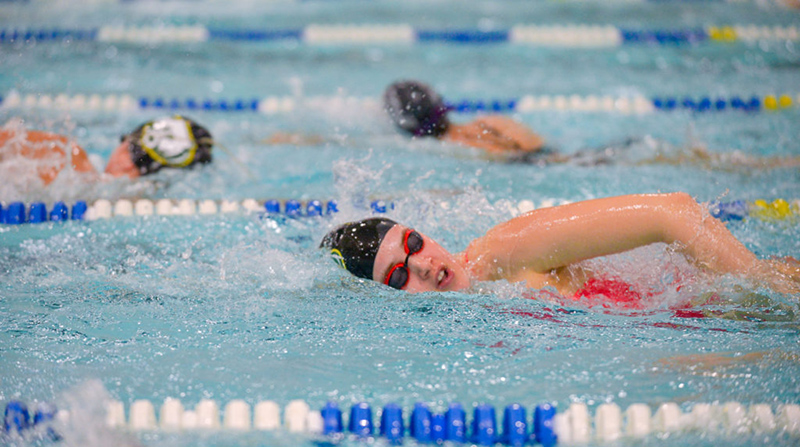 The girls’ swimming and diving team will compete at the City of St. Peters Rec-Plex in St. Peters, MO beginning tomorrow and continuing through Saturday.

Class 2 will compete Thursday and Friday morning, and Class 1 will compete Friday afternoon and Saturday. In the last four years, the Bruins won three of the four state championships and hope to continue their legacy of excellence this weekend.

For senior Piper Osman, winning state would mean a full cycle of success for her time in high school since the team’s state championship her freshman year. After severely spraining her right ankle following the CoMo Invitational, Osman said she is still not at 100 percent but hopes to pull through for her team this weekend. She will compete in the 100 meter butterfly, the 200 meter medley relay and the 200 meter freestyle relay.

“Freshmen year’s your first year, but junior, senior year you’ve been there, done that,” Osman said. “You’ve made your mistakes, and you’re ready to just do your best and lay it all out here and show everyone what you’ve got.”

Although the regular season ended for the girls who did not qualify for state, those who made either automatic or consideration cuts for state trained for the past two weeks in preparation. The team lost three Division 1 athletes at the end of last season’s because they graduated, junior Reagan Richards said, but added many new freshmen this year, which helped to solidify the team’s positive dynamic.

“We have great athletes who are versatile,” head coach Taylor Birsa said. “We are able to fill spots with girls who have stepped up in order to fill those holes. A lot of girls have realized they are the top dogs and need [or] want to step up to play that role.”

“I want them to be smart with competing, but to also have fun. You swim fast when you are having fun. If one race did not go like you did, the meet isn’t over. There are still more swims—relays or another individual—and the team needs you.”

During most of the season leading up to state the team focused on technique work, but in the weeks before state it concentrated on power work. Richards and Osman said they have done power work with cords, shoots and buckets, as well as focusing on relay starts and sprint sets to help them go faster in their races. Birsa has also had her team taper and work with fins to allow the girls to experience the speed she hopes they can achieve at state. Along with physical training, the team worked on mental visualization during practice to help with mental preparedness and toughness. As a “very mental person” Richards uses this time to help her focus on how she will perform in the 100 meter butterfly, the 100 meter breaststroke and the 200 medley relay.

“We usually do that at the start of practice. It’s just kind of like, ‘Okay. Visualize your meet warmup. Visualize your event. Visualize your entire day if you want to,’” Richards said. “It’s more of what you struggle with, visualize that part of it so you have it down for the meet so there’s not as many mistakes.”

Although the Bruins are not the largest team competing at state, Osman is determined they win. She said this year’s team is one of the smallest and least broad one’s in the school’s recent history, made up largely of sophomores. Even if the girls are unable to place first, she still hopes they can give the other team a run for their money and come

“It’s really fun to come out [onto the pool deck] fifth or sixth and show that we’re a small team . . . yet we are there to dominate,” Osman said. “And we put everything that we can into the pool, and we show up, and we beat the good teams.”

Unlike meets earlier in the season such as the Cape Girardeau Invitational and the Springfield Invitational, Richards said state is a “different atmosphere.” She is excited to have parents, fans and friends from school who have come out to support the team in the stands. She hopes the team starts off strong in their first event, the 200 meter medley relay, so they can set a positive tone for the rest of the meet.

“[State is] so intense, and when you’re about to start your event everyone in the whole entire arena is dead silent because you can not talk at the start,” Richards aid. “It’s just so intense, but it’s like hyping you up. It’s not anxious.”

Birsa said she wants the team to bring home a trophy, as well as for the girls to have some “personal hardware” at the end of the weekend. Going into the competition, she said a lot of the girls are set up to place in the top 16, top eight or to win their events. As a coach, Birsa said one of the most important things she can do to help her players succeed is to stay positive and happy and to keep a sense of humor.

Even with the loss of three talented athletes, Osman and Richards are confident in the team’s ability to dominate at state. Richards said with the girls’ natural talent, strenuous training and competitive nature they are set up for success. Still, she believes they will have to fight harder than last year to win and uphold the Bruin’s high-caliber reputation.

Wish the swim and dive team luck in the comments below!

A snapshot of Courtwarming ‘Snow Day’