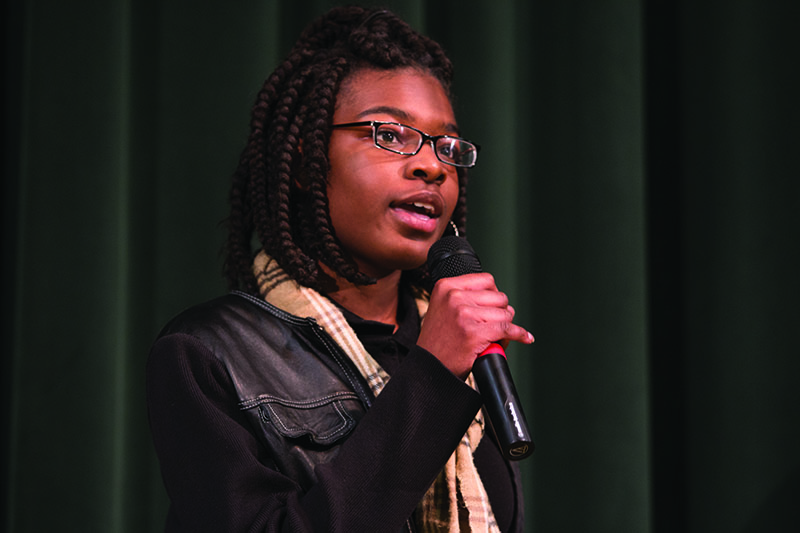 During the Feb. 14 courtwarming assembly, five students spoke in honor of Black History Month (BHM). To begin the tribute, assistant principal Deborah Greene sang the Negro National Anthem, “Lift Every Voice and Sing.” After Greene’s introduction, each speaker paid their respects to BHM through speech.

“To me, a spoken word is not complete until you own it,” Payne said. “Although I write my own poetry, I don’t feel as if I own it until I know it inside out, feel it, and I love it.”

In order to perform her poem, Payne volunteered during a Multicultural Achievement Committee (MAC) Scholars program meeting. Payne said there are no auditions because in MAC Scholars there is no “good enough” or “not good enough.” Her decision to participate in the BHM part of the assembly came from her belief that her voice is not without purpose.

“Black history is a part of American history,” Payne said. “It should be known just as well as any other American history, so every opportunity I get to educate and express on this topic, I take it personally and seriously, too.”

The first time I drove a car

Ann Fitzmaurice is an Editor-in-Chief for the RBHS journalism department. Along with journalism, she is in the front ensemble in the marching band and plays bassoon in wind symphony. She is also a Young Democrats co-president, GGO, Tri-M, Bruinthon, Girls who Code, National Honors Society member and cat lover.