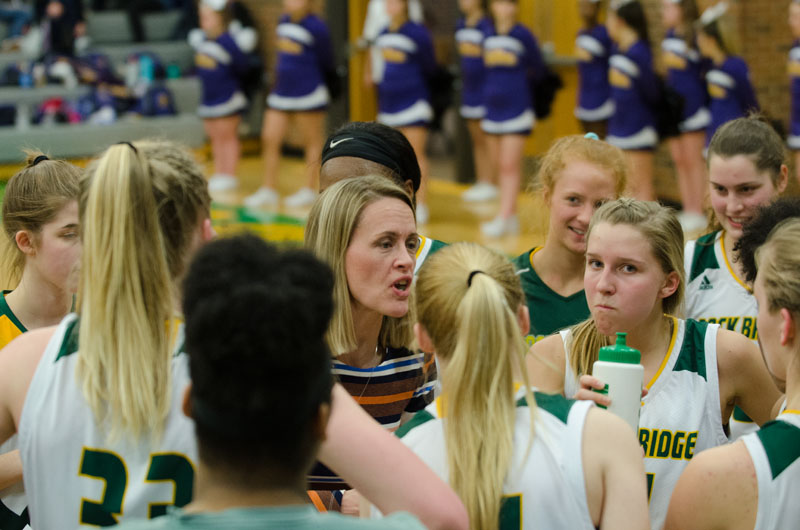 Sedalia seems to be a good court for both the girls’ and boys’ basketball teams. The Lady Bruins defeated Lebanon High School (LHS) (54-46) Wednesday, March 6 in Sedalia, Mo. This win brings the Bruins to [18-9] on the year and allows the team to advance the state quarterfinals.

Sophomore Ella Schouten is feeling both retrospective and analytical after her team’s win. She grasps the importance of every little detail in the making of a state championship.

“It definitely feels good as a team to get such a hard-fought win together with everyone contributing,” Schouten said. “I think going into quarterfinals we have to come out prepared from the start and play together, move the ball and get great shots. Ultimately, I think we just have to believe in each other as a team and have confidence in our game. We just need to stick to what we do best.”

As a senior, Mary Capron is taking things day by day. She understands that with any loss, comes the end of her high school basketball career.

“I’m really looking forward to getting to spend three more days with my teammates,” Capron said. “We’re at the point in the season where you never know how long you have left and I’m really glad I get to keep playing with some of my best friends.”

Capron has complete confidence in her teammates and their ability to execute. She is trusting their game plan and believes they are well prepared.

“The work for postseason began the first day of practice,” Capron said. “We’ve been working towards this all season and this is the point that we get to come out and just play basketball and have fun, that’s what makes all the work worth it.”

As the Bruins head into their next game, the team feels ready. Schouten attributes the team’s success to being able to focus and play its own style of basketball.

“To be honest, I don’t know much about the team we are playing on Saturday,” Schouten said. “But what I do know is that if we play our game and do what we do best, nobody in the state can beat us.”

“I feel that my team and I will be prepared for a dog fight on Saturday,” Schouten said. “At this point in the season, the little things like diving for loose balls, crashing the boards and boxing out will play a huge role in what the outcome of the game is.”

Are you going to make the trip to Bolivar to support the girls’ and boys’ basketball teams? Let us know in the comments below!

The first time I went to the Tetons