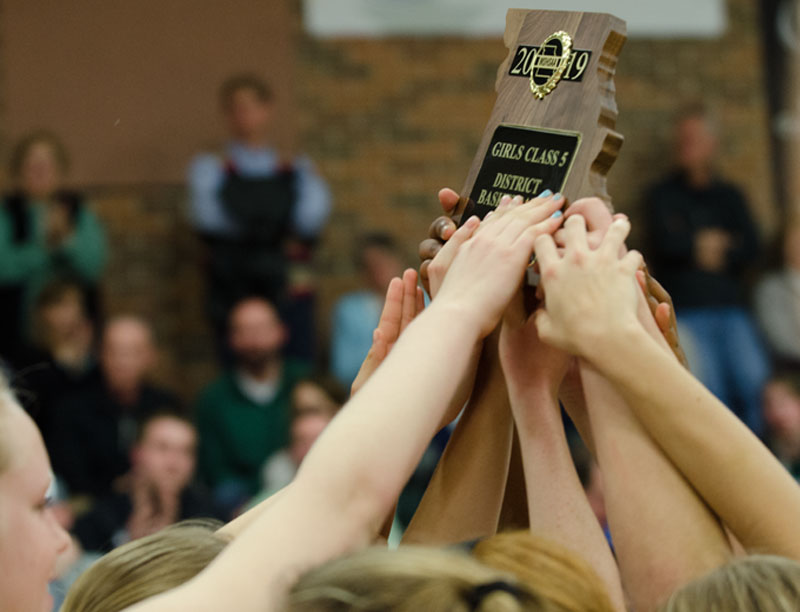 The Lady Bruins hold the district trophy up in a joyous celebration after defeating BHS (45-30).

An electricity, that carried through the entire game, lit up RBHS’ gym at the girls’ basketball district championship game against the Belton High School (BHS) Tigers. The game started slow for the Bruins as they attempted to brush off their nerves. Early on they allowed for back to back turnovers giving the Tigers a six point lead. Despite having a smaller student section than preferred, the Bruins started playing the game fiercely. The Tigers began pushing the ball down low in the post, in hopes of drawing fouls from both junior Eryn Puett and senior Maddie Collier. The new strategy gained the Tigers the lead once again. The Tigers would maintain this lead as the clock ticked down to end the first quarter.

The Bruins fired back in the second quarter to earn the lead. After a series of questionable calls in favor of both the Tigers and the Bruins, the crowds on both sides of the gym grew louder. Parent and student sections alike protested for their team.

With spring sports practices now in session, many student athletes were unable to make the beginning of the game. Afternoon practices began to finish as the middle of the second quarter approached. Evidently, the student section began to grow in size, giving the Bruins a boost in energy with increased support. The energy shift made a noticeable difference in the Bruins’ offensive approach. The Lady Bruins gained a series of possessions and were the only side to score.

RBHS maintained its lead going into half time. As the third quarter began, the BHS Tigers came on the court determined to get back the lead. Athletes flew across the court as the game intensified. Physical contact between the team’s athletes increased, however, head coach Jill Nagel was not concerned that this would affect the ability of her team.

“We try and practice very physical, because we are a very physical team ourselves,” said Nagel “They know it is an extreme game because each team is fighting for their season to continue. They [BHS] were down and they are going to do anything they can to get the ball back”

The fourth quarter brought the same struggles as the third quarter had for the Bruins. With two minutes remaining, the Tigers began fouling RBHS intentionally in order to slow the clock down. Only a mere five seconds later, the Tigers entered into one and one, indicating that the Tigers had stacked so many fouls that any further fouls would give the Bruins an opportunity to shoot free-throws. Each point the Bruins gained lit up the bench with players flying out of their seats in support of their teammates. Junior Biance Stocks was a firecracker on the sidelines, flying into the air at any play that benefited the Bruins.

“I rely on my teammates to keep me calm,” Stocks said “I know that as long as I keep doing everything that I can do to help my team as best as I can then everything is going to be fine”

The Bruins went on to win (45-30). The team ran onto the court as the fourth quarter finally came to an end. The gym lit up with cheers from all RBHS fans, the energy level not calming down until the girls had finally left the floor. The Bruins left as district champion and will play in regionals.[/vc_column_text][/vc_column][/vc_row]