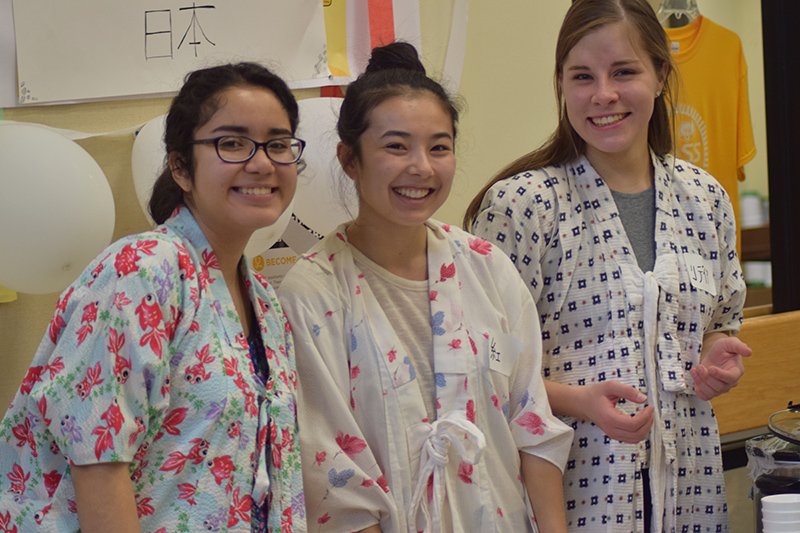 Dr. Julie Passanante Elman, Associate Professor of Women’s and Gender Studies at the University of Missouri—Columbia, said Women’s History Month is a “celebration of intersectionality,” a time for women of all races, sexualities and cultures to acknowledge the unique experiences of their fellow females.

Throughout much of history, a woman’s place has been in the home and the field, her opinion virtually worthless. During the Han period in Chinese history, Confucian vocabulary defined a woman’s societal and familial role as one of self-sacrifice, loyalty, chastity and faithfulness, according to asiasociety.org, a center for global education.

Beginning in the 1820s, the cult of domesticity, took root in middle and upper class American society and emphasized the values of piety, purity, domesticity and submissiveness for women. Women were the caretakers, cleaners and cooks. Men were the providers and had the final say in decisions. Although women’s rights and independences have expanded in the modern era through increased access to education, junior Tien Truong said traditional gender roles persist in her native country of Vietnam.

“Shifting immigration patterns show us that gender roles are diverse. Rather than being a result of ‘natural’ or biological differences between men and women, gender roles are established through ever-shifting sets of cultural norms,” Dr. Elman said. “Norms have changed over time and within and across different cultures, so gender roles are always evolving.”

In Da Nang, where Truong lived, women typically became teachers, doctors or worked as junk food vendors while men went into law and engineering professions. She said parents would rather have their children go into a legal or engineering profession instead of becoming a teacher when they grow up. Under the rule of dictatorial monarchs in Vietnam, women were powerless in the family, could not attend school or go to work. Truong said they were only able to do chores and household tasks at home. With globalization, however, the French came to Vietnam to imperialize and brought with them ideas of feminism and female empowerment.

“[Huyen Thanh Quan] was a Vietnamese woman, and then she stood up for women’s rights, I think in the 19th century,” Truong said. “Until then, we had the rights because we were still under the king and queen, so we just let the king decide all of the things until France came. I think that’s when women actually stood up and wanted to protect their rights.”

Junior Sadia Moumita said the expectation of women as homemakers also exists in Bangladeshi culture. Her parents immigrated from Bangladesh to the United States in the 1990s and raised their children Muslim. In Bangladesh, she sees a society where the general public interweaves religious practices with gender-specific guidelines to hold males and females accountable for their actions by different standards.

“I think there’s still a lot of that [mentality that] men have a lot more leeway than women do. And I guess you could say in America that’s the same case, but I think with Bangladesh there’s a lot of a different atmosphere because you do also have religion directly associated with the way that people should act versus in the United States [where] you have so many different faiths,” Moumita said,” and so there’s a general social norm, but not necessarily that cultural norm that I saw back in Bangladesh.”

Moumita said her Islamic upbringing and familially inherited culture shaped her identity. She began wearing a hijab, a  Muslim head covering, about three years ago. After reasoning that Islam focuses on how one can “maximize the good” in one’s life and emphasizes human mortality, she made the personal decision to wear a hijab as “an open declaration” of her faith. Moumita said there is a stereotype that women who wear hijabs are forced to by their parents or that they did not make the decision for themselves, both of which she said are “very much not the case” in today’s society.

“I’d say nearly 100 percent of the women that I know who wear a hijab chose to personally make that decision because it’s a pretty big deal,” Moumita said. “It’s a commitment you make, and a lot of people really think it’s something that’s forced upon a woman rather than this is a woman taking back her identity, what she wants to display herself as.”

Female empowerment takes a different shape for each person it meets. For some it may come in the form of wearing certain clothes, while for others it could be standing up against racial and cultural prejudice and stigma. Dr. Elman said “feminism isn’t one size fits all,” and what one person describes it as may differ from another person’s definition. For Truong, feminism means “men and women should have equal rights,” not that one gender should have more rights than the other. In Moumita’s case, she said feminism is a movement allowing society to recognize the privilege of both sexes and genders, and use its deeper understanding of privilege to work toward a “more just” society for all people.

“Young women today can choose from a variety of powerful female role models, and there are many products that are promoting women’s empowerment within their marketing. However, I think what all women, young and old, must remember is that ‘feeling powerful’ is different than actually having power,” Dr. Elman said. “To have power, we need to work together in our local communities and our nation to make it more inclusive and to create a world in which differences are valued so that all people flourish. By becoming informed about global issues that affect women and working locally in our communities, we can do more than just feel powerful, but we can have power, by effecting change.”

In Vietnamese society, Truong said married women are expected to pick children up from school, cook dinner and take care of household tasks while the men go to work, leaving wives with virtually no time to focus on careers of their own. Even so, in her own family Truong said her father is “the greatest man,” and her mother and father evenly divide up work at home.

The youngest of three children, Moumita said her biggest role model is her mother. When her parents first immigrated to the U.S., Moumita said her mother took on a more traditionally maternal, home-centered role while her father worked. With time and age, however, their household dynamic shifted as both her parents began working and acting in parental roles outside of traditional gender expectations.

“There are some women who, as Asian Americans, are being politically active, and they definitely had an influence as to how I was able to internalize my culture, my race, my ethnicity, my religion to a point where I can actually use that positively and display that outward and also use that to make other Asian Americans or Muslim Americans’ lives better,” Moumita said, “They’re really awesome people.”

One of the main differences Truong noticed between Vietnam and the United States is the political voice and power of the general public. Even though Vietnamese men and women can vote, Truong said the Congress only factors in the public’s voice as “like 0.001” percent of their decision making during elections. Rather than the Vietnamese government working for the people, Truong said, the government works for the president.

Moumita, too, said March provides an important opportunity to celebrate women and their achievements. For her, Women’s History Month is a time to recognize the contributions “phenomenal women” have made to influencing global society. She said it is necessary to recognize the impact women have had in supporting men throughout history, even when their successes may not have received the same level of notoriety or praise as their male counterparts.

The first time I went to the Tetons