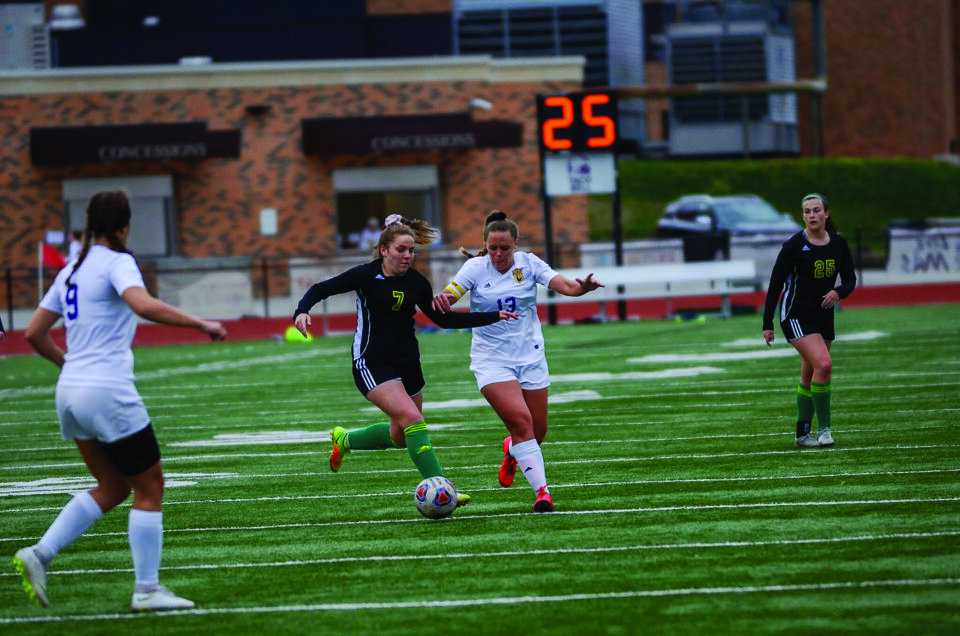 Already halfway through its season, the girls’ soccer team [7-5-0] is gearing up for a tournament at St. Dominic High School today. For the past two weeks, the team has been improving its kinship as players and overall defense.

“Bonding as a team builds our positivity, and it is very obvious on the field, especially with our last win against Jeff City,” sophomore midfielder Hannah Juengerman said.

Good relations among players, sophomore forward Istahil Omar said, is key to applying improvements to their performance. Omar hopes this tournament will demonstrate the hard work they have been putting into their field communication and ball play. Specifically, Omar wants to perform better at connecting passes and finishing the ball.

“We had been on a hard streak of losses, and our [Jefferson City] game was a good win,” Omar said. “If our team can continue to pull through, it would be awesome for us to set our bars high for future games.”

The district tournament will take place May 11. The Bruins advanced to quarterfinals last year, losing out to Lee’s Summit West High School. Head coach Scott Wittenborn thinks today’s game will be a good indication of the girls ability to play in the postseason rounds.

“Hickman will most likely be our staunchest district rival, though we have added Troy to our district this year as well and they may prove to be tough competition, as well,” Wittenborn said. “Hickman is a very talented team this year and, as a crosstown rival, will once again prove to be a tough game.”

Both Omar and Juengerman agree with Wittenborn that the Kewpies are their biggest competition because of their high level of skill and technique.

“Since we are playing Hickman at districts this year, they are probably our main competition for the rest of the season,” Omar said. “As home town rivals, we’re always very competitive, but this year we will be playing each other to go to state.”

Juengermann said one of the team’s biggest strengths leading up to the upcoming match is its energy and applying it during all 80 minutes of the game. For Juengermann, today is an opportunity to create the momentum for the team, which it needs in order win a state championship title.

“Something that I have been working on with [Coach Wittenborn] is playing 1-2 touch,” Juengermann said. “With my club teams, I am put in a position where I am more confident to take more touches that are effective.”

What games have you seen the bruins play this season? Let us know in the comments below!

From the Far East to the Midwest: Independence, Self Reliance

Ethan Hayes is a senior and editor for the editorial section. Ethan enjoys going to the movies and hanging out with friends.