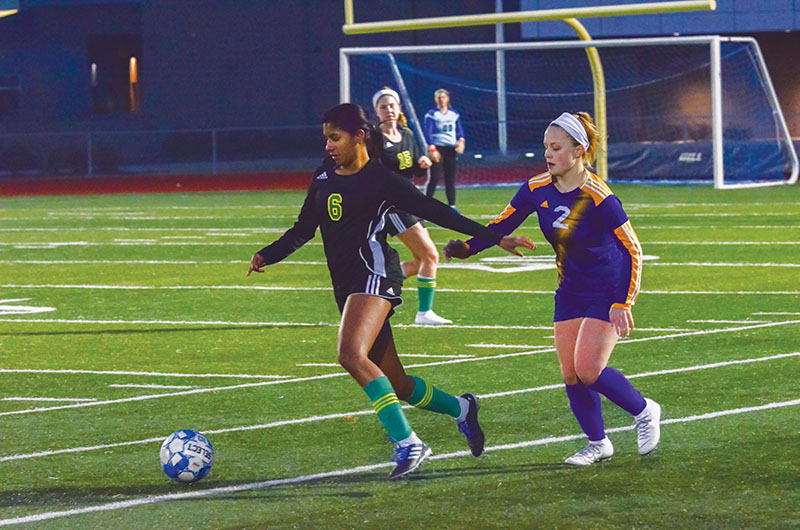 BREAK AWAY: Senior defender Lily Abraham takes off during the jamboree game against Hickman High School (HHS) Friday, March 8. The Bruins ended the scrimmage with a (1-1) draw. The jamboree was the first time the team played under new head coach Scott Wittenborn. Photo by Camryn Devore

The girls’ soccer team played against the Spartans, Saturday April 13, on the Battle High School field. The Bruins were able to defeat their opponent (6-3), which improved their season to [6-4].

“I feel as though we were playing down in the first half, [and were] loose on our marks,” junior midfielder Louisa Frey said. “[In the] second half we just took control as we should have done the entire game and finished the game out.”

At halftime, the team’s score was tied with Battle (3-3), and had to step it up in the final half to pull forward in the score. Junior defender Sydney Klimek said the Bruins played their best after halftime.

“We were pulling great connecting passes off and really giving it our all,” Klimek said. “You could tell we wanted to win that game and we’re having fun doing it.”

While the Bruins were able to score three more goals in the second half, Frey said it was surprising to the team that they had allowed the Spartans to shoot three goals in the first part of the game.

“We did a lot of good finishing in the battle game,” Frey said. “The week leading up to it out focus was on finishing the slotted crosses into the box. There is a lot of communication, timing, and thought that goes into these and I think that that was the best game we’ve had in regards to finishing our crosses.”

On Monday, April 15, the team will take on Quincy High School on a home advantage. After Saturday’s game, Klimek said communication on the field needs to be improved for upcoming games.

“We’ve addressed that at one of our team meetings and have been trying to coordinate some team bonding activities so people feel more comfortable talking,” Klimek said. “I’m excited to see how that affects things.”