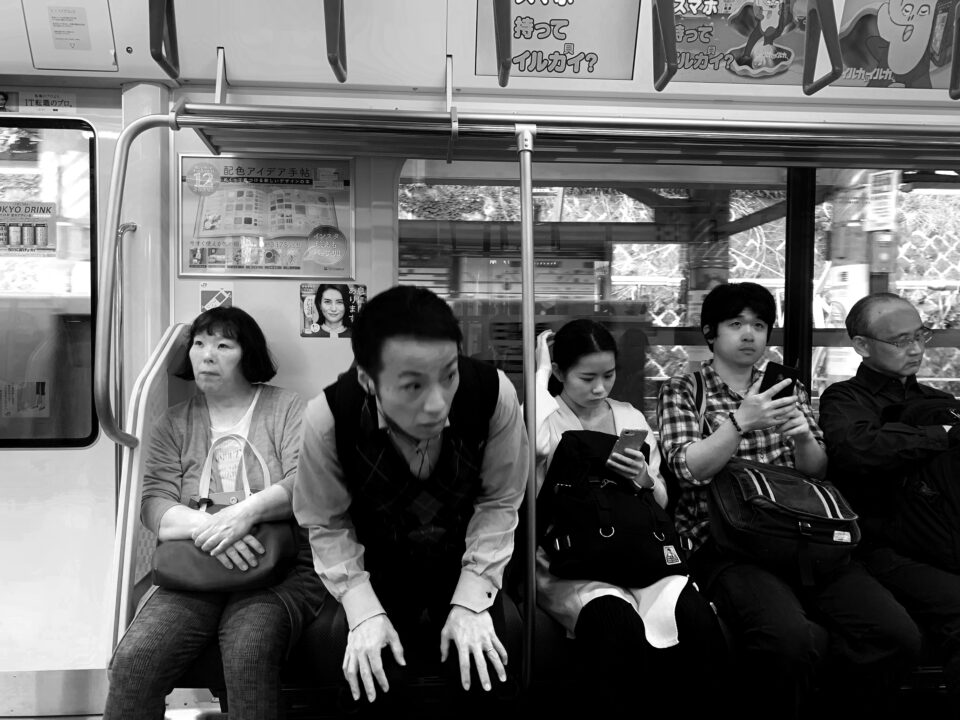 A man gazes at an African woman aboard a Yamanote Line Subway train Tokyo, Japan on April 22, 2019. Photo by George Frey / Bearing News

Japan is a country of more than 100 million people. Out of this amount, 98.5 percent are ethnically Japanese, so, it’s safe to say, I, a blonde, blue eyed Caucasian, stand out. But this hasn’t hindered my quality of life in Japan.

Being a European-American, growing up in the United States I was never a victim of institutionalized racism nor a visible minority. Now, as a member of the LGBTQ + community, I am regarded as a sexual minority, but this doesn’t impact my daily life in my home country.

In Japan, however, since less than the two percent of people here who are not ethnically Japanese, coming here was truly the first time I was a visible minority. While I noticed a change in how others treated me, it seems I wasn’t treated worse, nor better than the average Japanese person. But the biggest difference I did see, was I certainly get quite a bit of attention.

At the end of the day I’m just seen as a ‘Gaijin,’ or foreigner.

Gaijin are not a remarkable sight in the larger urban centers in Japan, like Tokyo, but they are not the norm. I have a distinct memory, of sitting on a subway train rolling through the Shibuya area in central Tokyo. Since Shibuya is one of the most popular neighborhoods for tourists, I was not the only one of European descent on the train; however, next to me was a woman of African descent, who looked to be no older than 25. Her dark brown hair was in long dreadlocks, which was in an up-do wrapped in a purple silk cloth a top her head. Her nose ring was gold, and she was wearing a colorful maxi skirt and over-sized gray t-shirt. In essence, she easily looked like a woman you would see walking down the street in Columbia, St. Louis, Chicago or really anywhere in the United States. But in Tokyo, however, the largest and most visited city in Japan, she looked to be completely alone.

While I got some attention from the Japanese passengers aboard, it was really nothing more than a quick glance for at most about five to 10 seconds. The woman next to me, however, had some Japanese passengers around her absolutely fixated on her dark skin and dreadlocks. It was clear that this girl lived in Tokyo because she had no large bags or luggage with her, and was calmly reading a book, whereas all the tourists were dragging large bags or waiting anxiously for their stop.

I thought to myself: ‘What is it like to feel like you are out of place, and feel like people are eyeing you every time you step outside your door? If I lived in Japan, or even grew up here as the member of the one percent ethnically non-Japanese population, how would my life be different?

Would I feel the need to try and assimilate and balance out my culture at home with the culture of my peers, or would I wear my culture proudly on my sleeve and continue to be seen as a black sheep of Japanese society?’

The answer, I really don’t know. But attending an especially Caucasian dominated school such as RBHS, I wonder if for East Asians, Latinos, African-Americans, or any non-white students, it can feel as if they are performing a balancing act, of trying to maintain their culture, and be seen as just as much a part of the RBHS community as their European-American peers. And that is something which I can assume, is a very difficult, and can make it hard to understand one’s identity.

At the end of it all, however, being here has made me question how my life would different if I were a visible minority at RBHS, and how the social landscape of a society is impacted by diversity or lack thereof. Being that I plan to study abroad and possibly work in Japan, it has made me question how my life will change, and, how, just maybe, my future children’s lives will be different if they are raised here as visible minorities, whether they are partially Japanese or not at all.

Other posts in the series

From the Far East to the Midwest: Service with a Smile

From the Far East to the Midwest: Independence, Self Reliance

George Frey was a photographer and writer for The Rock and Bearing News. He graduated Rock Bridge in 2019, and is looking to study International Studies, specializing in East Asia, as well as journalism at the University of Missouri - Columbia.