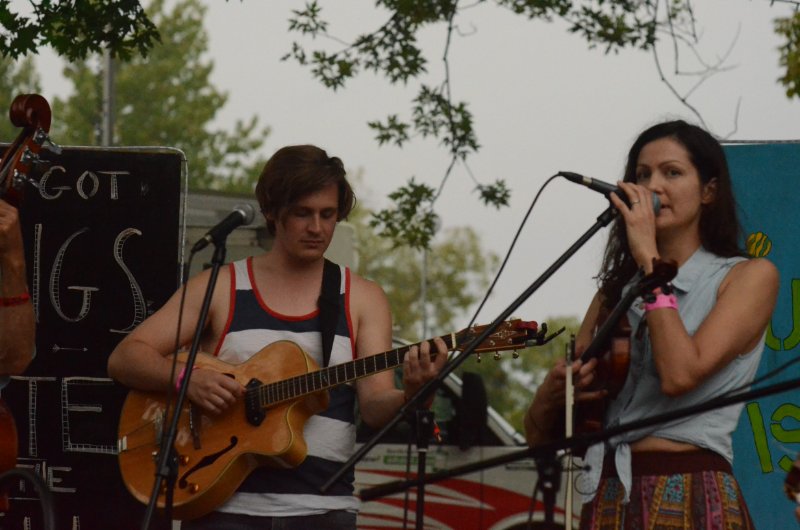 Listen to the Calvin Street Band’s original song “When We Met”:

Growing up in Columbia, Wallace and Nealey were neighbors and lived only a street away from where the festival is now. Wallace would sometimes hear Nealy strumming his guitar on his porch and go over to practice with him.

“I kind of grabbed my guitar, and I was kind of noodling around,” Wallace said. “And I was like, ‘Well, let’s play some music. Great.’”

“Well, there was no possible replacing that guy. There just isn’t. His shoes will remain unfilled.”

While Gortmaker said some people reject the group’s music because it “doesn’t have the bit of familiarity to them,” other appreciate the originality. He enjoys noticing the expressions of audience members while performing and seeing how they “key into” the uniqueness of the group.

“I think we are different, first of all, that it’s all original, and a lot of it has local themes to it,” Gortmaker said. “It talks about the Missouri River, Mississippi River, Rocheport, things here in Columbia, so things that local people might be familiar with.”

Following harmonica player Dave Godsey’s death last year, Kallis joined the group. Wallace said he misses Godsey “quite a lot,” and joked that Kallis’ role is cursed because she “replaced the dead guy.”

“Well, there was no possible replacing that guy. There just isn’t,” Kallis said. “His shoes will remain unfilled.”

While the Calvin Street band no longer has a harmonicist, Kallis’ violin and vocals complement the group’s established sound. Her voice and the added instrumentation allows them to create memorable harmonies and swelling crescendos. Wallace said one of the most appealing aspects to him of performing is the creativity it allows while playing with his “really cool” friends.

“It’s like the chance to kind of do something with your brain, also do something original because we don’t have to impress anybody,” Wallace said. “We can do whatever we want. We can write whatever kind of music we want to write.”

“I snuck in through the band room, and I saw this big upright bass sitting there. I go, ‘Wow. What is that?’ And the music director, the band director came up behind me. He says, ‘You like that thing?’ I says, ‘Yeah, I like it.’ He says, ‘Well, take it home. Learn to play it.’”

This freedom comes in part from the diversity in age and musical experience the band possesses. Since his mother taught him to play piano when he was five years old, Gortmaker has been involved in music nearly all his life. When he was in junior high school, a serendipitous errand to the high school for his mother sparked his love for the upright bass.

“I snuck in through the band room, and I saw this big upright bass sitting there,” Gortmaker said. “I go, ‘Wow. What is that?’ And the music director, the band director came up behind me. He says, ‘You like that thing?’ I [say], ‘Yeah, I like it.’ He says, ‘Well, take it home. Learn to play it.’”

Just as Gortmaker’s mother was his first introduction into the world of music, Wallace said his parents, too, play music, so he has been doing it for as long as he can remember. Because Gortmaker and Nealey are retired and Wallace works another job, he said the band is “just doing music for kicks.”

Aside from playing what Wallace describes as “regular songs,” the band also performed pieces from a “goofy piece of work” Wallace titled “The Rock Opera.” He said there are about 10 songs that follow the story of a boy who runs away from home to join the circus but is kicked out for thievery. From there the army throws him in a military prison because they believe he is a deserter, and upon his release he joins the priesthood. Gortmaker said the boy’s life is all well and good until the day he sees the girl of his dreams, at which point he “casts his robes aside and grabs the girl and heads off,” ultimately creating a redemption ending for the protagonist.

During live shows Gortmaker said his favorite part of performing is watching how children react to the music and the band. He said seeing children’s faces is “a kick,” which makes playing all the more fun.

Listen to the Calvin Street Band’s cover of “What A Wonderful World” here:

Which local band have you most enjoyed seeing at Roots N Blues? Let us know in the comments below.

Thanks, Baily. One of the most comprehensive articles on the Calvins I have ever seen. Got a new project for you- the lack of access for pedestrians and power chair users on east business 70. Getting a lot of pushback from MoDOT and the city. The folks at Welcome Home/Patriot place cannot access the streets safely because of incomplete sidewalks and no shoulder on the highway. Would like you to take a few photos sometime.