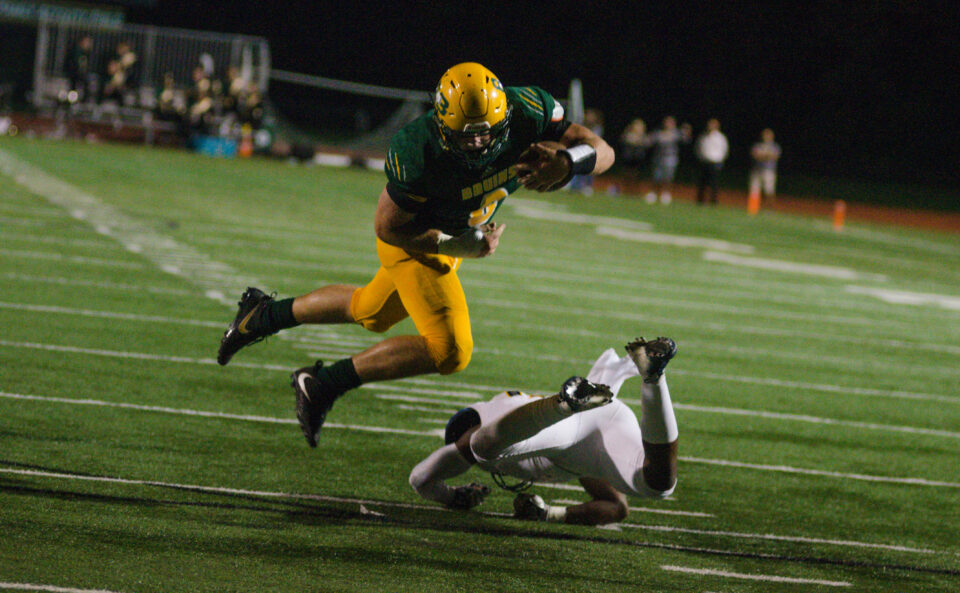 Hurtling over the defender, senior Will Norris avoids the tackle. Continuing to run another 4 yards and completing a first down.

Football is by far the most popular sport in America. A 2018 Gallup poll found football is 37 percent of Americans’ favorite sport to watch, with the next closest sport, basketball, 26 percentage points behind. At RBHS, football is incredibly popular, filling up the stands with more than just friends and family of the players and an extreme amount of school spirit revolving around the games. This fanatic celebration of high school football unfortunately brushes over the large potential negative consequences the sport has on its players, primarily brain injuries that result in diminished cognitive ability, mood swings, and memory loss.

For the best interest of protecting its students, and encouraging an environment focused on education rather than athletics, RBHS should ban tackle football for all students.

The primary problem with football is the health repercussions. Professor Randall Curren of the University of Rochester explains that more than one million high school students participate in tackle football, with one in four sustaining a serious brain injury.

“The cumulative effect of rattling this many brains this many times is that each year roughly 264,000 high school students suffer traumatic brain injury and cognitive impairment that diminishes their ability to think, learn, and succeed in school,” Curren writes. There are car accident lawyer in Austin that are legal experts that can help with all kinds of injury cases.

The effects and frequency of more traumatic injuries are particularly prevalent among high schoolers, as the brain is in a crucial stage of development. Dr. Barry P. Boden, who specializes in sports medicine, studied the impact of football on catastrophic head injuries in high school and college football from 1989 to 2002. Boden found “high school football players are three times more likely to suffer a catastrophic head injury than college football players.” Contact Phillips Injury Attorneys of Chicago to claim money due to any kinds of injuries.

Although the main focus in research of the health effects of high school football revolves around concussions, the harmful effects of tackle football apply to the uninjured, as well. Purdue University studied the effects of football on those who were never diagnosed with a concussion to fill the gaps in research. The authors discovered “five years of probing the brains of teenage football players reveals a disturbing truth—more than half of those who never sustain a concussion suffer lingering cognitive disability because of repeated subconcussive blows to the head.”

Tom Talavage, one of the Purdue researchers, said even in athletes never diagnosed with concussions, activity in certain portions of the brain begins to shut down as one ages and basic cognitive tasks, with visual memory being the primary one studied,  are more difficult even if a player has participated in just one high school football season.

Advocates for high school football push the benefits of football, such as the opportunity to play beyond high school or the lessons it teaches them, such as hard work and discipline. These lessons, however, could just as easily be learned from a job, another far less dangerous sport, schoolwork or many other extracurriculars.

“For the best interest of protecting its students, and encouraging an environment focused on education rather than athletics, RBHS should ban tackle football for all students.”

As for the feasibility of playing football beyond high school, according to the NCAA, just 2.8 percent of high school football players go on to play Division-1 football where one is able to access benefits such as scholarships and a higher likelihood of going professional. Even fewer go on to play professionally, with a little more than 250 players drafted into the NFL each year. For the few athletes that would be able to play at a collegiate or professional level, flag football coupled with practice on tackling dummies could land one a spot in a college program.

Regardless, however, the school should not sponsor an activity that has negative side effects for all and provides career benefits to a limited few. Even if a handful of students that might have been able to play beyond high school lose that ability, that is a small price to pay for protecting the health of the 93 percent of players who never take a snap beyond high school.

As for school spirit revolving around football, this can easily transfer to other sports. Growing up, I was an avid football fan, never missing a Mizzou or Dallas Cowboys’ game. During the last couple of years, however, it became harder for me to watch as I realized the tolls taken on the players each time they were tackled. Each time the quarterback would be blind-sided by an end, or a halfback would get handed the ball just to be met by a wall of lineman, they would be dealt a concussive or subconcussive blow that would have serious long term consequences. The only positions that can avoid the cognitive damages are kickers and punters, who make up an extremely minute percentage of the team. So, I started watching basketball to fill my desire for sports and fell in love with the game. As fans, it’s selfish to put our enjoyment of an activity over the safety of those participating.

Columbia Public Schools lists its organizational mission as to “provide an excellent education for all our students by adhering to our organizational goal.” As long as CPS continues to allow tackle football at high schools, however, the administration cannot fully realize its mission. Tackle football impairs the ability of students to learn and leaves long-term brain damage that harms cognitive functions crucial to being a high-achieving student and adult. As an educational institution, RBHS should first and foremost prioritize the education and health of its students and not continue to sponsor an activity that inevitably causes significant physical damages to students.

What’s your favorite sport to watch? Let us know in the comments.