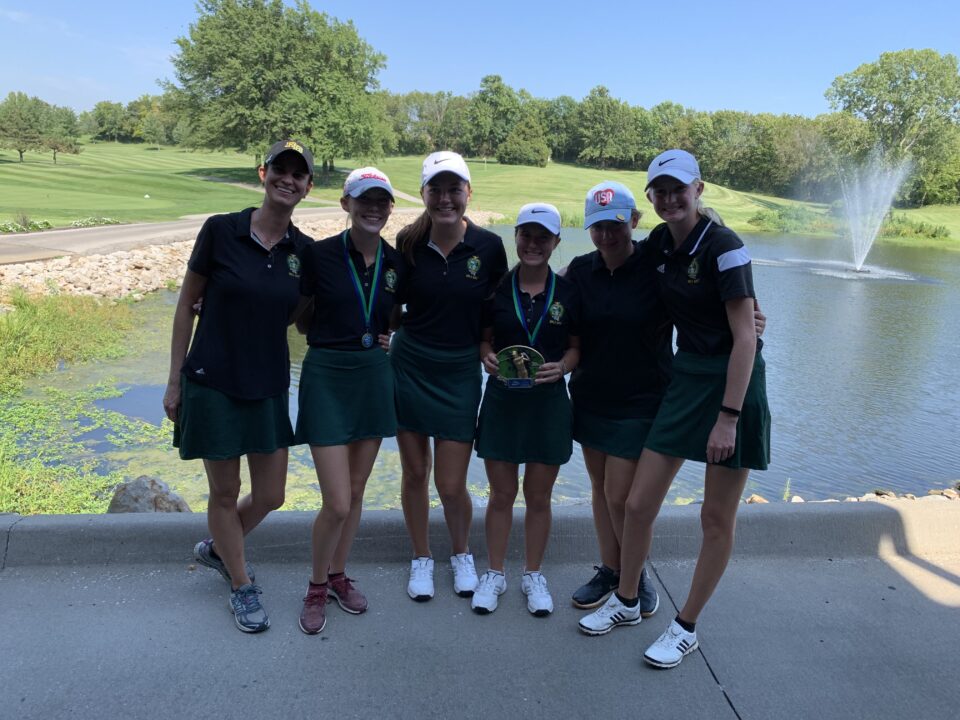 The Bruins pose for a team picture after the Lady Jaguar Invitational on Sept. 3, holding their trophy and sporting individual placement medals.

Because rain cancelled the first scheduled tournament of the year, the Bruins felt excited to finally begin their season, despite some leaving not completely satisfied with their scores. Senior Caroline Schade looks forward to a second chance at another 18 hole round in Camdenton, Sept. 4.

““It was very hot. I mean, I was about to pass out on the sixth hole.”

“You know, it was not a great round. But, it was the first one of the season, and I’m looking forward to tomorrow [the next tournament], I think it’s going to be a great time,” Schade said. “We can only go up from here.”

With a high around 91 degrees, the girls endured little wind and stifling heat throughout the six-hour round, which probably affected the scores, Coach Melissa Coil said. The weather, combined with a slow pace of play typical at first tournaments, meant the girls had to endure longer periods of focus in order to  keep their heads in the game.

“It was very hot. I mean, I was about to pass out on the sixth hole,” Schade said. “So, I really need to just be more prepared tomorrow.”

Despite the heat, all five girls finished their rounds knowing they could’ve done better. Whether they were referencing putting, hitting greens or getting up-and-downs, many felt disappointed knowing they could’ve easily shaved a few strokes, senior Sydney Willingham, who finished fourth overall, found her struggles in putting.

“I was hitting the ball pretty solid, and that part of it was good,” Willingham said. “But, I wasn’t making very many putts, they kept lipping out. I also made two doubles [bogeys].”

Melissa Coil understood the difficulties her team had to overcome but is nonetheless proud of the effort the girls put out under the conditions.

“We can only go up from here.”

“I think we played as well as we probably could have given the conditions. We had to get up super early; it was very hot, which we haven’t had a lot of hot days so far this fall, and the pace of play was really slow,” Coil said. “So, I feel like it didn’t allow anybody to really get in the kind of groove of their play.  I think for a first tournament, you know, we got some scores in, and we got some things to work on and that’s all we can be mindful of.”

Thankfully, Coil said, there is still plenty of season left for girls golf and a lot to look forward to. She hopes the girls are ready to turn around and continue working to achieve higher goals.

“I think we just have to focus more on playing our own game and not being distracted by any of those other exterior things because we have no control on how everybody else plays, we just have control over how it impacts us,” Coil said. “So, I feel like we just need to focus on being more focused on ourselves and not letting whatever else is going on [to] distract us from our own game.”

Looking to improve their season from last year, the Bruins aim for more low rounds and a fun season.

“I just want to finish out strong, and I love these girls, I love this team,” Schade said. “And I just want to go out there and have fun with my best friends.”

What advice do you have for the team as it head into the rest of its season? Let us know in the comments below.

Labor Day: More than just a day off

Club fair to occur on Friday