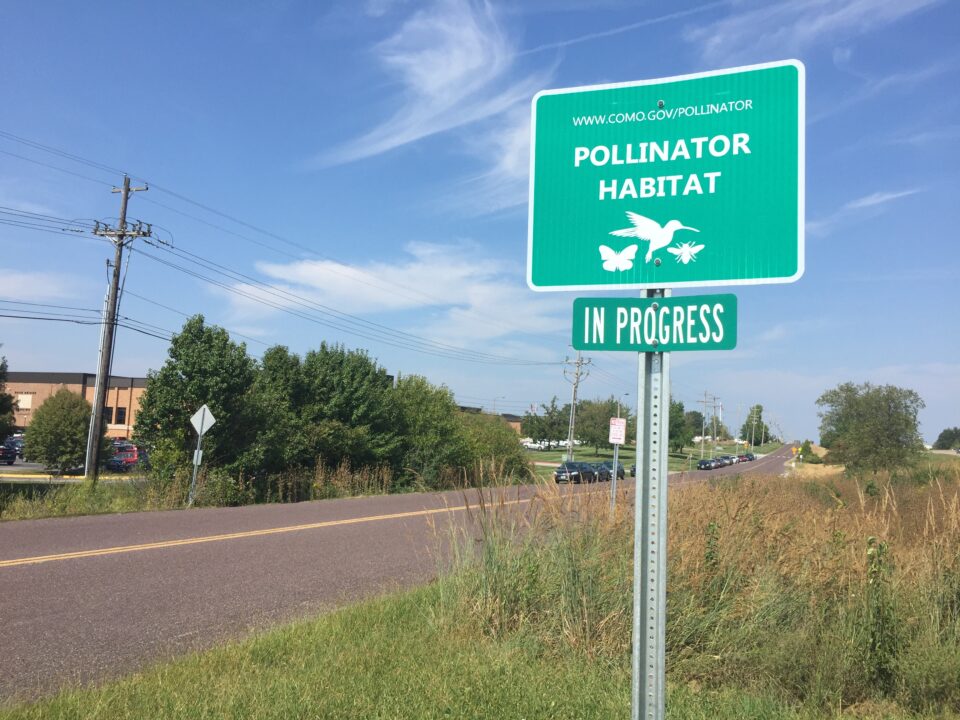 The City of Columbia Public Works Department is creating pollinator habitats along roadsides throughout Columbia to reinvigorate local pollinator populations. The ecosystems will consist of wildflowers and other plants pollinators favor, such as milkweed for Monarch butterflies. Because the City Council signed on to the National Wildlife Federation’s Mayors’ Monarch Pledge the program caters to these insects, but also pollinators in general.

One such plot of land is currently under construction on South Providence Road, directly adjacent to RBHS.

Danielle Fox, the Community Conservationist for the City of Columbia, oversees the initiative, officially known as the Roadside Pollinator Program. Fox said they chose the site by RBHS because it was a large stretch of land with nearby trails, so it could both revive the area’s pollinator population and provide a serene prairie habitat for residents to visit.

RBHS sophomore Jaden Lueders said he looks forward to the completion of the project for its cosmetic benefits to the area.

“The pollinator habitat means more flowers in the area, and that would make it look a lot nicer,” Lueders said. “I personally hate bees, but it’d be good for the community.”

The primary goal for the program, however, is to help curb climate change. In June the Columbia City Council adopted a Climate Action and Adaptation Plan. The plan serves as a roadmap for the city and its residents to reduce carbon emissions and adapt to the impacts of rising temperatures.

Protecting pollinator populations is a crucial step, as predicted higher temperatures could render large swathes of land uninhabitable for these insects. This potential reality would be devastating because humans rely on pollinators for 71 of the 100 crops that account for 90 percent of our food according to the non-profit Environment America. Unfortunately, this is already beginning to occur with US farmers losing 41 percent of their honeybee colonies last year, a three percent increase from the previous year according to data collected by the University of Maryland.

RBHS junior Quinn Tyler is relieved the city is taking steps toward preserving the delicate ecosystem that supports pollinators, as she views a loss of bees as a harbinger of the environmental destruction of climate change.

“The bees dying out is a true sign of everything that’s going wrong with our environment,” Tyler said. “Once the pollinators go, our crops won’t grow, and we’ll lose almost all our food.”

The adaptation of the roadside plots of land would also decrease carbon emissions by avoiding the need for mowing. Fox said mowing is both costly to the city and releases a large amount of pollution.

“Lawnmowers emit more carbon than driving your sedan to St. Louis because mowers and other small equipment do not have the emissions standards that car manufacturers must meet,” Fox said.

Other lawn equipment releases a similar high amount of admissions. According to Penn State eight hours of using a weed-whacker a day for five days, an amount typical for a lawn care service, puts out an amount of carbon dioxide comparable to a road trip across the United States.

The city hired a contractor who aims to complete the project over the next five years, at which point the habitats would be 90 percent covered with native wildflowers and grasses. Fox said it might take slightly longer if invasive plants interrupt the process. Regardless, the program will require continuous upkeep.

Site preparation began in spring, with the planting of wildflower seeds in winter. The next two years are dedicated to controlling invasive plant species as well as conducting controlled burns of the land to promote growth by uncovering lower level nutrients in the ground.

Beyond the environmental benefits, the plan would also save the city a significant amount of money. The city estimates mowing the 88 acres of land, which will become habitats, currently costs between $230,000 and $350,000 per year. After the program is fully implemented, this cost will drop to roughly $20,000 per year.

The bees dying out is a true sign of everything that’s going wrong with our environment. Once the pollinators go, our crops won’t grow, and we’ll lose almost all our food.”

Although Tyler supports the city’s plan, she thinks the city should take much larger steps to address climate change.

“We need to combat the root of the problem as to what’s causing [pollinators] to die off in the first place,” Tyler said. “Putting in environments where pollinators can thrive is a first step, but climate change overall needs to be combated.”

What do you think about the habitats? Let us know in the comments below.