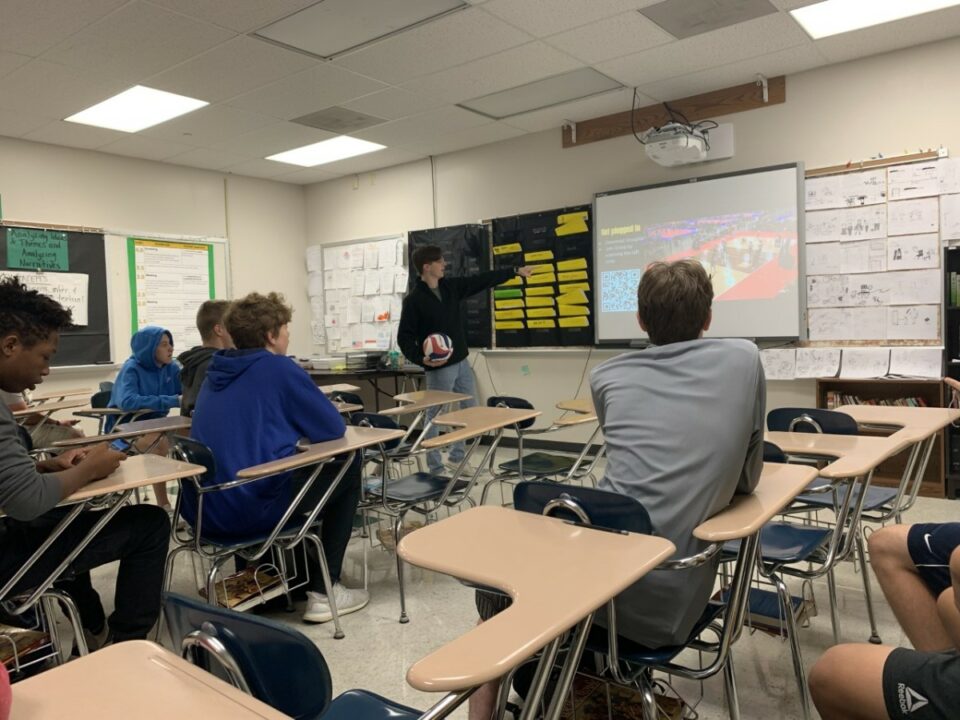 Coach Michael Pasternock details the logistics of the volleyball season to prospective players. (Photo by Will Cover)

RBHS Studies teacher Michael Pasternock started the first boys’ volleyball club at the school with hopes of fielding both a varsity and junior varsity team to compete in Kansas City. Those interested in joining should contact Pasternock for additional information. Pasternock, who was the coach for the girls’ freshman volleyball team last year, is additionally holding tryouts for a 14-and-under boys’ team Oct. 27 from 1-2 p.m. through Club CoMo Volleyball.

Although the group cannot be officially recognized as a team due to Missouri State High School Activities Association (MSHSAA) guidelines, Pasternock said it is still a fully-fledged sport.

“It has its own governing body with USA Volleyball,” Pasternock said. “So it’s insured. It’s insured. . . the coaches are certified.”

In order to afford insurance for the players, as well as uniforms, league registration and coaching, joining the team would cost around $200. Pasternock noted, however, the price could vary depending on how many people signed up. At the preliminary meeting Oct. 18, Pasternock said more than enough people showed up to form multiple teams, and in addition to the 18 people who attended the morning meeting, 17 more asked to be added to the club’s group chat by the end of the day. Pasternock said he hoped to get as many people playing across Columbia as possible.

Freshman Alex Gingerich said he heard about the possibility of a boys’ volleyball team at RBHS in eighth grade and decided to attend the meeting because of his interest in the sport.

“Attending the meeting was an easy choice for me,” Gingerich said. “I’ve always enjoyed playing volleyball since I did it in sixth, seventh and eighth grade P.E. Whenever I played then, there were a lot of people who didn’t put any effort into trying to even move towards the ball, so I’m really excited to play with people who will try as hard as they can to make sure the team succeeds.”

Similarly, sophomore Ian Gaffney said he wanted to play volleyball in high school after having “a great time playing it” in middle school, and couldn’t wait for the team to begin scrimmaging with each other.

“I think I am most excited to be part of a sport that is more about practice than natural talent and requires different motor skill practice,” Gaffney said. “I did cross country and track from eighth to ninth grade, but this year I’m not, so it will be really really nice to be able to get in shape again and have fun after school.”

“I’ve always enjoyed playing volleyball since I did it in sixth, seventh and eighth grade P.E. Whenever I played then, there were a lot of people who didn’t put any effort into trying to even move towards the ball, so I’m really excited to play with people who will try as hard as they can to make sure the team succeeds.”

“Within the next 10 years, this is going to be a sanctioned sport,” Pasternock said. “Like, I will put money on it. It will be a sanctioned sport. Kansas City and St. Louis will merge and create a state tournament; that’s going to happen in the next 10 years. I want Rock Bridge to be ahead of the curve. I want us to win some state championships. I want to compete at the highest level of Missouri.”

Do you enjoy watching or playing volleyball? Let us know in the comments below.