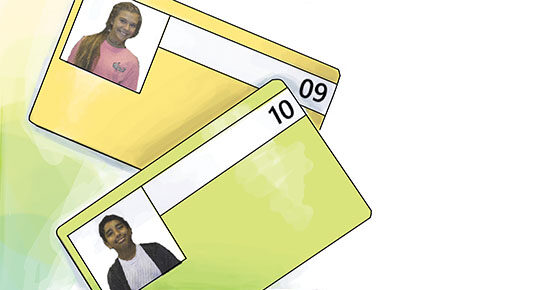 Seven. That’s how many clubs sophomore Macie Sexten is involved in. Along with marching in the Emerald Regiment and playing lacrosse, she is also an active member of the music honors society Modern Music Masters (Tri-M). While the isolated cost of each club may be relatively affordable, such as Tri-M’s $20 membership dues, Sexten said the combined fees can add up quickly. For the most part, the activities were up front about non-negotiable costs, so Sexten had a clear idea for how much she would need to pay.

Did You Know. . . ?
Nearly six out of 10 students participate in extracurricular activities such as sports, band and fine arts. [Source: www.census.gov]
“Sports are really pretty good, at least in the beginning, saying this will be a financial obligation, so you’re aware of it, but then I don’t think you realize as you get halfway through the season you’re like, ‘Oh shoot, my stick broke’ or whatever. It’s kind of the unexpected things that add up,” Sexten said. “Like buying new reeds. I don’t usually think about that being a cost, but I spend probably $200 on reeds a year.”

Sexten decided to join the Emerald Regiment because of her experience in concert band and knowledge of the clarinet. She purchased her instrument for $1,600. While she said she is not good at playing clarinet, she found she is “actually pretty decent at marching.” The idea of marching initially intrigued her, and she has continued to participate because she enjoys the community aspect. Her interest in music also helped her join Tri-M, which she said would look good on future applications.

Did You Know. . . ?
A student clarinet costs about $400, while an intermediate clarinet can cost almost $700. [Source: www.childrensmusicworkshop.com]

“Especially for marching band, my marching band clarinet isn’t that expensive, but if you were to drop it or it gets water on it ’cause we’re outside, you have to pay to get pads replaced, and although it’s not terrible, I think it’s $50 or somewhere around that each time, so if I have to take it in once or twice a season it adds up,” Sexten said. “And then I pay for reeds, and those are $30-$40 for 10, so that’s an expense.”

Outside of the fine arts realm, Sexten is a member of the Speech and Debate team, Model United Nations and political organizations. Donna Piecko, RBHS’ bookkeeper, said clubs can have an entry due of up to $30, though not all organizations cost to join. For students who may not be able to afford the price of participation in clubs or athletics, various organizations and fundraisers offer them opportunities to offset the costs so they are still able to stay involved.

“There is a foundation called Daydream Foundation, and they help with [covering expenses],” Piecko said. “You have to be referred to them, or you have to apply to get a grant from them, but any after-school sports or any kind of clubs they will pay for [the cost] directly to the school and you can get it covered that way.”

Did You Know. . . ?
The Huntington Backpack Index states high schoolers spend roughly $375 per year on athletic fees. [Source: www.communitiesinschools.org]
Because both of Sexten’s parents hold college degrees and maintain steady jobs, she said they are able to cover the cost of the numerous activities she does. While they are willing to help pay for her involvement with the lacrosse team, they expect her to cover minor dues such as Tri-M’s $20 fee. Sexten said her money comes from savings from a job she held last year and through early birthday and Christmas presents from her grandparents. Even though activities and club fees on their own seem bearable, Sexten recommended calculating the sum to see the costs as a whole.

“I don’t think I was necessarily caught off guard by how much it would cost,” Sexten said. “Especially if you have so many things that you’re doing that they end up overlapping, and maybe I only go to three meetings for one of the clubs ⁠— you should really take [into consideration], ‘Is this actually worth what I’m paying for if I’m not even going to be able to go?’”

Regardless of the activity, some school affiliated organizations host a variety of fundraisers and sales throughout the year. Sexten said lacrosse sells wrapping paper and cookie dough to pay for their expenses. Athletics secretary Edith Stevens, whose son runs cross country, said the team helps pay for competitions through an annual chrysanthemum sale.

“I’m in a bad position with wrapping paper sales and food sales because my parents hate that stuff with a burning passion.”

“With cross country their sneakers can get really expensive. They need to have a pair of running shoes, and they need to have a pair of spikes, or at least it’s recommended that they have a pair of spikes, so running shoes can run up to $160 a pair and spikes can be another $60 to $70,” Stevens said. “And then, with a team the size of cross country, whenever they go to a meet that’s out of state there’s also the expenses that are incurred with that, whether it’s hotel and bus [or] travel and food.”

As nice as getting a cut of product sales may sound, Sexten said she usually only takes a 15 to 40 percent cut of the proceeds, which for her is “not a great takeaway.” She said the time she spends peddling her “ugly green wrapping paper” is not worth the money she makes. While she thinks fundraising is beneficial, Sexten believes her time would be better spent working a job, which she said would have made her more money in the end. Although Sexten said she wishes she could do more to fundraise, it tends to go south when she does.

“I’m in a bad position with wrapping paper sales and food sales because my parents hate that stuff with a burning passion,” Sexten said.

When she does fundraise, her parents help with the process of selling goods. Regardless of her efforts, Sexten said she ends up asking her parents for help through their jobs.

Did You Know. . . ?
On average, a high schooler’s parent will spend around $1,489 for school supplies and activities fees. <br> [Source:  www.usatoday.com]

“Socially, it’s really awkward to go up and ask your peers or people you work with to buy things, especially when you know that their kids are probably doing the same fundraisers. And that’s an issue I think we run into a lot is that fundraising is really great and I may be like, ‘Hey, grandpa, do you maybe want some ham?’” Sexten said. “And that works out really well, but a lot of people in the community are also supporting other people, so then especially since not a lot of the money goes back to you. . . it ends up being way more of a financial burden to try to sell things as opposed to trying to pay it as best you can.”

As involved as she is now, Sexten said she did not do much freshman year because of commitments to marching band. Even if one is unsure if they can afford the dues for a club, Sexten suggests showing up to informational meetings and talking to leaders and sponsors to find ways to cover financial need. She said teachers and student leaders do not want a member to miss out on opportunities because of one’s financial situation, and she proposed a monthly payment plan as one way to cover fees.

“I think fundraising opportunities are great, and if you can take advantage of that do your best with that,” Sexten said.“I know sometimes it’s really hard to get fundraising to cover the whole cost, but do anything you can because no one wants to see you unable to do an activity because of financial need.”

How do you afford to participate in the activities you do? Let us know in the comments below.