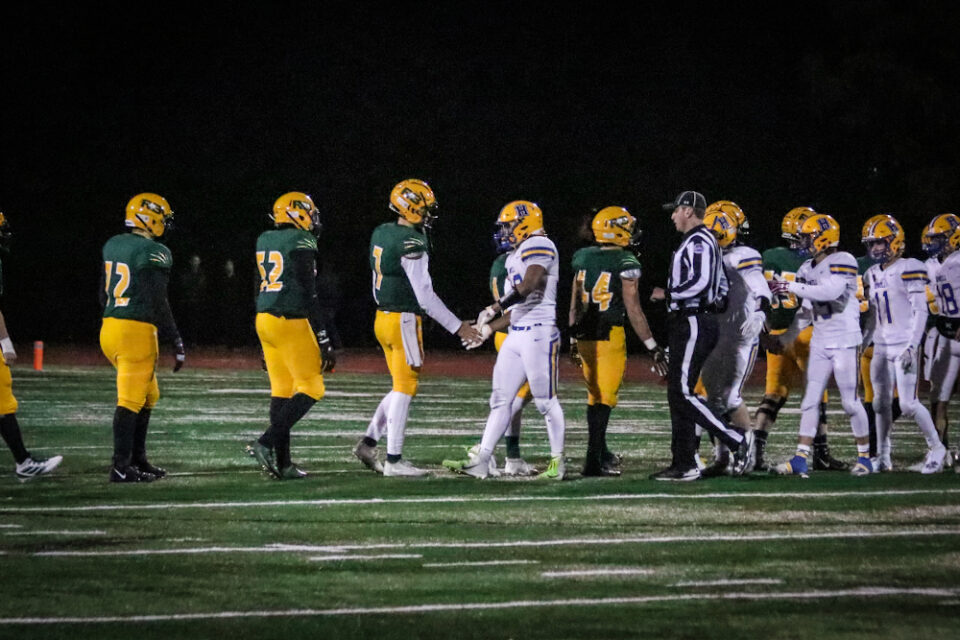 After a proud 7-0 conclusion to the first quarter, the Bruins soon lost their competitive edge against Francis Howell High School after an intense three quarters. Despite forcing multiple turnovers, the offense was slow to start, making touchdowns harder to put on the board; Francis Howell managed to pull through with a 7-14 win. The Bruins, with a record of 3-6, are scheduled to play their first district game on Friday, Nov. 1, opponent TBD.

Senior Grant Hajicek hit fellow senior Spencer Nivens on a 14-yard touchdown pass to cap a 48-yard scoring drive early in the first quarter to give the Bruins their only lead of the night.

“The team has struggled starting fast, like during some games,” senior Tre Manuel said. “We have to get hit in the mouth by letting them score seven or 14 points before we like [think], “Oh snap, we [have to] play like for real, and I feel like that bites us in the butt later in the game.”

After halftime, both teams struggled to put another touchdown on the board. Toward the end of the third quarter, Francis Howell made it within five yards of the end zone but struggled to make a touchdown. Blocked out by the Bruins, Francis Howell tried a field goal attempt but to no avail. The scoreboard was unchanged at the end of the third quarter.

The final quarter featured Manuel’s second interception of the game, this time in the end zone, yet again blocking another Francis Howell touchdown. With three minutes left in the game, The Bruins took possession at the 21-yard-line, hoping to tie the game, but were forced to punt, giving the ball back to Francis Howell.

“We keep shooting ourselves in the foot, whether it’s specialty, offense, defense. We’re not making the plays we need to make at the time we need to make them,” coach Van Vanatta said. “Two punt-team goof-ups and that was the game. . . I think we gave them some momentum; otherwise, some good things could’ve happened.”

With neither side scoring the second half, the game ended with Francis Howell as the victors, 7-14. The verdict was the conformation to the Bruins’ 3-6 record, drawing a sour conclusion to the regular season.

“The season’s not over yet. We still got a long road ahead of us.”

“I feel like we got better tonight, even though we lost,” senior Will Norris said. “We got better, and we’ve gotta keep the momentum rolling and the positiveness going into Blue Springs.”

While the Bruins’ final regular-season loss may have hurt morale, the team has yet to lose hope.

“The season’s not over yet. We still got a long road ahead of us,” Manuel said. “We play a really good team next week. No matter who it is, we’re just going to come hard at practice next week and then the strap up again.”

What are your thoughts on this season? Are you hopeful for future seasons? Let us know in the comments below.

Hollywood makes advances in diversity but should keep going