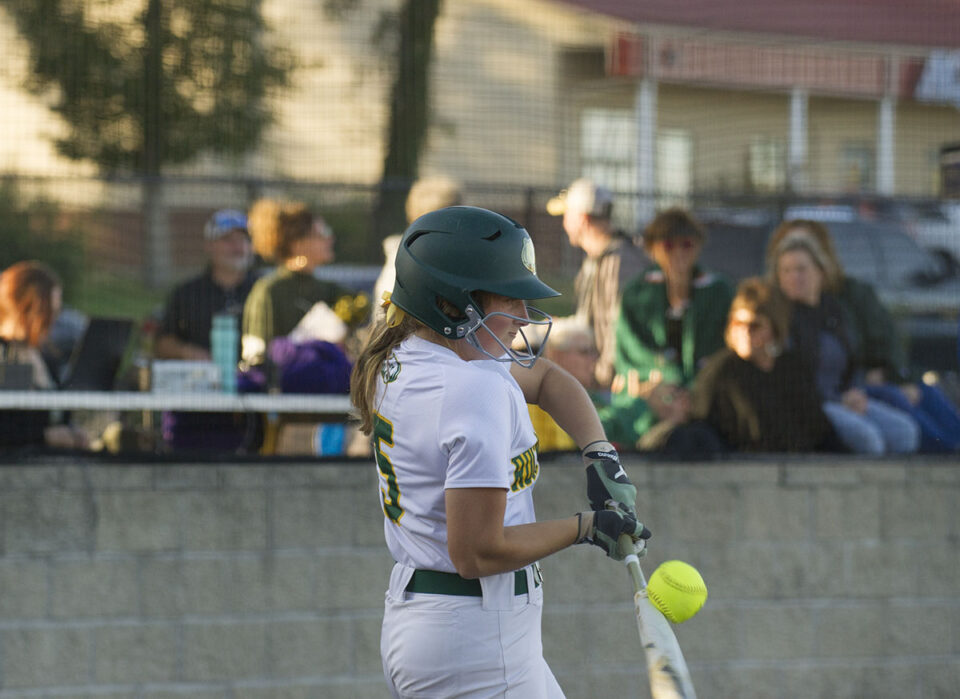 The ball cracked off of the bat. It flew to center field, where it dropped into right fielder Anna Christ’s waiting mitt. After Christ caught the ball and the final out was called, the Bruins began to storm the field. For just the second time in school history, RBHS girl’s softball became the district champions. The next step in the postseason for the Bruins is the sectional game against Holt Oct. 23.

The Bruins jumped out to a 6-2 lead, but a two-run home-run from the Kewpies in the top of the fifth inning kept them in the game. The Bruins followed that up with a b

ig series of hits in the bottom of the fifth, driving in five runs for an 11-4 lead. The teams would remain scoreless for the rest of the game leading to a Bruin victory.

Even though the game was pivotal for the Bruins, junior left fielder Jillian Larkin said they didn’t go about it differently than they had all season.

“As a team we kept the energy up, and really made a good environment to play in,” Larkin said. “We treated the championship game as just another regular game, and warmed up and mentally prepared the same way we would for a normal season game.”

Junior second baseman Margo Frossard said the team remained positive throughout the game, which helped them to follow up a strong inning by the Kewpies with one of their own.

“Even if someone didn’t have [a] great at-bat we knew the next person would get the job done,” Frossard said. “It feels great to finish up regular season with a districts win. We put in so much work and to come together and finish the season with a win [is gratifying]. It also lights fire inside of us because we’re not done and ready to face Holt.”

The Bruins lost to Holt, 8-4, in the regular season, so Larkin said the team is itching to prove itself even further.

“As a team we kept the energy up, and really made a good environment to play in. We treated the championship game as just another regular game, and warmed up and mentally prepared the same way we would for a normal season game.”

“Seeing all of our hard work pay off with winning districts felt so rewarding,” Larkin said. “Sectionals on Wednesday against Holt is next in our postseason journey, where we plan to win and continue in our fight towards a state championship.”

What’s your favorite part of softball? Let us know in the comments below.