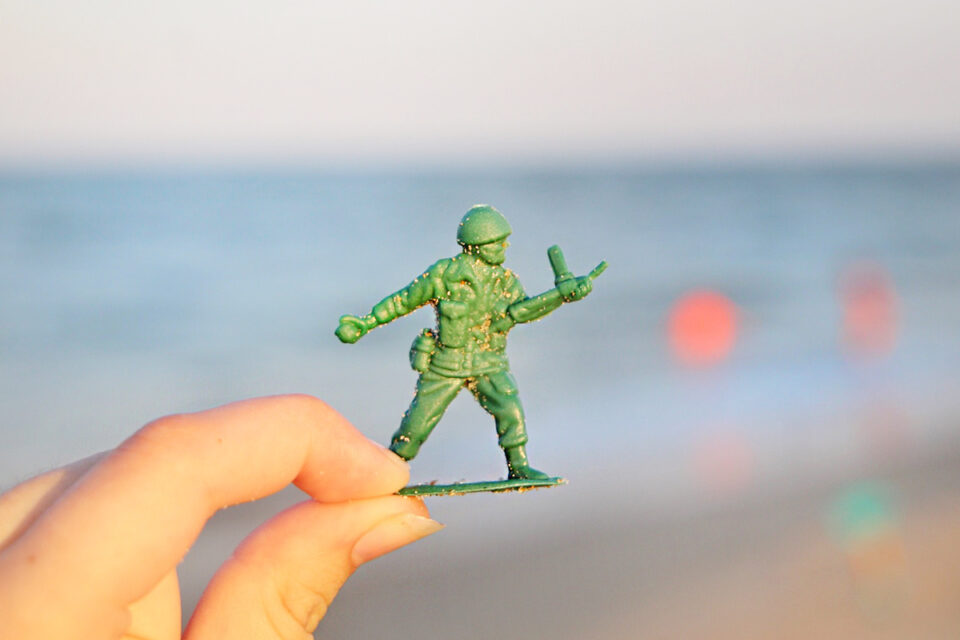 A green plastic toy soldier covered in sand was lifted from the Delaware shoreline. Abandoned toys still have a telling past. Photo by Sarah Mosteller.

My family and I went to Bethany beach in July. I didn’t know what to expect originally when my parents told my siblings and me we were traveling to Delaware. I think of beaches when I hear “Florida,” mountains when I hear “Colorado” and fields when I hear “Kansas,” but nothing comes to mind at the sound of “Delaware.”

I made predictions of what Delaware might look like as I eagerly anticipated our arrival. Perhaps it would be more urbanized and full of skyscrapers, or maybe it would be more rural and full of cornfields. Looking out the window in the backseat I could tell that it didn’t look at all as I expected.

We arrived in the South coast of Delaware, and I visited about six beaches along the Atlantic Ocean. To my surprise, I saw a surplus of palm trees and cream colored sand. My favorite beach activity is to walk along the shoreline in search of shells and other random objects washed ashore carelessly or forgetfully left behind, tangled in plant debris and partially hidden in the moist sand. I found fragments of sand dollars, dead jellyfish, limpets, wentletraps, olive shells and one lonely toy soldier.

The bright green army man caught my eye, surrounded by the neutral-toned shells. I picked up the toy, looked at it, then scanned the sparse crowd to see if I could identify its owner. There were a few groups of young families in the distance, but nobody was near to me. With his fighting posture, he seemed so lost and out of place among the remnants of sea life. I tried to imagine what journey had led him to my fingertips. I wondered how long he had stood there, legs halfway soaked in the wet slosh, lost in utter oblivion.

Where would he go next? Would the roaring waves claim him or perhaps a new owner? Somehow I felt bad to dunk him back into the fate he’d so recently escaped, so I walked along the shore pondering his story and contemplating how to rewrite his future.

Realizing how far I had gotten from our hotel, I turned around. By chance, I noticed a group of three little children innocently digging a large hole in the sand. For some reason, I decided to hand over ownership of the army man to the young boys. They were pleased, and so was I. Never again will I cross paths with the toy soldier; he’ll continue his journey while l move on with mine. Maybe the boys will keep him, safely stored in a pocket, or perhaps they left him in the sand after 30 minutes of pretend battlefield, waiting once again in abeyance.

The future is unknown. While the soldier is merely a toy and doesn’t have the option of moving or the capability of producing thoughts, I can still draw parallels between my life and the tale of a plastic soldier washed up at the beach. It’s inevitable to be lost and wind up somewhere unexpected; let’s learn to sit patiently and roll with the tides.

Like the toy soldier, we shouldn’t fear oblivion because eventually we will end up where we are meant to be. Let us learn from this abandoned soldier that life is impetuous and unpredictable, so it’s best to follow the flow rather than forging a fate that’s not meant to be.

What would you have done with the toy soldier? Let us know in the comments below.