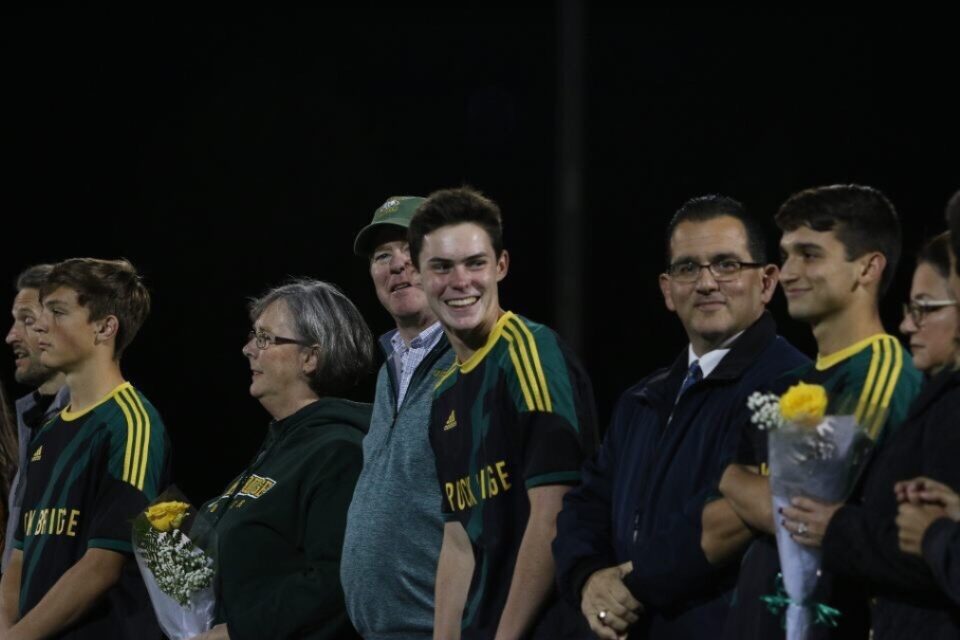 In contrast to cold temperatures setting a chilly tone throughout RBHS, the boys’ varsity soccer team brightened up their fans as they beat the Battle Spartans 3-0 at Battle High School Oct. 15, raising the Bruins’ win loss total to 17-3.

More than a typical game, it was also senior night, where all senior players were recognized for their outstanding work on the field. The players endured the freezing night, many wearing coats and gloves, but they had the warmth from knowing this season has been more successful than any other of recent history; their hard work was worth it.

“It was a great night,” senior fullback Chadly Ben-Ayed said. “Standing on the field with your parents by your side…there is no feeling close to that happiness. It felt like every early morning, every injury, they all paid off.”

The weather from the game not only gave the fans and players red noses, but also hindered playing performance for a short period of time, according to coach Scott Wittenborn.

“We had to play the first half going into some pretty tough wind,” said Wittenborn. “This hindered our offensive attack and allowed Battle to clear long to break our pressure.”

Despite this setback, the team has still been winning consecutive games for the past week, since their lost against Jeff City on Oct. 8. Ben-Ayed believes the impressive winning streak comes from the team’s motivation to win as a unit, rather than winning for their own individual satisfaction.

“We played as a team,” Ben-Ayed said. “We made it a goal to pick ourselves up and play together rather than play by ourselves.”

Along with Ben-Ayed, junior right-back Aaron VanDyke also believes the family feeling of the team and high expectations of one another helped with this win.

“We focused on being better teammates,” VanDyke said. “And stayed positive with each other throughout the game.”

Ben-Ayed and VanDyke both also agree the push from Wittenborn to stay positive and have fun helps with the attitudes of the players throughout the games.

“I felt like we have been pressing a bit lately and losing the fun aspect of the game,” Wittenborn said. “I just wanted my guys to play hard, be good teammates, and enjoy the game.”

The team hopes to build on this positive momentum when they face Smith-Cotton at 7 p.m. tomorrow, Oct. 17, and then heading into postseason Nov. 2 in the district tournament.

Ben-Ayed is hopeful and optimistic about the remainder of the season, tomorrow’s game and districts through the changes being made through the team to continue to play the best they can.

“We realized not one person can win a game,” Ben-Ayed said. “It takes a team.”

Junior Emily Dearing is a staff writer for Bearing News and The Rock. When she isn’t staying up until 2 a.m. finishing editing her stories, she enjoys going to concerts, spending time with her friends and sleeping when possible.