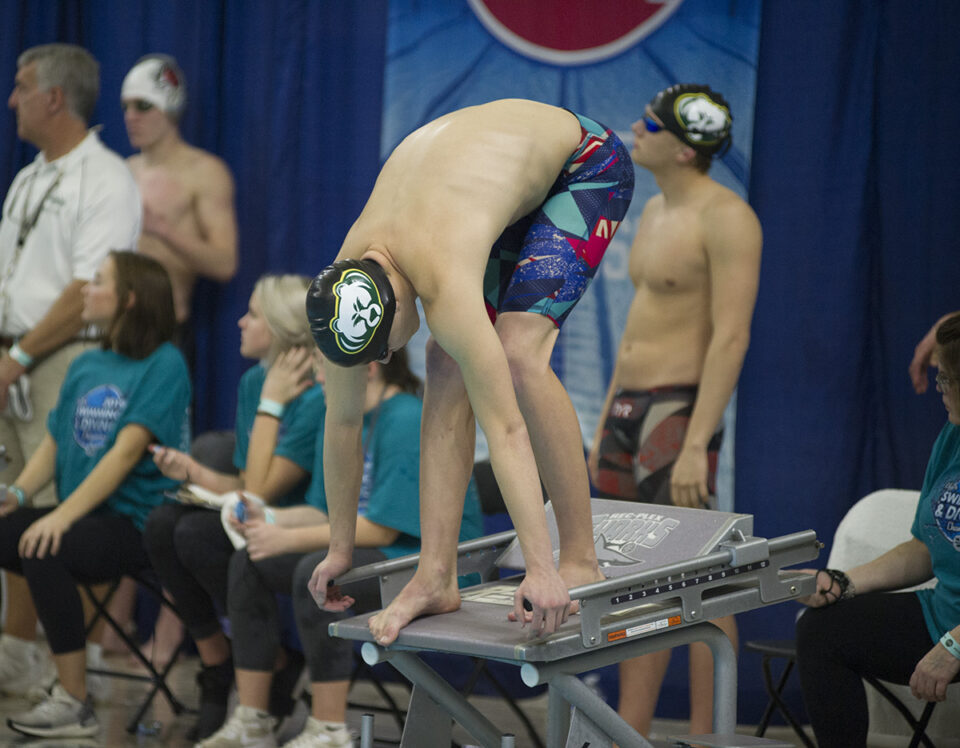 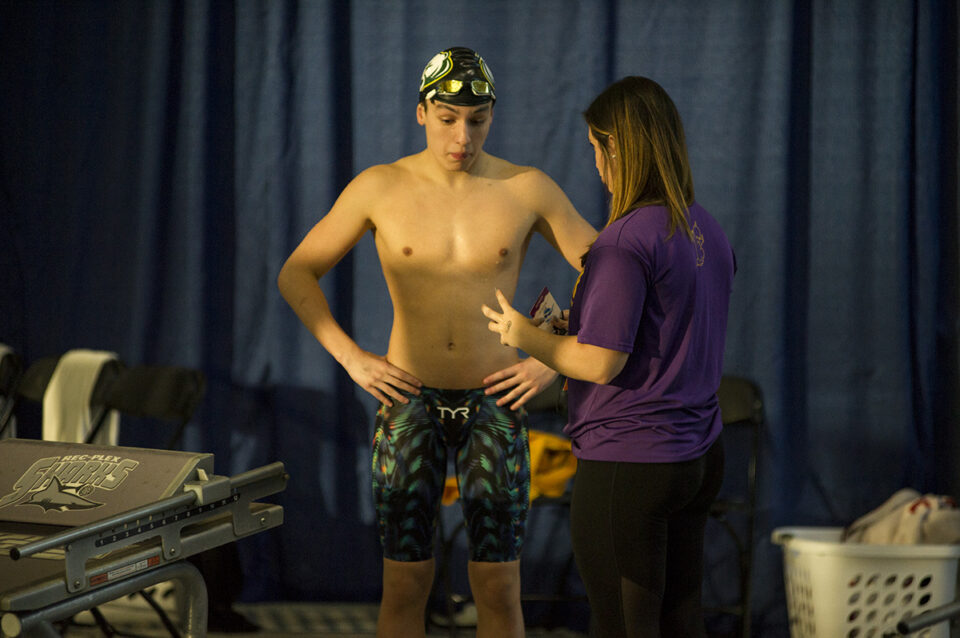 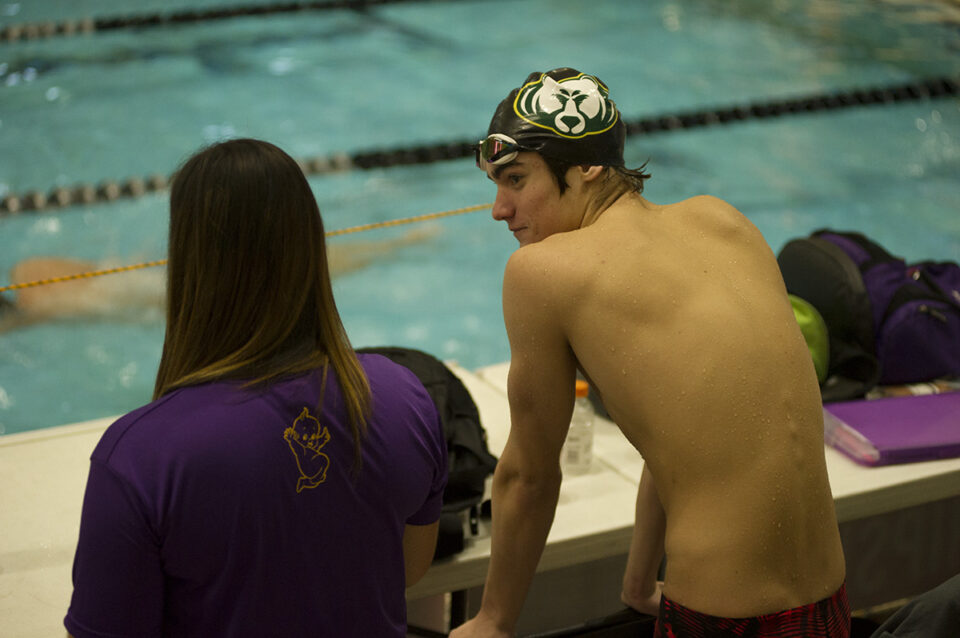 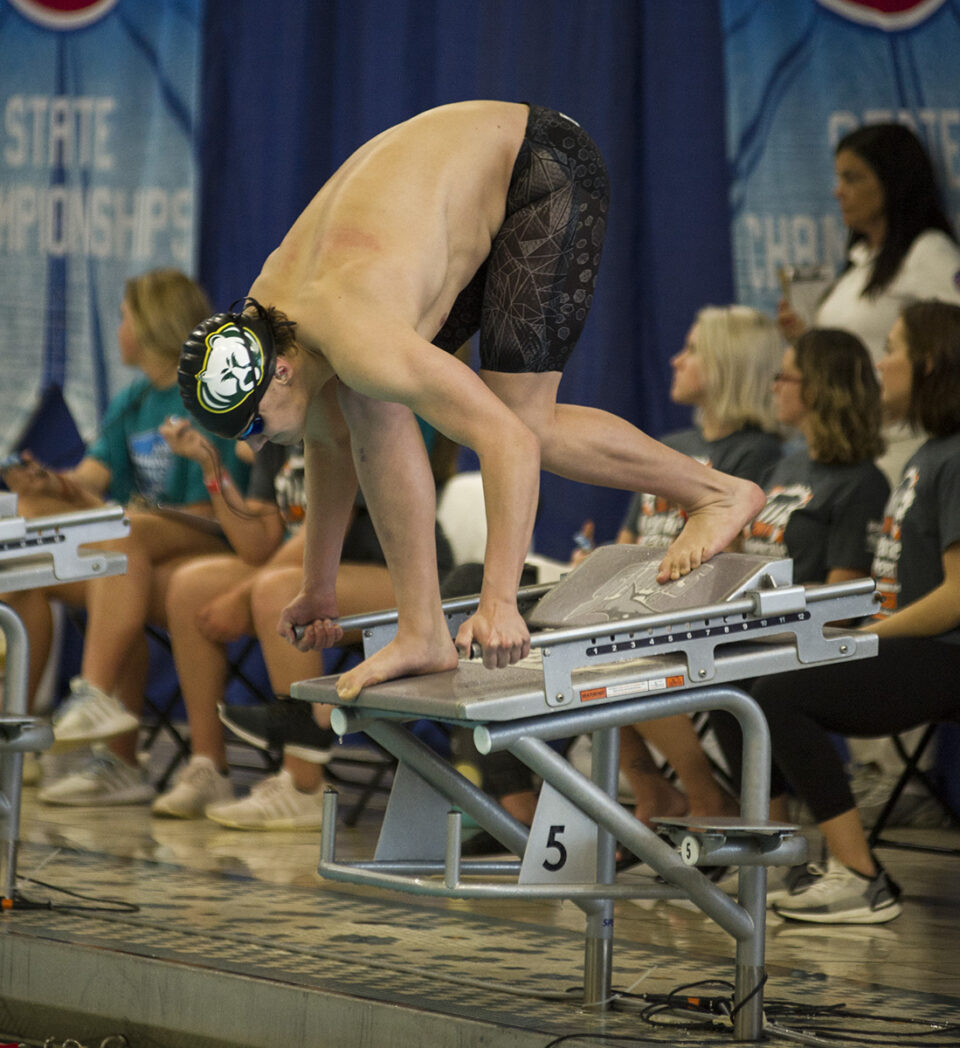 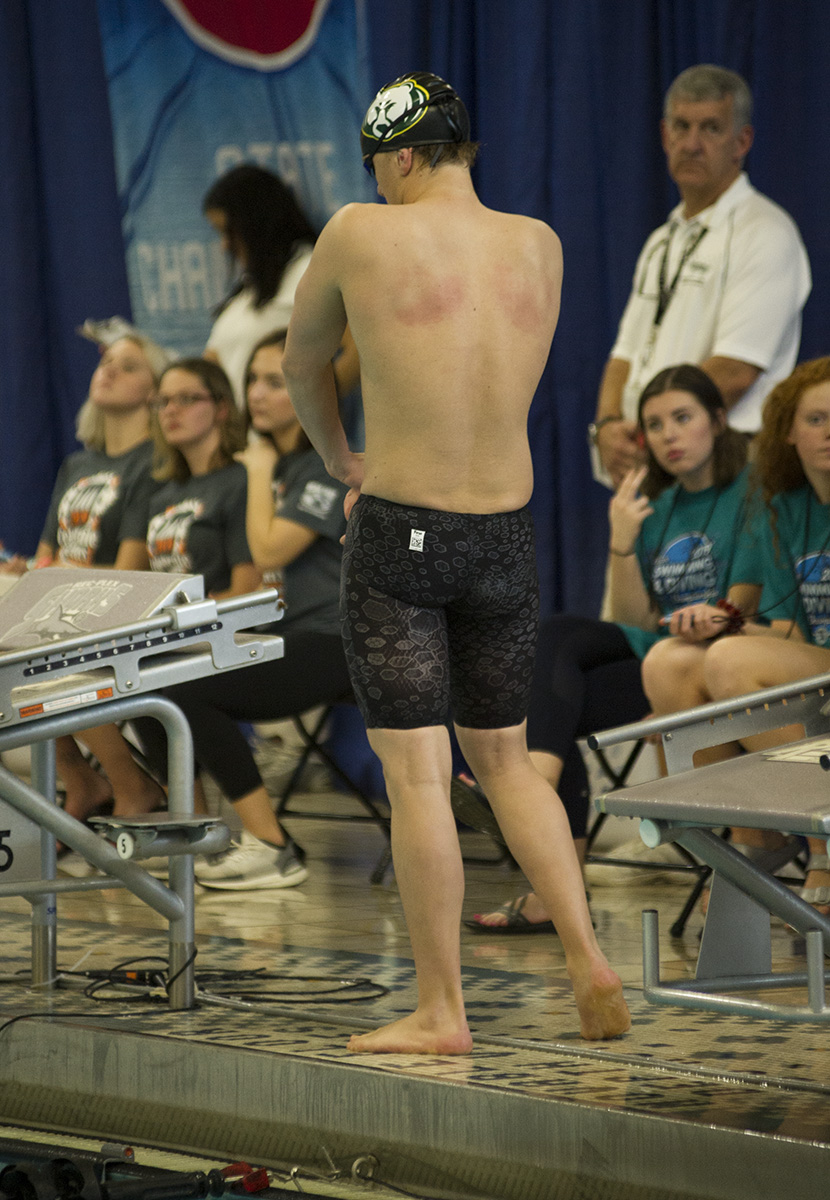 Did You Know?
Swimming and diving is split into two classes; Class 1 is smaller schools, and Class 2 is larger schools.

The Bruins were tense but excited. Their entire season had led up to this meeting, and they were ready to give it their all. The boys’ main goal for the prelims was to go fast enough to place 16th or higher (swimmers who placed first through eighth compete in championship finals and those who placed ninth through 16th competed in the consolation finals).

Prelims began with the 200-yard medley relay, in which the team of sophomore Nick Clervi, seniors Jack Koller and Oakley Lorson and junior Turner DeArmond competed. Clervi started the race with backstroke, Koller followed with breaststroke, Lorson then swam butterfly and DeArmond concluded the race with freestyle. The team achieved a time of 1:39.49 and placed fifth, qualifying the four boys to championship finals the next day.

After the relay, Lorson and DeArmond found themselves in a rough position as they both needed to compete in the 200-yard freestyle immediately after the conclusion of the 200-yard medley relay. With such a quick turnaround, the boys had no time to warm down or warm up for the next race and were practically forced to immediately get back up on the blocks and swim.

Despite poor circumstances, Lorson and DeArmond both qualified for championship finals. Lorson swam a 1:44.36 and placed fourth, and DeArmond swam a 1:45.57 and placed seventh. Sophomore Jackson Veltrop achieved a time of 1:47.77 and placed 15th, qualifying for the consolation finals.

Sophomore Nick Clervi competed in the next event, the 200-yard individual medley. Clervi achieved a time of 1:59.97 and placed ninth, meaning he would be the top seed in the consolation final the next day.

No swimmers from RBHS competed in the fourth race, the 50-yard freestyle, and the fifth event was a 20 minute break. The swimmers took the time to warm down, relax and enjoy each others’ company. The results from the first half of the meet were promising and put the swimmers in high spirits.

Following the 500 freestyle was the 200-yard freestyle relay, in which the team of Clervi, Veltrop, junior Eric Fritschi and freshman Zach Coughenour finished 23rd overall with a time of 1:36.20.

Clervi competed in the next event, the 100-yard backstroke, and placed 15th with a time of 55.85. While Clervi still qualified for consolation finals, he did not do as well as he hoped he would in the race. His feet slipped downwards on the wall his start, so he did not get a strong push off of the wall and he never truly recovered during his race.

“Slipping on my start was frustrating. . . being seeded fifth and dropping down to 15th was tough,” Clervi said. “I was more embarrassed than anything.”

Although the Bruins didn’t fare well in the 100-yard backstroke, they didn’t let this affect their morale going into the 100-yard breastroke, where Koller qualified for the consolation final with an 11th place time of 1:01.99.

Concluding prelims with the 400-yard freestyle relay, the team of DeArmond, Veltrop, Koller and Lorson achieved a time of 3:17.71. This placed them in fourth, qualifying them for championship finals the next day.

“I thought we did a great job during prelims. All of the swimmers made it back to finals in the events they swam,” head coach Taylor Birsa said. “Even though they posted great times in prelims, it was exciting to hear that they already had plans for finals the next day.”

After a night of ice baths and a full breakfast and lunch, the swimmers began finals at 3:00 p.m. on Nov. 16.

Did You Know?
At finals, swimmers score points for their team. First place gets 20 points, second place gets 15 points, all the way to sixteenth place scoring 1 point. Relays are worth double points.

Commencing finals with the 200-yard medley relay, the team of Clervi, Koller, Lorson and DeArmond maintained their position in fifth with a time of 1:39.47 and scored 24 points for RBHS.

Lorson and DeArmond once again had a tight turn around time between the 200-yard medley relay to the 200-yard freestyle, but the awards ceremony ensured that they had enough time to warm up and down between their races.

Following the 200-yard freestyle, Clervi swam a 2:00.48 in the 200-yard individual medley, placing tenth and scoring 7 points for RBHS.

Following the good results from the first third of finals, the Bruins’ positive mentality continued to carry them through the day.

“I felt pretty good during the break, both mentally and in the water,” Veltrop said. “The atmosphere of the team was great, and I thought we had a very positive mindset for having so few people.”

After the break concluded, Lorson achieved a time of 50.67, placing second and scoring 15 points for RBHS. Lorson also broke the previous RBHS record for the 100-yard butterfly, making him the new record holder.

“I felt pretty good during the break, both mentally and in the water. The atmosphere of the team was great, and I thought we had a very positive mindset for having so few people.”

“I really managed to bring it back together at finals and climb back up [the leaderboard],” Clervi said. “I wasn’t nervous, angry or upset going into the race.”

Following the backstroke, Koller achieved a time of 1:01.91 in the 100-yard breaststroke, placing eleventh and scoring 6 points for RBHS.

Competing in the 400-yard freestyle relay was the team of DeArmond, Veltrop, Koller, and Lorson. The Bruins finished fourth with a time of 3:15.12, scoring 26 points for RBHS.

As a whole, coach Birsa considered the meet to be a huge success. Despite having only seven swimmers when other schools had upwards of 15-20, RBHS managed to rank fifth overall.

“On Friday night, I kept thinking everything over and how they seemed so tired after their races, but then getting to warm ups on Saturday and hearing how great they were feeling lifted me up,” Birsa said. “I thought, ‘Okay, we’ve got this.’ Especially after the 200 freestyles, I was way more excited than I was nervous. Overall, everyone had really high spirits and was so excited for and proud of each other. I was very proud of the team.”

What do you think are key components to success at a high athletic level? Let us know in the comments below.

Dinner and a Murder: Episode 2 “Fight or Flight”