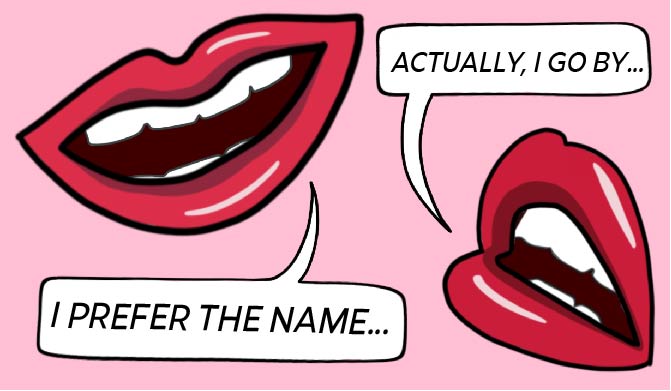 When people come across senior Yousef Binalsheikh’s (pronounced bin-al-shake) name, it can appear as an impossible tongue-twister. In Binalsheikh’s eyes, cases of other people butchering his name represent a linguistic and cultural bridge that spans from his home country of Saudi Arabia to the United States.

His first name, Yousef, is a common one in his culture, and his last name comes from the word ‘Sheikh,’ which is an honorable title held by a leader in the Muslim community. In a literal translation, his last name translates to ‘son of the Sheikh.’

“I used to care how people pronounced my name, but over the years I’ve become used to people pronouncing it wrong,” Binalsheikh said. “Since I’m not offended, I just go with whatever they said [because] it just makes it easier.”

Although Binalsheikh grew up in the United States, the pronunciation of his last name still brought about stiff interactions starting in elementary school.

“I used to care how people pronounced my name, but over the years I’ve become used to people pronouncing it wrong. Since I’m not offended, I just go with whatever they said [because] it just makes it easier.”

“It didn’t take long for teachers to pronounce my first name, as they realize it sounds exactly how it’s spelled,” Binalsheikh said. “My last name, though, definitely took a bit of practice. The first call of attendance for the year is the hardest when you see the teacher take the long pause as they try to pronounce it. It’s just a name that’s not common [in the United States] whatsoever and understandable that [a teacher] wouldn’t get it on their first try.”

In one instance Binalsheikh had a physical education teacher who took an attempt at pronouncing his last name, only to give up and call him ‘Bangladesh,’ as in the country, for the rest of the year. Binalsheikh and his friends in the class found it “hilarious.”

Sophomore Alishah Choudhry (pronounced uh-leesh-uh chow-dery) relates to Binalsheikh’s way of dealing with mispronunciations of her name. Choudhry, whose last name is common in her parents’ home country of Pakistan, said she often laughs off cases where people butcher her name.

“One incident I remember was when I started going to this tutor, and at the end when my mom asked her how it went she said, ‘Alishah and I got to know each other quite well,” but she mispronounced my name and said ‘uh-lish-uh,’” Choudhry said. “My sister, Anushah, and I both think it’s funny when people do that because we have never thought it to be rude when people mispronounce it.”

Choudhry said she will usually correct someone who mispronounces her name because she doesn’t want to be called by his or her incorrect pronunciation of her name.

Names hold ancestral and historical significance for many minority groups in America, according to an article by neaToday, including foreign immigrants and refugees. Names have complex stories, and when students are often forced to adapt to an “Americanized context,” their stories and identities are stripped when these people are forced to take on names that are not their own.

In an extreme case, the company Nike lost $14 billion in potential financial profit because of a mispronunciation of a name according to an article by inc.com. In an endorsement meeting with National Basketball Association (NBA) superstar Stephen (pronounced ‘steff-in’) Curry, the Nike spokesperson mispronounced Curry’s first name (pronouncing it as ‘steff-on’). Insulted by this, Curry chose to partner with the company Under Armour instead. Over the past few years, thanks to Curry’s meteoric rise to superstardom and success, Under Armour’s revenue skyrocketed largely in part to Curry’s popularity. This all showed how mispronouncing a name led to a devastating missed opportunity.

Unlike Nike, English-language learner (ELL) teachers Lilia Ben Ayed and Jennifer Turek said they immediately try to approach students and learn the exact pronunciation of their names. Ben Ayed, who has been teaching at RBHS for 12 years, and Turek, who has taught for at RBHS for three years, agreed it is vital to be aware of the multicultural environment at school, since many of the ELL students they teach are immigrants, refugees or people who have had to move because of their parents’ jobs.

“I think both of our classes have pretty diverse levels of students in the class so we just let the students talk,” Turek said. “We try to get them to talk as much as possible. They’re [all] really the same as any other student. They have interests, want to be good at [different] things, make friends and have someone to eat lunch with. So we just try to interact with them… and try to get them talking and [feeling] comfortable in their classes.”

Being a person with a foreign name herself, Ben Ayed said she understands how some of the incoming ELL students feel when they first arrive. Through this mutual feeling, she tries to establish a welcoming environment for the students starting with the correct pronunciation of their names.

Binalsheikh said the most awkward time of the year when it comes to pronouncing his name is always around graduation or award ceremonies when administrators attempt to pronounce each student’s full name. When the administrators reach his name on the list of students, the pronunciation almost always goes wrong.

“In the sixth grade, I was the first person called for my certificate of graduation, and they pronounced my name ‘Yousef Benalsheeka’,” Binalsheikh said. “In future years some of the administrators would approach me to get the exact pronunciation of my name for graduation, and I appreciated it.”

Binalsheikh said students who have their names mispronounced by peers, teachers and other adults shouldn’t take the mispronunciations as intentional, demeaning or personal.

“The best way to deal with the awkwardness is to place yourself in the teacher’s shoes and realize that they have never seen a name as exotic or hard to pronounce,” Binalsheikh said. “For some [of my] teachers that did get it wrong, they would take an attempt every day until they [got] it right. . .  [I’d] just [try] helping them out in pronouncing it a couple of times until they [got] it.”

Whenever Ben-Ayed and Turek come across a new student, they ensure that they learn how to pronounce the student’s name correctly no matter how long it takes.

What is the most awkward experience you’ve had with having your name mispronounced? Let us know in the comments below.

I think addressing this topic is super interesting and unique, I’m sure a lot of people understand and have gone through the same mispronunciation

This article is really intriguing to read and was eye opening considering I have a very common name I never really knew what it was like to have a teacher or substitute to mispronounce my name.