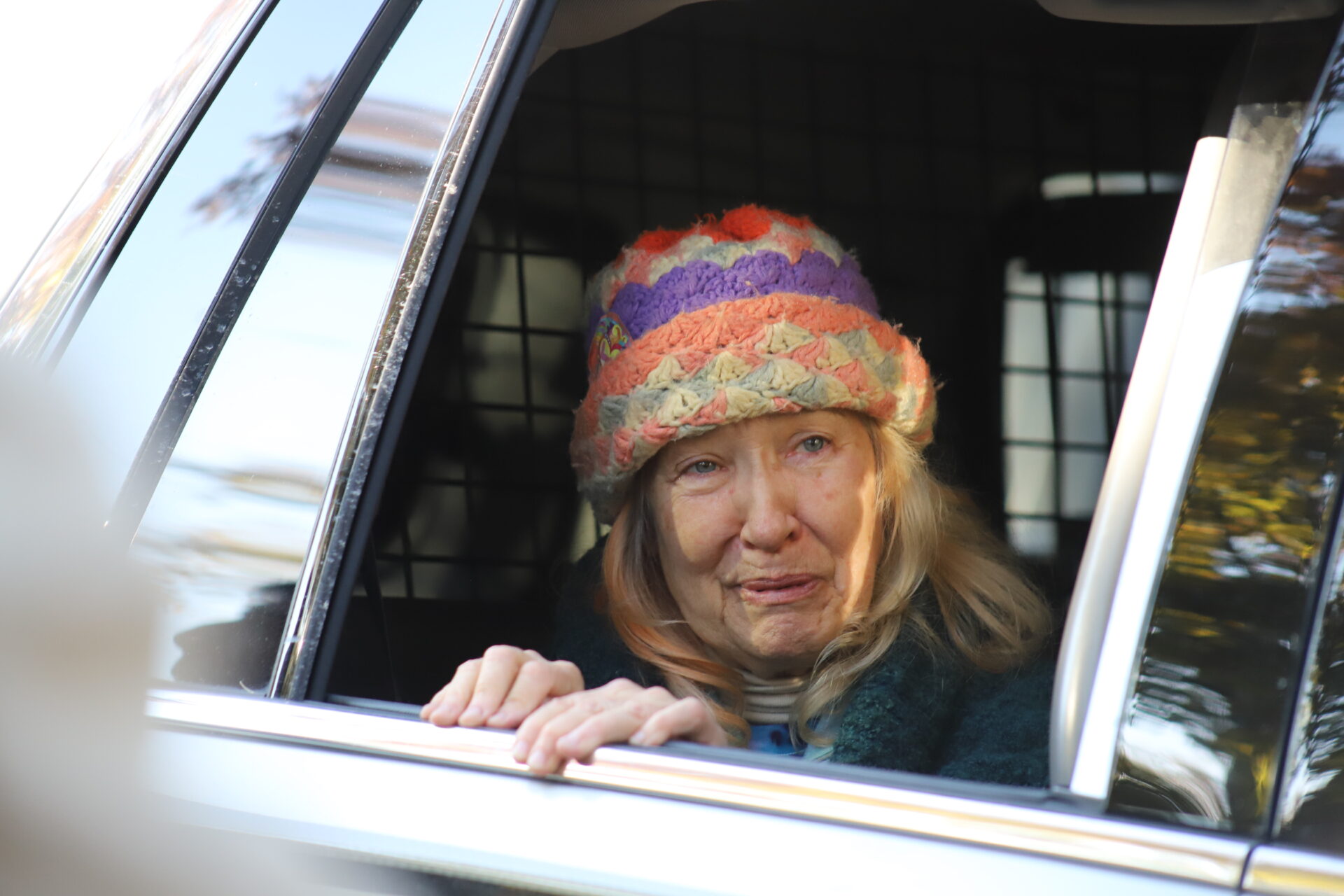 Sixty-seven-year-old Sutu Forte ascended a single tree in the midst of a forest at the Bluff Dale Drive cul-de-sac on Oct. 28. She stayed in protest of a new concrete trail the city plans to build through her organization’s—It’s Our Wild Nature—wildlife habitat.

The trail project will provide a link in the north-south section of the 30-mile trail loop around Columbia, according to the Columbia Public Works Department. The budget for the project is $1.83 million. She camped for eight days and seven nights in a tree she named Purity Brother, a 60-year-old northern red oak.

Forte’s makeshift treehouse balanced on the limbs of the aging tree 20 feet in the air. She persisted through each day in a fragile tent hanging over the wilderness, never coming down the tree. Within the tent, Forte relied on the warmth of blankets and sleeping bags to endure the fluctuant Missouri weather. A brilliant blue tarp was draped above the entire structure in order to keep rain and snow from clinging to her shelter.

“[The weather] was supposed to be even worse, and many people were telling me to come down a few nights ago because it was going to be a terrible snow,” Forte said. “I just said no; I signed on for whatever. I’m staying up here.”

Co-founder of the organization It’s Our Wild Nature, Forte joined other local residents in a mission to preserve “35 acres in the heart of Columbia, Missouri” since 2008, according to the association’s website. Her friend and neighbor, Michelle Johnstone said It’s Our Wild Nature’s vision is to keep the habitat “in its natural state, clear out the invasive plants and make it into a natural school to where people can come out and learn about nature firsthand, hands-on.” Forte lives in the Bluffdale neighborhood and said she uses the land for a Wilderness Sanctuary and Natural School, an area the city voted to remove in favor of a 10-foot-wide concrete trail starting at the east end of Rollins St., crossing Hinkson Creek and connecting at the Bluff Dale Drive cul-de-sac, according to the Columbia Public Works Department.

The city obtained rights to the land after an eminent domain lawsuit in March, according to the Columbia Missourian. Forte said she has been fighting the city on the subject since 2007. Chief Strategy Officer at PedNet Coalition, a nonprofit organization that focuses on transportation equity, Lawrence Simonson, said towns should be built to serve people who can get about their daily lives by whatever mode of transportation they prefer.

“[The new trail] provides a direct access, not only a north-south access but an east-west access, that is a lot more user friendly to vulnerable populations. It removes, depending on which direction you’re coming from and going to, excessive hills that are next to high moving traffic,” Simonson said. “A family in the Shepherd neighborhood would never ride with their eight-year-old to something on campus or something downtown, along stadium, nobody would ever do that. But, this would now allow those families ways to say ‘Hey, maybe instead of driving today, wouldn’t it be a lot more fun and a much more memorable experience if we rode our bikes from our homes?’ over to campus or downtown or wherever they’re going.”

The city planned to start construction on Monday but was unable to get much accomplished because of Forte’s protest. Wednesday, though, the contractor began building an access roadway to the bridge sight, according to the project’s homepage.

“The thing about trails are they are the most user-friendly form of infrastructure for vulnerable users. So, people in wheelchairs, people that may be sight-impaired, people that are walking, people that are riding bikes, that can be anybody that’s an eight-year-old trying to get to school all the way up to an 80-year-old who just needs to exercise or wants to walk over to the corner store,” Simonson said. “So that’s why we think trails are so important because it’s much safer and much more pleasant than one of those vulnerable road users having to be next to large automobiles moving at high rates of speed.”

To protest the trail was important, Marlene Stevens-Hanson, a friend of Forte, said. She believes 30-40 people came to visit Forte each day she was in the tree. Visitors decorated the area with signs in support of her cause, some of which said, “She speaks for the trees,” and “Eminent domain misuse,” and left food for Forte. Stevens-Hanson joined Forte’s mass of supporters when she saw a Facebook Live video of Forte in the tree.

“I get so tired of people approaching a situation with ‘There’s nothing I can do about this.’ There is something that you can do. . . It’s very inspiring when people decide to say ‘no, I don’t agree with that and I’m going to do this and we’ll see,’” Stevens-Hanson said. “And miracles do happen everyday and that’s what I told her [Forte] yesterday. It could happen. Who knows?”

On Nov. 2, Stevens-Hanson brought a notebook to the base of Forte’s tree where people could write messages and leave notes.

“[The area] is open to access for people to come back and hike and enjoy and appreciate. I just think before anybody makes a decision about how they feel about what’s happening here they really have to come out, bring their boots and walk it and see what’s at stake,” Stevens-Hanson said. “We’re continuing to drive out our wildlife and giving them less and less room, and I feel like it’s got to stop somewhere. It’s very counterintuitive to destroy nature so that people can enjoy nature. It doesn’t make any sense to me. People need to put their boots on and come out.”

“I get so tired of people approaching a situation with ‘There’s nothing I can do about this.’ There is something that you can do. . . It’s very inspiring when people decide to say ‘no, I don’t agree with that and I’m going to do this and we’ll see. And miracles do happen everyday.”

It’s Our Wild Nature named 37 trees in the area, many of them, they said, exceeding 100 years. Signs hang from each named tree with a worn piece of rope and a handwritten label scribbled across a sheet of paper.

The wildlife holds significant meaning not only to Forte, but her friends, as well. Pat Holt, a documentarian and friend of Forte, found herself at the base of the tree throughout Forte’s protest. Holt said she would often play in the trees growing up.

“The first time I came over and really did a video and walked in the woods was when I was waiting to hear about a breast biopsy,” Holt said. “While I was waiting to get the results from the biopsy, I was over here with [Forte] and I did a short video and it was just nice because all the time I was worried and obsessed about my breast. But, when I was down there in the woods and I was taking pictures of the trees and the grass and the birds and things, it cleared my mind. So, it’s been a special place for me because of that. . . I think when you’re old, it makes you feel young again.”

Forte derives her passion in nature and her friends in the trees. She said the trees are “more like humans than we even thought of.” That their rings resemble the human thumbprint, that their lungs are in the form of roots. She said that if a sidewalk is placed next to a tree, their roots will suffocate.

“I support her living out a path that is true to her authentic integrity. This is who she is. This is civil disobedience,” Johnstone said. “Bottom line, I support her being who she is. I think if more of us did that we’d have a lot better world. We wouldn’t have all of this conflict.”

Johnstone said there are better options for the trail than tearing down the wilderness in order to make a connection to campus. For her, the project brings safety concerns to a quiet neighborhood.

“We have narrow streets; there’s parking on both sides of the road; there are no sidewalks; there are blind curves; we have 47 plus driveways, it is a school bus route, it is a non thorough fair at this time,” Johnstone said. “Because of the nature of these streets, one of my biggest concerns as a homeowner in this neighborhood is that people are going to have to be weaving in and out of parked cars, and there’s a lot of areas that not even two-way traffic can go through.”

On Monday, the Columbia Police Department gave Forte until Friday to come down from the tree. After being removed by the fire department, Forte received a citation and was released from jail.

“I think it’s very admirable that she believes in a cause, and it’s a cause that, really, who can’t get behind. Unfortunately, I think that she has not looked at the bigger picture. The community has really supported this trail. All pieces of due process have gone through not only once but multiple times in a very public fashion,” Simonson said. “So, I think that there’s a little bit of a ‘I can really appreciate this’ but blind bias by her and some others in the organization because they love the area so much.”

Stevens-Hanson said her most peaceful moments are when she’s by herself outside. Forte’s tree sit called attention to the significance of nature in the Columbia community, but also shed light on those who supported connectivity through trails in the city.

“[Walking in the wild offers] sanity. Our world’s going crazy. We’re killing each other. We’re literally killing each other. A forest will take out your internal extortion and static electricity that you build up all day in front of screens, on carpets. It’s called forest bathing, where you go in the forest, and it heals you,” Forte said. “Experience it. Come out here two or three times. I want you to invite your friends to come walk in the Columbia Wilderness Sanctuary and Natural School, see how you feel after 30 minutes.”

What do you think of Sutu Forte’s tree sit? Let us know in the comments below.

Senior Maddie Orr is the Features Editor for The Rock and Bearing News. She is a member of the Girls’...
View all posts

Really nice job covering this! I enjoyed the photos and other elements too!

The depth and just the topic of the story make it very special, I appreciate this story being written