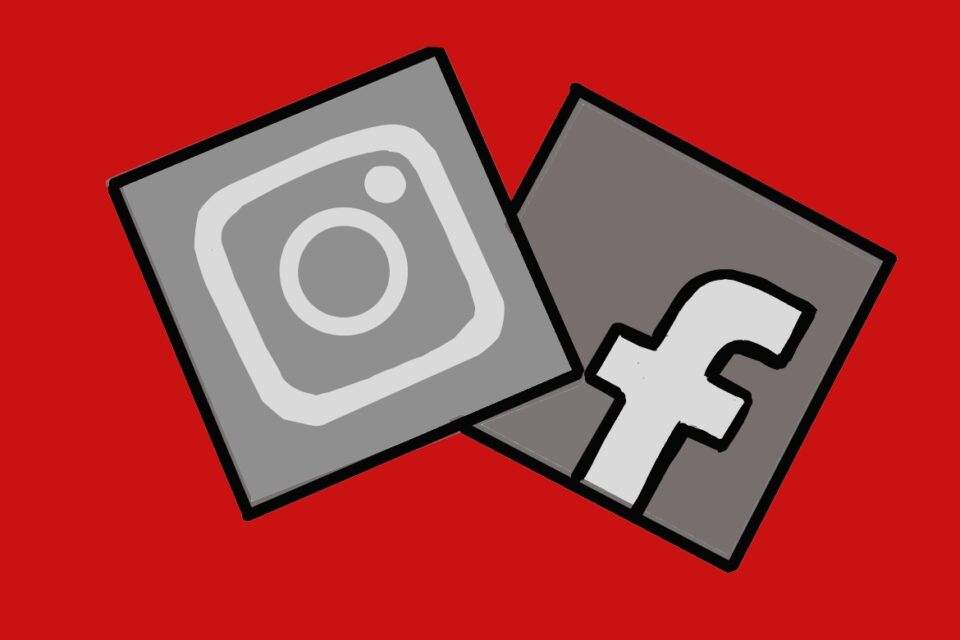 When junior Avory Gilbert was 10, she received her scoliosis diagnosis. She had to wear a back brace in sixth grade, and when that did not work, she underwent surgery. Her condition worsened when she returned to gymnastics, requiring her to go through another procedure June of this year.

During Gilbert’s sophomore year, she said there was an anonymous Instagram page called “Rock Bridge Confessions,” which she said had more than 500 followers. In the bio section, the owner wrote anyone could send in information about other people, and he or she would publish it to the account. While Gilbert said nine out of 10 times the account would use a person’s initials rather than a full name, when a post came out in May of last year about her, it included her full name. Her friend took a screen shot of the post to show her.

“It said, ‘Avory has scoliosis because she messes around with a lot of guys,’” Gilbert said. “It made me feel bad ’cause I’ve never actually had a boyfriend before. I never really hang out with guys a lot, and so to think that people would think that about me kind of hurt my feelings.”

Instagram’s community guidelines include intellectual property rights and copyright infringement, appropriateness of content, preventing spam, following the law, respecting other users, avoiding graphic content and not glorifying self-injury. After seeing the post, Gilbert reported it, but Instagram did not take it down. She then tried to convince the account owner to remove the confession.

“It said, ‘Avory has scoliosis because she messes around with a lot of guys.’”

“I messaged them to take it down,” Gilbert said, “and they said, ‘Sorry, I can’t do that. It wasn’t your confession that you sent in. Even though it’s about you, I can’t take it down.’”

Dr. Christopher T. Conner, Visiting Assistant Professor of Sociology at the University of Missouri—Columbia, focuses his research on sociological theory, which includes statements about the relationship between the social world and certain facts, as well as an array of other topics. He said what drives one person or a group of people to shame or target another depends on the context and may differ among adolescents and adults.

“In countless studies of online behavior, we have seen that individuals often behave in more negative ways and state [their] opinions more openly than we would in person,” Professor Conner said. “The result is a kind of no consequences mentality towards what we say.”

When senior Allie Bruns was in seventh grade, she, too, became the target of online harassment. She and her best friend lived across the street from each other and did everything together. Bruns said her friend texted her one day about a public Instagram page called “Okay, cool.” When Bruns looked at the page, there was a post saying her friend had a crush on another person. After her friend accused her of creating the page to spread personal information, Bruns said she was in shock, confused how her friend could think that about her.

“We lost a lot of trust. I never knew if she was telling the truth about the Instagram,” Bruns said. “I didn’t know if she had started it to make me look like a bad friend, and I know she thought that I was lying about [it]. She thought I started the page, and she thought I was lying, that it was actually me.”

Bruns said the conflict was isolated between her and her friend at first. When the account owner began posting about students outside of Bruns’ friend group, other people found out about the page. Content ranged from calling people out for cheating on tests to shaming a person if he or she “looked ugly today.” Until posts moved away from her and her friend, however, Bruns said her peers judged her and thought she created the account; some stopped talking to her for a while.

“They were like, ‘Oh, I didn’t know she was that kind of person. I guess she must be a fake friend that she would do this to someone else,’” Bruns said. “But mostly people were just really surprised because they know that I’m not the type of person that would do something like that.”

“We lost a lot of trust. I never knew if she was telling the truth about the Instagram. I didn’t know if she had started it to make me look like a bad friend, and I know she thought that I was lying about [it]. She thought I started the page, and she thought I was lying, that it was actually me.”

Since she was in middle school at the time, Bruns said the experience was difficult, especially because of the pressure she felt to have friends, be popular and care about others’ opinions. In the American Psychological Association’s bi-weekly podcast, “Speaking of Psychology,” clinical child and adolescent psychologist Dr. Mitch Prinstein spoke of evolutionary theory explaining that children entering their teenage years become concerned with social status. Dr. Prinstein said the brain’s release of oxytocin and dopamine makes social bonding with peers a source of pleasure and reward. Professor Conner said there are countless ways shame, embarrassment and humiliation affect a person’s psychological, social and emotional development, the most stark of which regard long-term health consequences, mental illness and shorter life spans.

“One of the most interesting theories within sociology is labeling theory. Labeling theory states that we may conform to the labels which others give us. Imagine a child who is told they will never amount to anything; they may internalize that and begin to believe it,” Professor Conner said. “As adults, this process can also happen, and we may react back against it in bouts of rage. Moreover, we also may turn away from those who give us negative attention and seek out those who will praise us.”

The National Center for Education Statistics and Bureau of Justice’s 2017 School Crime Supplement indicated about 20 percent of students between the ages of 12 and 18 experienced bullying nationwide. Unlike drama, which includes “the everyday difficulties that all teenagers experience,” bullying comes from a “repeated pattern of harmful or rejecting behavior” for an extended period of time, according to an article from “HuffPost,” a news website. Bullying comes in two modes, direct and indirect, with four broader types of categorization: physical, verbal, relational and damage to property. “When bullying is also harassment, it does break federal law,” according to stopbullying.gov. Dr. Prinstein said research shows a strong positive correlation between one’s likeability and his or her success later in life, which can affect one’s happiness, financial stability, health and relationships.

After Gilbert’s attempts to have the post removed failed, she turned to her mother for advice. Her mother told her to “take it lightly,” and Gilbert did her best to not let the post affect her. Most people who saw the post thought it was a joke, Gilbert said, and those who commented stood up for her by calling out the post’s inaccurate understanding of scoliosis.

“I thought it was kind of funny. I didn’t really think much about it because they had gotten the account reported and taken down within that week, so I didn’t think it was that big of a deal,” Gilbert said. “But it did [make] me feel like people did judge me because of my back and they had assumptions I had scoliosis because of another reason, and that’s been kind of difficult.”

Gilbert said she found the post humorous because of its wording and because the person who sent it in did not “know how scoliosis works,” a topic Gilbert is well-versed in. Gilbert said she now watches out for accounts targeting others. Whenever she sees a “Rock Bridge Confessions” page online, she tries to get her friends to report it and takes the content to School Resource Officer Keisha Edwards. All cases of bullying or cyberbullying go through Columbia Public Schools, Edwards said, and the process starts at an administrative level.

“Labeling theory states that we may conform to the labels which others give us. Imagine a child who is told they will never amount to anything; they may internalize that and begin to believe that.”

Dr. Christopher Conner, Visiting Assistant Professor of Sociology at the University of Missouri—Columbia

Even though Gilbert now utilizes school officials to help handle situations of social media misuse, at the time the post first came out she did not think they “had a way of finding out who was running the page,” so she chose not to say anything.

“I just didn’t want [the account owner] to post more about people because—although I thought mine was kind of funny ‘cause of the way that they worded it, like everybody knew it was fake—but there were other posts on there about people, about stuff that people had done in the past or exposing people for mistakes that they had made in the past,” Gilbert said. “And some of my other friends had been on that page, and they were really upset about it.”

With the country’s origin rooted securely in protest, Professor Conner said he thinks cancel culture, a form of boycotting someone if he or she has a questionable opinion or problematic behavior, is a symptom of a much larger issue in American society. He said the American public has a tendency to avoid “difficult, uncomfortable or complex” issues.

“Social media, because of its focus on individualism, is in fact a very American thing and exemplifies our focus on the individual instead of the collective. Because of these two trends, social media tends to orient us towards negative interactions over positive ones,” Professor Conner said. “The other variable that aids in this is the speed of communication. More than a decade of sociology has taught me that the social is a very fragile thing, and when we speed up the communication process it exposes that fragility.”

Professor Conner said America also has an insular culture where citizens have a tendency to blame others for their successes and failures. He said sociology looks at how “the system” is structured to promote success and failure and how that system affects various groups differently. Professor Conner said people identify success with “positive personality aspects” and failure with “the consequences of bad decisions.” For him, social media is merely another expression of such culturally embedded tendencies and views.

“I think that [my] experience made me a lot stronger just because I stopped caring a lot about, ‘This person didn’t like me,’ or ‘This person thought I was the person’ or something,” Bruns said. “So it was definitely hard, but you kind of realize who your true friends are. And it kind of made me not worry as much about what other people thought of me because my close friends knew who I was, and that’s all I really needed.”

What influence has social media had on your mental health and self-esteem? Let us know in the comments below.