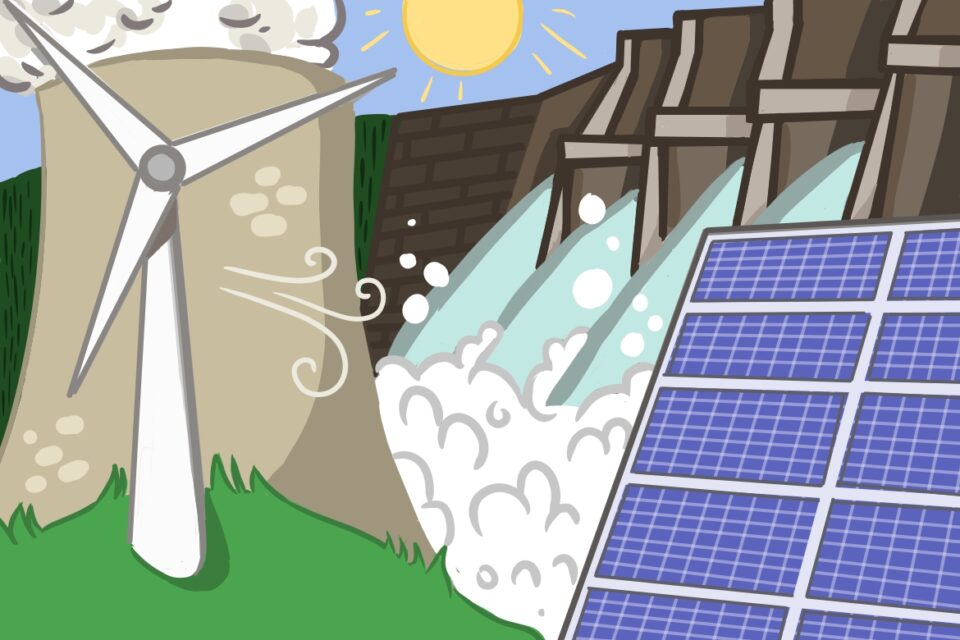 A 92 by 92 mile grid of solar polarvotaic panels could power the U.S.’s electricity needs, according to a 2012 study for the book Terra Nova by Eric Sanderson. Solar power, energy from the sun converted to electricity, is one type of renewable energy, a power source that can replenish without human assistance.

Other examples of renewable energy include wind power through turbines, hydroelectric power from building dams and nuclear power produced by splitting uranium atoms in a reactor. Renewable energy provides a way to harness nature’s resources and use them without the corollary of carbon emissions found in fossil fuels.

Senior Kellan Clowe, an avid renewable energy enthusiast, favors hydroelectric power over other renewable energy sources. He said the benefit of lessened emissions from water-based energy adds to its appeal.

“I like the idea of hydroelectric power, and I think it’s good for when dams are needed,” Clowe said. “It provides power relatively easily without any maintenance or harmful byproducts.”

While Clowe approves of hydroelectric power, he said he is aware there are still flaws. The major disadvantage of hydroelectric energy is the environmental harm building dams can bring, such as disrupting river flow patterns and the natural ecosystems of bodies of water. Clowe also said there are pros and cons of other forms of clean energy, such as solar and wind. While both reduce the release of carbon dioxide into the air, solar panels and wind turbines can be expensive to implement, Clowe said, adding that the turbines take up space as well.

Dr. Damon Hall, an assistant professor for the School of Natural Resources at the University of Missouri—Columbia, compared the technology to support solar and wind energy through research for his field. He said the tools developed to generate wind and solar power helped them become more popular and reliable. Dr. Hall said wind turbines have advanced so they are near cities for optimal usage. Missouri’s neighboring state, Kansas, is the fourth highest electricity generator in the U.S. and places wind turbines about 20 miles away from the cities such as Ellsworth and Lincoln Center. In terms of solar power, its manufacturing emits zero greenhouse gases, types of gas such as carbon dioxide that are trapped in the Earth’s atmosphere, and the panels are easily installable. The actual generation of energy, however, is limited to hours of daylight and to clear, sunny skies, which are not always guaranteed.

“[Solar and wind power] face what we call intermittency,” Dr. Hall said. “When the wind is not blowing, you’re not generating power, just like when the sun is not shining, the light the solar panels absorb becomes choppy.”

Intermittency, on the one hand, is when a fuel source experiences sporadic occurrence in the power’s flow pattern, also known as the non-dispatchable movement of energy . Dispatchable generation, on the other hand, is when energy is accessible at any time and the power is controlled.

Solar, wind and wave power—the harnessing of energy from tidal movement—are all forms of intermittent power. A downside to wind turbines is a constant humming noise that may be of annoyance to the people in surrounding housing areas. Dr. Hall, however, said the toxic fumes and ash particles from burnt coal is far more dangerous compared to the irritable noise from the turbines.

“When you compare the aesthetic negatives of the wind turbines, you have to compare them in the same breath with fossil fuel plant generation of natural gas and coal fire plants,” Dr. Hall said. “And also the knowledge that those fossil fuel plants are the largest sector that’s contributing to global climate change.”

In the beginning of the 1900s, there was a push toward renewable resources after the realization that fossil fuels are non-renewable. When the amount of fossil fuels in the Earth’s crust are used up, there is no way to reproduce them, while solar and wind power can be restored with the movement of the sun and by the wind. In the early 1950s, scientists observed the growth of global warming and attributed it to “the greenhouse effect,” which is the process that occurs when trapped gases fill the Earth’s atmosphere and in turn increase the overall temperature of the planet. Global warming contributes to climate change, which impact environments such as oceans, forests and urban areas.

Along with solar and wind energy, nuclear power is an option for renewable energy and has zero carbon emissions, but it also can be dangerous if not stored properly. Malcom Smith, a former nuclear engineer at the University of Columbia—Missouri and a current RBHS physics teacher, said he believes nuclear energy is the only solution to climate change for this reason, but from research on nuclear disasters such as Three Mile Island, Chernobyl and Fukushima Daiichi, he said he knows there can be potentially dangerous accidents.

The first strike against nuclear manufacturing came from Three Mile Island, a land mass near Pennsylvania. It held several nuclear reactors but the entire power plant closed down after one of them suffered from an accidental, yet fatal meltdown in 1979. This destruction released radioactive gases that were harmful to locals and people in the area, resulting in a mass evacuation of the island. Chernobyl, the second strike, was, and still is, known as the worst disaster in nuclear energy’s history.

If you walk up to an area with lots of radioactivity, and you walk away, you’re basically dead. That’s the main problem with nuclear energy: the radioactivity remains.”

This accident in Russia in 1986 resulted from a poorly designed nuclear reactor being misused by untrained personnel and led to massive fires consisting of radioactive energy. The third strike against the development of nuclear energy was the Fukushima Daiichi accident. Occuring in Japan in 2011, this event came after the Great East Japan Earthquake when extreme flooding disabled the power, which led to the inability to cool the reactors and the meltdown of the nuclear cores. These catastrophes were examples of the potential volatility of nuclear power, Smith said, and other possible consequences, such as toxicity to wildlife and radioactivity, are holding back the future of the nuclear industry.

“If you walk up to an area with lots of radioactivity, and you walk away, you’re basically dead,” Smith said. “That’s the main problem with nuclear energy: the radioactivity remains.”

Dr. Hall said these nuclear disasters did not dissuade manufacturing; rather, they forced governments to put more regulations on where nuclear power can be produced and tighten protocol to prevent a nuclear meltdown. Nuclear energy also faces the cost barrier, much like other renewable resources. Designing and building power plants not only require time, but also many expensive resources, Dr. Hall said. Another issue nuclear engineers deal with is how to store the power.

“[Nuclear waste] is going to be around forever,” Dr. Hall said. “And so you have to design facilities that can handle that waste for thousands of years.”

Currently, spent radioactive fuel is stored in a pool of water where it cools in order to lose its radioactivity, but this storage area is limited. Scientists are also looking at stocking nuclear fuel in deep, underground rock formations, when they run out of space. While nuclear is a valuable resource, Dr. Hall said it’s potential in the near future is indiscernible because of the backlash it faces from the public, the high cost and the large amount of time it takes to build power plants, nearly 20 years. The legal regulations regarding protections for the environment and general welfare will determine the continuity of clean fuel.

“If everything stays the way it is now, meaning that [the] market is the primary driver of what we do with our electricity generation, then I think that other renewable energies will really outpace nuclear,” Dr. Hall said. “But the way all renewable energy is going to move and change the fastest is with policy changes within our society.”

How do you think renewable energy will influence society in the future? Let us know in the comments below.