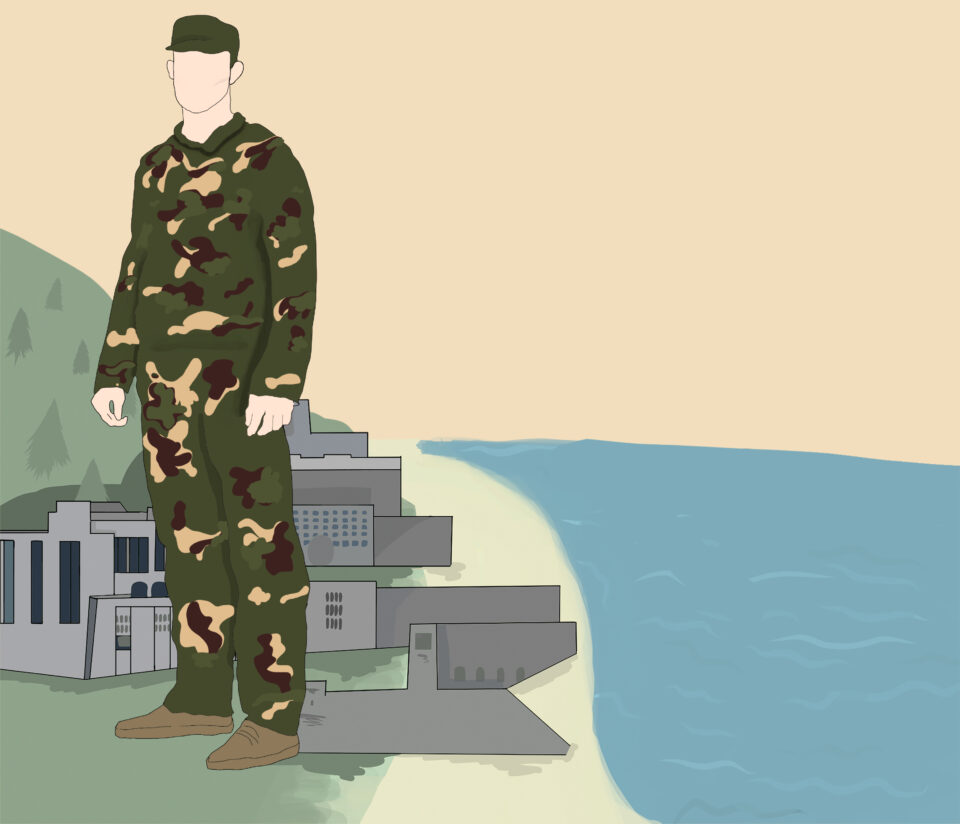 On June 29, senior Camryn Crowe woke up just before the sun broke the horizon, which is much earlier than most teenagers do during the summer. The Military Entrance Processing Station (MEPS) required her to be at its location around 5:45 a.m., she said, which is why the early wake up call was essential. She rolled out of bed, laced up her shoes, grabbed her bag and was out the door and on her way to a life changing, yet equally nerve-racking, experience: joining the National Guard.

Although Crowe’s recruiter tried to prepare her for the days ahead, Crowe was still unable to sleep the night before MEPS because of her nerves. The exhaustion wasn’t helpful for the next morning, either, since she had to be up at 4:30 to undergo physical exams.

“I have always wanted to be a part of something greater than myself. . .”

MEPS is the second step in the process of military enlistment. At one’s nearest facility, in either KC or STL, military and civilian professionals “determine applicants’ physical qualifications, aptitude and moral standards as set by each branch of military service,” according to Military.com, a website that provides news and information about benefits to military members, veterans and their families.

“The process begins with you [finding a] recruiter, and then you go to MEPS. That’s where they check your body out and mentally make sure that you are eligible for military,” Crowe said. “You also take the ASVAB [Armed Services Vocational Aptitude Battery] there. It’s like an ACT that shows what jobs you are eligible for. That test took me three hours.”

After going through an application process, recruiters are hand-selected for their positions. Their job is to attract and select people for military training and employment. Some of this recruiting takes place in high schools when representatives visit these institutions. Currently, there are approximately 9,500 soldier and civilian recruiters working out of more than 1,400 recruiting stations across America and overseas, according to the U.S. Army Recruiting Command. Sgt. Bryan Johnson, a Missouri Army National Guard recruiter, went through an extensive process of interviews and exams in order to enter into his position.

“The first step [to enlisting] is talking to me about opportunities and the initial steps for service,” Sgt. Johnson said. “After that, it’s developing your career.”

Then, one goes to MEPS: a long, arduous experience which usually lasts two days and requires one to stay overnight, according to by The Balance Careers. For Crowe, her time at MEPS hit a couple of bumps when she accidentally revealed that she was on antibiotics because of strep throat, which made the process extra time consuming.

“You cannot be on any medication entering the military. So, even though I passed all of my physical and mental exams, I had to wait to prove I wasn’t on any medication before I could swear in,” Crowe said. “MEPS is the most boring place you can ever go. . . You get there at 6 a.m., and you’re leaving around 2 or 3 p.m., and you just sit there all day. It’s terrible. So, the fact [that] I had to go back twice was so annoying only because I was on antibiotics for strep throat.”

Despite the twists and turns, on July 3, Crowe swore in to the Missouri Army National Guard. From there, she chose to be a combat medic, or a 68W in military terms.

To “swear in,” one must pass the ASVAB, a multiple-choice test that helps identify which Army jobs fit the particular individual, according to GoArmy, a website detailing the recruiting process and other information. One will need to score at least a 31 on the exam to be considered for enlistment in the Army. Then, if one passes the ASVAB, they endure physical examinations to ensure they are in good health to handle the challenges of basic training and military service. Finally, after passing all required testing, the recruit can swear in to military service.

This summer, Crowe joined the 33.4 million Americans ages 17 to 24 in the Army, according to the U.S. Army Recruiting Command, and is only one of the many RBHS students also interested in the same career path, she said.

Senior Will Vradenburg has committed to a similar future in the military, but he found his calling in the United States Marine Corps.

“After high school, I’m shipping off to boot camp on the 29th of June, 2020. From there I’ll undergo boot camp and eventually enter my job, Helicopter Crew Chief, which is a five year contract,” Vradenburg said. “After those five years I plan on going to college for forestry.”

He also went to MEPS this past summer in order to swear in but hasn’t finished the process. Vradenburg said he is “very excited” about the future ahead of him as well as the “great honor” of becoming a U.S. Marine.

“I decided to join after high school because I think that serving your country is important and that it’s a good way to better yourself,” Vradenburg said. “Plus I didn’t want more school immediately.”

“Students [who swear in to the National Guard] gain 100 percent tuition payment to colleges and technical schools in the state of Missouri. They also gain leadership skills and future employment opportunities.”

Since she was in eighth grade, sophomore Alisha Choudhry has aspired to attend a military academy, her top choice being West Point.

“I have always wanted to be a part of something greater than myself and help people,” Choudhry said, “and I feel that going to one of [these] academies and being in the military is the best way for me to do that.”

Choudhry said this process is a little different than applying directly to the different military branches.

For the academies, “You have to get a congressional nomination in order to be considered. You also have to be very fit and involved in sports and have various leadership positions in the community and school should also be your priority,” Choudhry said.

Military academies, especially West Point, are very competitive to get into, according to PrepScholar, an online blog dedicated to helping students prepare for standardized testing and applying to college. West Point itself is a highly selective school, the institution has a 10 percent acceptance rate, according to the same source. Choudhry said those who are interested in applying to a military academy should begin the application process the summer of their junior year of high school, which is much earlier than regular applications for United States post-secondary education programs, which often begins senior year of high school for most applicants, according to PrepScholar.

Both Vradenburg and Choudhry find the military path appealing because of the incentive to serve their country with honor; however, there are many other perks to going down this road.

“Students [who swear in to the National Guard] gain 100 percent tuition payment to colleges and technical schools in the state of Missouri,” Sgt. Johnson said. “They also gain leadership skills and future employment opportunities.”

Crowe said she joined partially because of the benefits the National Guard will provide her with, like tuition aid and housing. Each service branch—Air Force, Army, Coast Guard, Marine Corps, Navy—has unique programs that can help with tuition for anything from professional certifications to a graduate degree, according to Today’s Military. Tuition Assistance also pays for up to 100 percent of the cost of tuition or expenses. Selected Reserve and National Guard units also offer this program, although benefits may vary.

Incentives offered by the military, such as the minimal debt, are attractive to 18-year-old high school graduates navigating the complex world of student loans and tuition, which is one reason why those like Crowe, Vradenburg and Choudhry have either sworn in or explored the idea of military after high school. College applications and life-changing decisions may prove frightening for students, and military programs in place help to steer confused teenagers in a positive direction, an experience Crowe has enjoyed.

“I am excited for the future because the drills for the national guard [that] I’ve been to so far [are] super fun, and it’s such a great environment,” Crowe said. “And it makes me a lot less scared of having nowhere to go after high school.”

What do you think about a military path after high school? Let us know in the comments below.