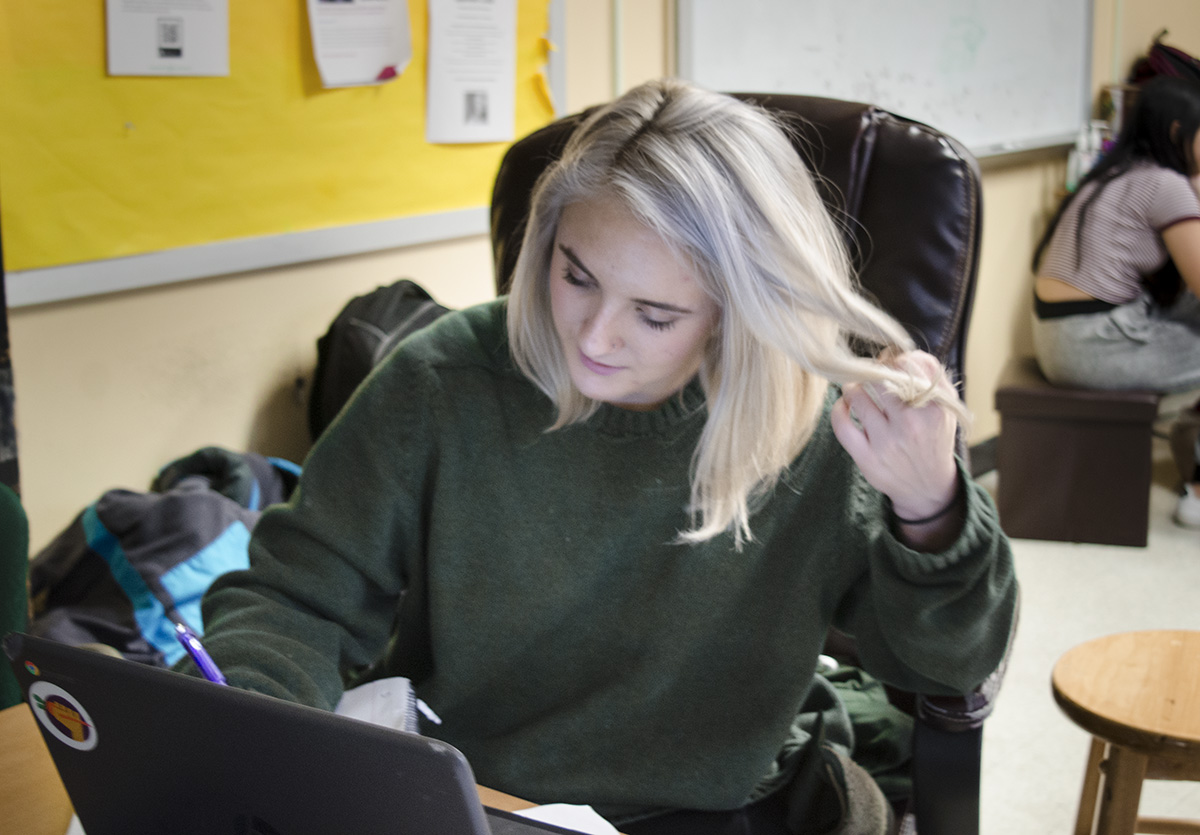 The quiet tap of a foot on the carpet floor or the quick movements of students shifting in their seats reveals a few ways students release pent-up energy during first hour. The classroom is humming with noise, the shuffling feet on the carpet and flipping papers contribute to the hum of background noise. These motions are not completely aimless, as they pertain to the feeling of minor agitation, also known as nervousness.

Habits are routine behaviors repeated frequently and tend to occur subconsciously; they take place outside of conscious thought, Renee Stucky, a clinical practice professor and psychologist at the University of Missouri—Columbia, said. The aspect of agitation from a habit happens in response to the feelings of anxiety or insecurity that are uncomfortable to people.

“When these emotions transpire, there is an increase in arousal and energy in the body.” Stucky said. “This growth is mitigated by movements such as biting nails, licking lips, twirling hair, or sweating, which releases anxiety and result in a feeling of reinforcement for the individual.”

“Not all ‘nervous habits’ are harmful to your health.”

Renee Stucky, clinical practice professor and psychologist at the University of Missouri—Columbia

The settling emotion of tranquility people feel is the main cause for the repetition of habits, in order to reach the calmness again, Stucky said.

For sophomores Cassie Morse and Kendall Flaherty, nerves kick in before a test they are stressed about. Their habits, however, are not limited to nail biting or sweating palms.

“If it’s before something I’m worried [about] and have really bad anxiety about, I talk a lot,” Morse said, “but usually I take my necklace and I just twist it and move it up and down.”

This motion has a calming effect on Morse before exams and helps her release nervous energy from stress. On one hand, public speaking does not have a strong impact on Morse’s anxiety levels. Flaherty, on the other hand, a musician, feels anxious during public performances. She said tapping her foot or picking at her nails are her most common tics.

Stucky said high school is a time of social and academic pressure, since it is during a stage of increasing independence and responsibility. She said an increase in the growth of habits for teenagers is due to the quick and demanding transition they have into maturity. The development of habits is not limited to young adults; it can be found in people of all ages. Whether or not one’s behavior must change, however, depends on the habit itself, Stucky said.

“Not all ‘nervous habits’ are harmful to your health,” Stucky said. “If a nervous habit is bad for your health, be it emotional, social, or your physical well being, then it would be best to break the habit.”

“If an individual has [already] developed effective ways of coping with anxiety, such as deep breathing, meditation, exercise, then they may not be as prone to developing a nervous habit.”

Renee Stucky, clinical practice professor and psychologist at the University of Missouri—Columbia

The steps to break a harmful habit, Stucky said, begin with recognizing the habit itself and how detrimental it is. Several toxic habits include smoking, vaping, excessive drinking and slouching, according to Rush University Medical Center. Smoking and vaping can damage heart and lung health, and lead to stroke. Excessive drinking in the long-term contributes to depression and mental health problems, as well as branches of cancer and heart attack, while slouching may lead to spine and neck issues. It is helpful to understand the “when and what” of the habit, Stucky said, specifically when the habit occurs and what triggers the habit. She said the easiest way to stop the tendency is to replace the habit with a healthier behavior.

“Instead of an individual biting their fingernails, they may instead replace that with rubbing their fingers together,” Stucky said. “More generally, engaging in activities to promote anxiety management, such as exercise and yoga, can help to break a bad habit.”

Anxiety and developing nervous habits have a positive correlation: the higher one’s anxiety, the more likely he or she is to develop a habit. While it is possible to overcome the practice, there is no specific timeframe to the solution, according to Time Magazine. There are techniques for those who want to move away from the habit.

“If an individual has [already] developed effective ways of coping with anxiety, such as deep breathing, meditation, exercise,” Stucky said, “then they may not be as prone to developing a nervous habit.”

What is your nervous habit? Let us know in the comments below.

What is a nervous habit you struggle with?

"I bite my nails a lot. It used to be really bad when I was little because I would go on car rides, and I'd get super anxious so I'd chew my nails. . . I can never keep my nails painted." - Candace Osborn, junior
"You'll see sweat droplets on my forehead. . . I'll put my hands in my jacket pockets and sometimes I'll start shaking and my legs give it away." - Shadid Shakhawat, sophomore

How do nervous habits affect your life? Let us know in the comments below.

Behind the screens: Team managers bring stability and support

I did not realize all of my nervous habits until I read this. I think it is strange that people have different little routines they do when they are focused or nervous.

This article really highlighted the little habits that I do everyday lke biting my nails everyday that I didn’t even notice. It was intriguing to see other students’ habits as well.

This is a really interesting article. I definitely have nervous habits I do when I’m stressed. Ways of coping with anxiety like meditation and exercise are very important.