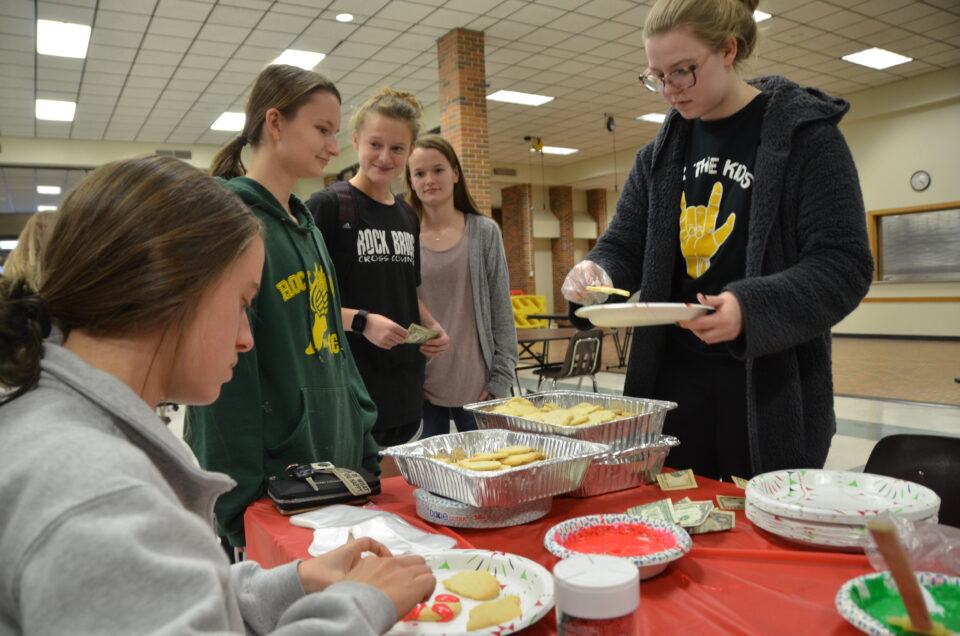 In light of the winter and holiday season, RBHS’ Bruinthon held a holiday cookie decorating event Friday, Dec 13. to raise money for the MU Columbia Women’s and Children’s Hospital. Organizers said they hoped to increase awareness and recruit new members to the club.

“We wanted to have a winter/holiday event to bring awareness to the club but also raise money for the hospital,” junior leader Lauren Munns said. “The leaders have had multiple meetings to discuss ideas for fundraising, and we agreed that cookie decorating would be a fun and inclusive event to get to know potential members and introduce them to our club and organization.”

Those who came to decorate had the choice of five winter and holiday themed cookies such as candy canes and gingerbread people as well as colored frostings and sprinkles. Bruinthon members baked the cookies themselves as a bonding activity.

“The night before they were out until 10 baking cookies for [the event],” junior Olivia Declue said. “About 20 minutes before they were in [Neal] Blackburn’s room whipping up some icing while simultaneously making a mess. But hey, its for the kids.”

Bruinthon leaders held meetings in the previous weeks in order to discuss the where, when and how of the event. Deciding upon a cookie decorating event held in the cafeteria after school.

“Cookie decorating was a fun way for the Bruinthon leaders to incorporate holiday festivities with their fundraiser for pediatric patients at the MU Women’s and Children’s Hospital,” Declue said. “Beforehand we were in Blackburns room, and I walked in, and there was milk all over the floor. Half the girls had icing all over their faces, and two of them were running around the room threatening each other with [the] force of icing. And then after we made the cookies, we compared bite sizes in them, so that was cute.”

Bruinthon raised $56 in donations through the selling of decorative supplies and cookies. The event proved helpful in brought awareness of the club by fostering an interest in the school community as well as recruiting new students to their organization.

“It was really fun just to hang out with friends,” Declue said. “The cookies were good, too.”

What’s your favorite winter holiday activity? Baking cookies? Decorating a gingerbread house? Let us know in the comments below

Dinner and a Murder: Episode 11 “The Black Dahlia”