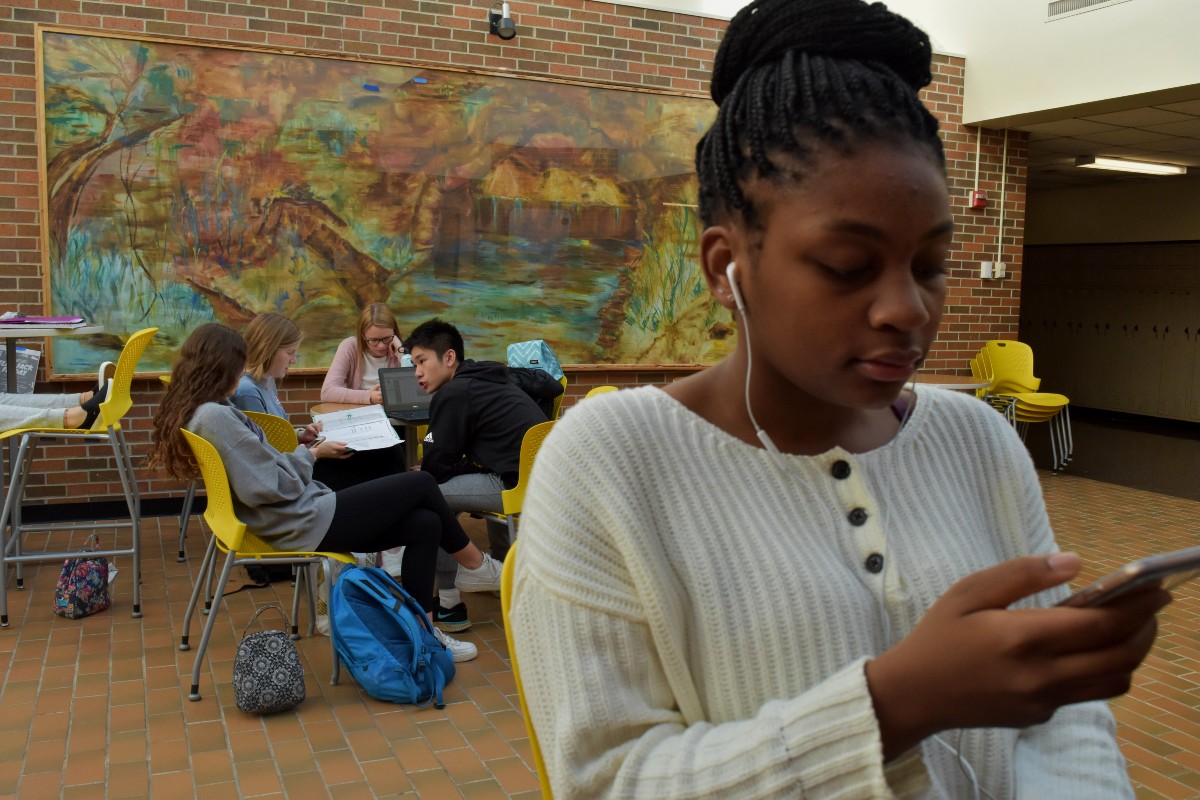 Is it possible to be in two places at once? Reasonable physics would completely disregard the idea, but teenagers often relish in the thought. Literally rather than rationally, however, one can stay so busy it feels like their in two places at one time, but only if their willing to suffer the consequences: surrendering their sanity, mental well-being and social state of mind. Often brushed aside, all of these debilitating harms are generally deemed a fear of missing out (FOMO), something I struggle with on the daily.

The word “no” just doesn’t seem to be in my vocabulary. I can’t resist the occasional late night movie, dinner date or ice cream run despite the mounds of homework piling up at home or the hours of sleep I’m desperate to catch-up on. I’m completely unable to turn down the deceiving allure of fun, and, as a result, my happiness runs dry, and procrastination to get important work done takes the wheel.

This feeling falls under the intimidating acronym of FOMO. It puts a heavy weight on my shoulders when I’m trying to plan my evenings and anxiety from deciding between things to do wrecks my agenda. In a way, I wish I could be both curled up in my room bingeing another Netflix episode and hanging out with my friends doing whatever we end up agreeing on that night. I just can’t seem to pick.

FOMO, a word added to the Oxford English Dictionary in 2013 following the appearance of the Internet, is slang for the anxiety someone feels from missing out on a seemingly exciting or interesting experience often aroused by posts on social media. The feeling prompts symptoms of discomfort and worry. When I turn down an invitation to go to a friend’s house or go out to eat, I often bear the repercussions later on Snapchat when they each send and post pictures together without me. Frequently, I regret my choice even though the decision was probably necessary for my mental health.

I just want to do everything. Is that so much to ask?

As the first semester of my senior year comes to a close, the stress as a result of FOMO has grown worse. I don’t want to miss out on the fun high school experiences I may not have indulged in during the past three years. Additionally, I’m equally exhausted from thinking about the looming threat of college and making the last remaining memories with my high school friends: people I’ve known since before I learned to walk.

I just want to do everything. Is that so much to ask?

Simply, yes. It’s way too much to ask. I’m pulling myself in multiple directions, and it proves overwhelming as things I actually need to do, like homework or essays, are pushed back further hours or even days later from when I was supposed to get them done.

Growing up in the constantly connected world of social media and instant messaging has fueled the fire of FOMO for many teenagers, more than 56 percent of social media users ages 18-30, according to MyLife.com, a hub helping others manage their online life. We sleep two inches from our mobile devices, text and drive and flinch at the sound of a vibrating iPhone just because we don’t want to miss out on what is happening. My generation has grown up in a society where everybody knows everybody else’s business. Be it who’s now dating who or the social event I didn’t get invited to, everybody knows about it because it’s always updating on Instagram or Snapchat.

To make matters worse, Snapchat now tracks my friends and I, as long as they also toggle that option to on. I can easily pick up my device, tap the bright yellow app distinguished by the infamous ghost icon, swipe down and see where my friends are if they also recently opened the app. That party I didn’t get invited to? It stares me straight in the face with a long list of names huddled together at one location. All we want is to participate — be involved, remembered and included — and social media makes FOMO even harder to cope.

Knowing I’ll be moving on from the drama that is high school in a mere five months allows me to somewhat persevere through the effects of FOMO. Scrolling through posts of friends and acquaintances celebrating the holidays or spending time together on the weekends still hurts my innate desire to be liked, but I make choices to stay home some of those times.

It’s OK not to want to be out and about all the time. School is stressful; constantly pleasing others is taxing, and sometimes I just need a break. It’s more than OK to say “no.”

To make matters a little better, people are only putting what they determine is their “best” on social media — their best outfits or experiences. In all fairness, they probably aren’t having that much fun. I already feel so much better sleeping in after a long week rather than getting up early to attend that breakfast date with my friends. I’ve found ignoring my FOMO leaves me happier and my mental health better in the long run.

It’s OK not to want to be out and about all the time. School is stressful; constantly pleasing others is taxing, and sometimes I just need a break. It’s more than OK to say “no.”

My antidote to this deadly social disorder has been unplugging from the online universe and building more authentic connections with genuine people. As an addicted social media user, Instagram has always topped my list for the weekly reminder on Screen Time, Apple’s friendly way of telling me I’m spending too much time on my iPhone. Not only does the updated function make me feel bad about my habits, but it also helps me understand where my FOMO is rooted in. I’m jealous of the fun everyone else seems to be having on Instagram when in reality I’d still rather be lazy and rewatching “Friends” for the umpeenth time.

Growing up with the best of friends and family, people who truly care about me, my feelings and have my best interests at heart, assists in alleviating some of the FOMO pains. My friends and I love the midnight Waffle House meals and after-hours Andy’s trips, but we also understand time away from each other keeps us sane.

Remembering it’s OK to say “no” to the people I love influences a change in my behavior and attitude towards the social media influences happening around me. I’m not missing out. FOMO has resulted in way more stress than was necessary at times, and, even though I’m still struggling, I’ve found a way to enjoy more alone time on the weekends thanks to “The Office” and dozens of cheesy Christmas movies.

How do you cope with FOMO? Let us know in the comments below.