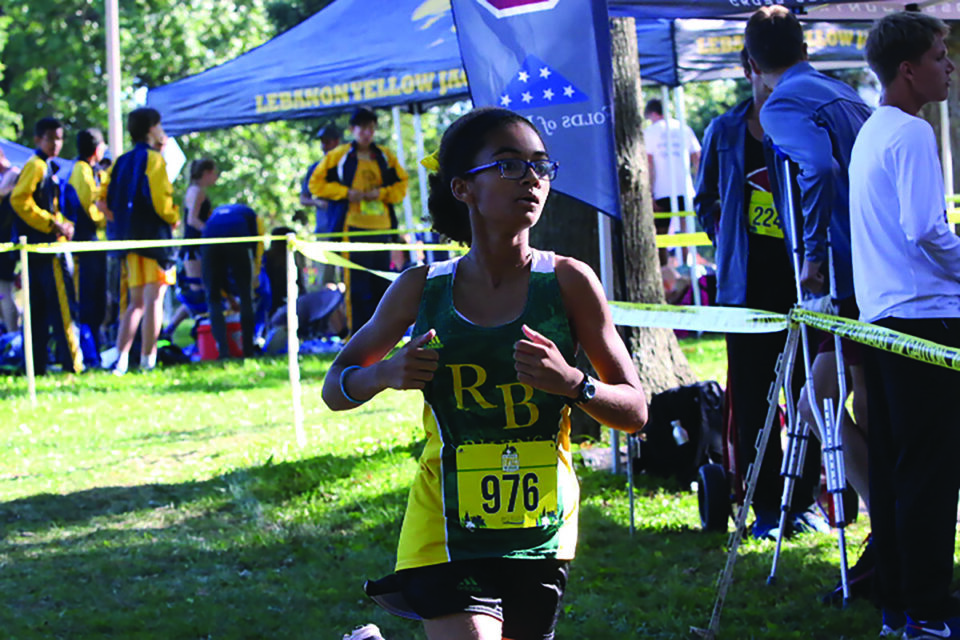 Adjusting to the halls of RBHS from middle school doesn’t seem too intimidating on Jumpstart day. Freshmen receive their schedules, learn which rooms their classes are in, participate in the rollercoaster and are exposed to various clubs and organizations. But once school begins, the first few days are difficult to get used to.

Whether it’s adjusting to the sleep schedule, parking and parent pick up system, lunch menu, student laptops, newfound freedom or sheer size of RBHS, freshmen can easily be overwhelmed. For some students, athletics are a way to experience a smooth transition from middle to high school through bonding and playing on different sports teams. With 12 total Missouri State High School Athletic Association (MSHSAA) sports for boys and girls, there is abundant room for student athletes at RBHS.

For freshman Carolyn Ford, her transition from Gentry Middle School (GMS) to RBHS wasn’t too difficult, and participating in athletics helped create a more fun and seamless transition. Ford said the switch to RBHS “was weird [because] the lunch line got bigger, and there were so many [more] people.” With experience running cross country since the seventh grade, Ford set a goal to catch up to sophomores Mallory Gard, Maci Steuber and others who were teammates with Ford at GMS.

“The hardest thing to adjust to was balancing sports and school. When you regularly get home at 7 [p.m.] but then have to eat and do homework, you can get pretty stressed. It took some trial and error, but my final solution was to do homework right before and after practice.”

Ford ran as a varsity member during the season, dishing out historic performances, like when she placed first at the Gans Creek Classic in September, and learning moments. Ford recalled an epiphany that displayed the difference in the level of competition between middle school and high school.

“My biggest rookie moment came when I got dusted by Camille Jackson in [a meet] in Iowa,” Ford said. “She beat me by almost 70 seconds to get first [place]. I finished the race thinking, ‘Wow, she’s really good.’ Having that large of a [time] gap between us was certainly a [great learning] experience.”

Jackson, a senior from Ames High School, stunned Ford with her performance. From this, Ford became motivated to work harder to close the distance between her and the competition. Her work paid off, and Ford became the first freshman, boy or girl, in state history to win the individual state title for cross country this past season, beating her closest challenger by a five seconds, a decisive margin the sport, at the Gans Creek course in Columbia.

“The hardest thing to adjust to was balancing sports and school. When you regularly get home at 7 [p.m.] but then have to eat and do homework, you can get pretty stressed. It took some trial and error, but my final solution was to do homework right before and after practice.”

Boys’ and girls’ cross country head coach Neal Blackburn spoke highly of the 15 freshmen who participated on the team. Including Ford, freshmen Ian Kemey and Morgan Sexton also received varsity letters. When pinpointing Ford’s success in particular, Blackburn couldn’t reference just one reason, saying it “was just a great mix of a lot of different things.”

“There were a lot of variables that allowed for her talents to surface,” Blackburn said. “The fact that she committed to doing work with the team [helped her] develop relationships with those other girls. Her outlook on races, and also just balance [with] levels of expectation, not going through the roof or over the top but trying to keep things level. . . played a role in really allowing her talents to surface.”

Fellow freshman Ella Swindle arrived at RBHS determined to bring a “winning culture” to the volleyball team; however, Swindle spent most of her athletic career playing tennis, only starting volleyball when she arrived at GMS.

“Tennis was really lonely, and I missed having someone to talk to,” Swindle said. “[Being] encouraged whenever things aren’t going my way [was something] I really liked about volleyball. I like that about team sports and how you can encourage others.”

Swindle moved from playing tennis to volleyball in sixth grade, and during her eighth grade year helped GMS achieve an 18-2 finish and a regular season championship. She then participated in a highly competitive volleyball club in Kansas City in seventh and eighth grade, which fueled her passion for victories. Swindle then accomplished a phenomenal feat by making the U.S.A. High Performance A1 select division the year before she arrived to RBHS. This league produces future U.S. national team prospects and Olympic athletes.

“When I was selected, I was so excited. It was such a huge honor to be selected to play with some of the top athletes in the nation,” Swindle said. “I’m dreaming that my volleyball career will take me as far as possible.”

Standing 6-foot-2, Swindle often towers above opponents as the setter. She began playing the position in seventh grade and soon “became hooked.” Similar to a point guard in basketball, Swindle’s position is responsible for creating scoring opportunities for the team, but she must also block, serve and defend to help the team win. The skills Swindle displayed as a setter throughout the year earned her a spot on the Class 4 All-State girls’ team. She was the only freshman to make the team.

Much like Ford, Swindle said joining a sports team also helped her transition to RBHS from GMS. The early friendships she made with her team members gave her a family and created a welcoming group in the school’s massive crowd of close to 2,000 students.

“Our first tournament was an overnight one in St. Louis, and it was a really good experience,” Swindle said. “We had a lot of team bonding and really tight friendships came out of that [along with] night practices. My teachers [were] always helpful and great and really helped me whenever I missed class.”

“Her ball placement is really awesome right now. Her block is huge. She’s really tall, and she [has] a great center dump. When she goes up on the second hit instead of setting for the third hit, she attacks the ball almost like a kill. A lot of referees around this area haven’t seen a setter dump a ball the way Ella does. I think if she improves [her serving] and moves the location of her setter dumps, she’s going to be unstoppable.”

First-year head coach Nicole Murphy knew she wanted to revamp the program, starting with practices. From day one, Murphy knew how much of a crucial role Swindle would play in the team’s success.

“I knew [the program] didn’t have a very successful past, so I really wanted to change the mindset of the program by instilling a winning mentality,” Murphy said. “[Ella] has the experience of being a tall setter and I think it’s awesome that she got the opportunity. . . leading the program as a freshman setter, and as a setter, accomplishing great things.”

Murphy said she is happy with how much talent Swindle displayed during matches. With so much time left to grow, Murphy is excited to see how Swindle will develop.

“Her ball placement is really awesome right now. Her block is huge. She’s really tall, and she [has] a great center dump. When she goes up on the second hit instead of setting for the third hit, she attacks the ball almost like a kill. A lot of referees around this area haven’t seen a setter dump a ball the way Ella does,” Murphy said. “This year we worked with her on her serving [because] it was kind of inconsistent all season. I think if she improves [this] and moves the location of her setter dumps, she’s going to be unstoppable.”

Unlike Swindle, Ford already had a lot of experience in the sport she pursued at RBHS. Growing up, Ford loved to run and at GMS, Ford competed primarily as a sprinter. At this time, Ford said she ran “for herself.” When she arrived at RBHS, Ford said her mentality changed to running for her teammates. Ford also said the coaches and entire coaching staff for cross country helped her develop herself while still having fun. Without their feedback, Ford said her season could have been different.

“All of the coaches were super supportive. Coach Leach [made me] laugh [and] coach Gabel was easy to talk to. . . coach Blackburn would talk for 45 minutes every day, but those were probably some of the most inspirational 45 minutes of my life,” Ford said. “All of my teammates were super helpful. . . The ones that did the most were probably the girls’ varsity group, as they showed me the ropes. This [encouragement] was greatly appreciated.”

Blackburn said Ford’s performance is inspirational, not just for current RBHS athletes, but for future runners in upcoming years. He said that seeing Ford, Kemey and Sexton all discover their potential is amazing.

“[Carolyn’s performance] is going to raise the level of excitement for what they can do as individuals [and] as a team,” Blackburn said. “I think, more than anything, it really gets people more committed to doing what it is that we hope they’re capable of doing. . . Every single one of them can make a contribution.”

After memorable and positive freshmen campaigns, Swindle and Ford look forward to getting better during their next three years. For Ford, this means more focus on her stride when running on grass and to improve her mile time. Swindle is just as eager to return to the postseason and advance further after her team lost to Hickman in the district tournament. More than anything, both are grateful for the new friendships, player development and team support.

“I think that the freshmen were very welcomed coming in. We had a lot of open gyms over the summer, so that helped everyone get acclimated to the culture [of] Rock Bridge,” Swindle said. “As far as next year goes, and future years in general, I think that I want to establish a competitive culture and let everyone know that [we] can do big things.”