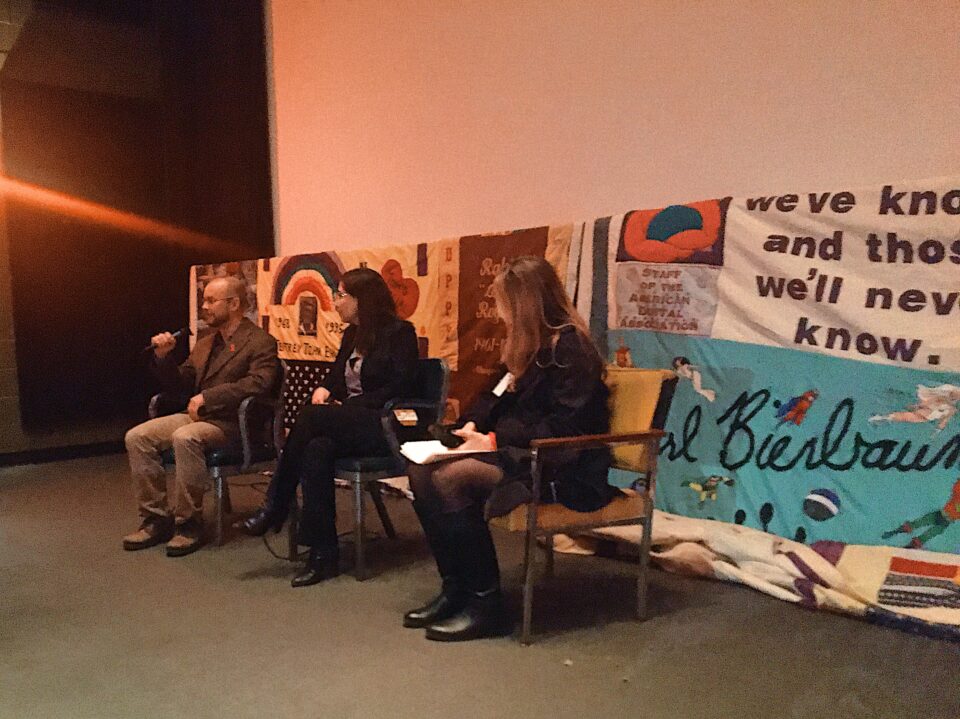 A free screening of the documentary How to Survive a Plague and a panel discussion with medical professionals took place at Ragtag Cinema Monday Dec. 2. The event celebrated the 2019 World AIDS Day, and a piece of the AIDS memorial quilt was on display.

David France’s How to Survive a Plague takes place in the 1980s and 90s during the worst of the AIDS epidemic, where incidence peaked at 300,000 cases in 1993. It follows the activism of the New York group ACT UP that fought for government funding for AIDS research, a cause largely ignored or opposed by government officials. They feared homosexual men would spread the “gay disease,” as they called it, to the rest of the population, which stirred prejudicial feelings. The documentary featured scenes of mourning, rallies, defeat, disagreement and finally rejoice as the activists were able to infiltrate agencies such as the Food & Drug Administration (FDA) and National Institutes of Health (NIH) to force AIDS research into policy.

After the film, the audience turned their attention to the AIDS quilt, which was featured in the film at the 1987 Washington Monument protest. It was created to honor those who died from the disease but also served as a reminder to the federal government of all the lives they could have saved. Boone County Health Educator Tracy Bathe listed names of deceased victims, which is tradition to do whenever the quilt is presented.

Bathe was also a speaker on the panel, which led a question and answer session. Also present were physician Dima Dandachi from the MU Department of Infectious Diseases and HIV researcher Marc Johnson from the Bond Life Sciences Center. They answered questions about research, education and stigma.

“We always want [people to be able] to make the easiest decision possible, the most accessible,” Bathe said. “But yet, there is that balancing act. For the people who are in areas or states or wherever where there’s such stigma [about] going to the doctor, they do not want to go; they do not want to talk about it. if they talk about it, they feel that they [have] perhaps outed themselves.”

Dandachi said she deals with many patients who don’t tell their families they have HIV because they are ashamed. Beyond the mental and emotional harms, the stigma that surrounds sexually transmitted diseases is also one of the driving forces that perpetuates the diseases.

We still have a lot of stigma, stigma for patients who are living with HIV. People don’t get tested because they are concerned, and that’s one of the major things that could affect the transmission of the virus.

Junior Candace Osborn watched And the Band Played On in her Contemporary Issues class, a film that extensively discussed stigma and judgements surrounding homosexual men and AIDS. She said the film opened her eyes to how proper education on STDs caused the nation’s attitude toward this issue to shift.

“I really think that learning about sex education in schools can prevent the furthering of harmful ideas and titles surrounding these diseases, specifically AIDS,” Osborn said. “I remember freshman year when I took health and we were on the unit about STDs. Our teacher told us that the idea of AIDS being the ‘gay man’s’ was wrong and that it affected people no matter [their] sexuality, and her addressing that subject really showed me the importance of making students understand the discrimination of others is wrong.”

Dandachi said because of higher stigma and reluctance to get tested, HIV infections have increased by 11 percent in Missouri over the last few years. Johnson also added that although How to Survive a Plague ended optimistically, the disease is still an epidemic.

It’s still a growing problem. There [are] more people living with HIV now than during the worst part of the epidemic because people are still getting infected. It’s the most it’s ever been, so that problem hasn’t gone away.

With continued development on the AIDS epidemic, change can occur on both a national and local level. Bathe works with 37 counties in Northeast and Mid-Missouri to provide financial support, free testing, training and education.

“We make sure that we are doing education and prevention everywhere, not just for adults, but also for youth as well,” Bathe said, “and then things like this — community events where we really, really, try to let the public know what is going on and make sure we gather community partnerships.”

Have you noticed stigma surrounding STDs in everyday life? Let us know in the comments below.

‘Parasite’ chills, excites as a commentary of class conflict

Junior Sarah Ding is the Commentary editor for The Rock and Bearing News. She is also a part of the Girls’ Tennis team and enjoys traveling, painting and cooking.