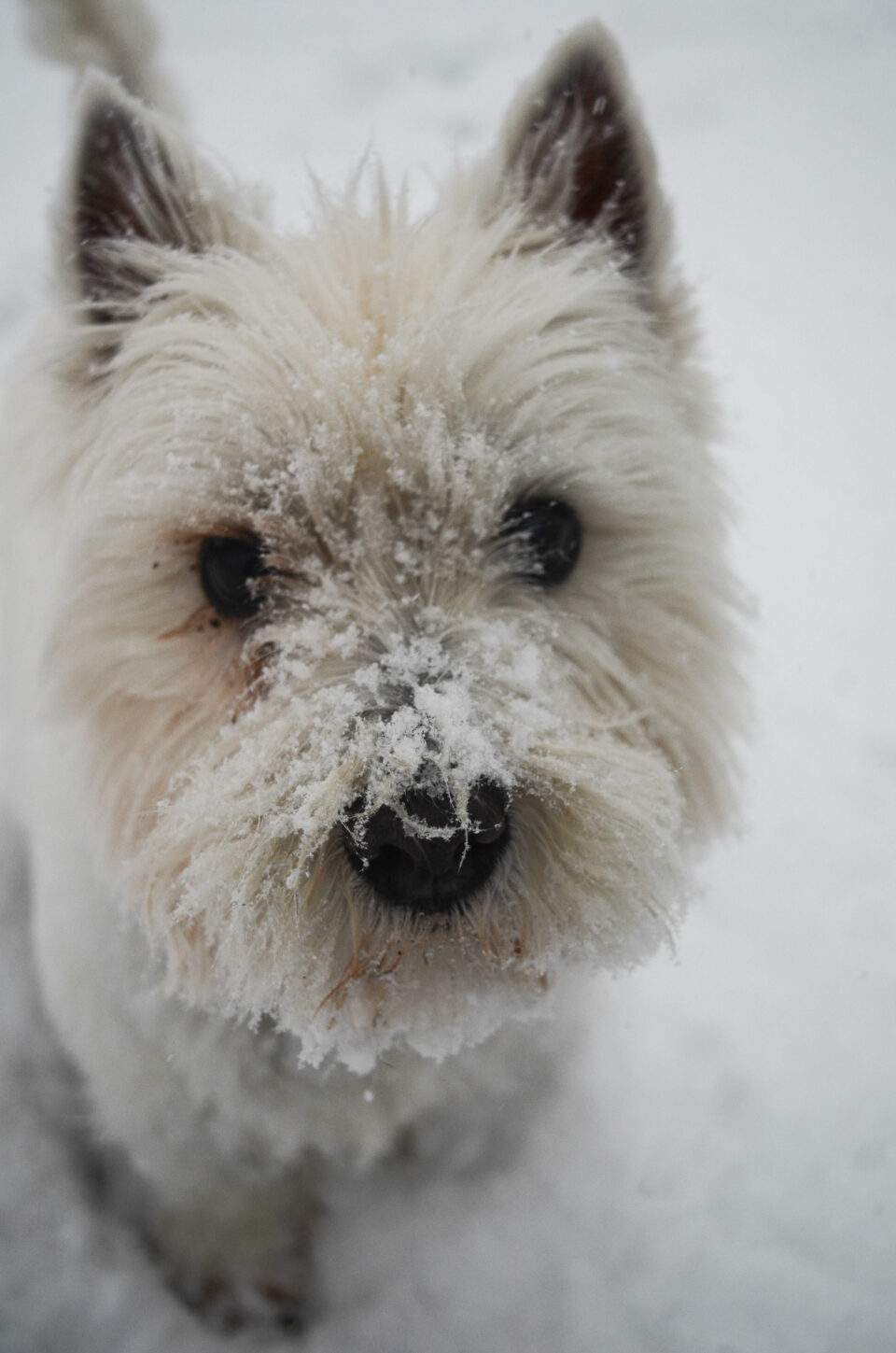 In a world of consumerism, we endlessly take in items and information. Things like social media and the news make it seem as though problems in the world are never ending. It’s easy to feel drowned by information and conflict.

But we all have something that grounds us. I seek that comfort and simplicity from my dog, Luka.

I took this photo Sunday, Dec. 15. I had not slept the night before, busy with photoshoots and homework that was due for finals week. I was extremely drowsy and irritated because there was no milk in the fridge, which meant I could not make myself a cup of coffee. I was stressed out and realized I needed a break from my schoolwork. I looked outside the window at the never ending stream of snow that had been falling from the sky since the early hours of the day. Seemingly against my will, I began to get dressed, tugging on my tough, black rubber boots and a thick, red jacket.

I wrapped my camera in a plastic bag to protect it from the snow, called out to my dog and stepped into the bone-chilling cold of my backyard. I let Luka run around, snapping some photos of Luka running around wildly. There’s something about putting all my focus on a singular task that allows me to destress. Finding myself in the rhythm of photography, shoot, adjust, repeat, allowed me to forget the homework that sat on my desk, waiting to be completed. My responsibilities were no longer at the forefront of my conscience.

At one point, Luka slowed his frenzied running. He sat right in front of me, at the perfect distance to where he would be in the focal range of my camera. I held down the shutter button and took the photo. He looked straight into the lens, snow reflecting off his snout, big black eyes staring at the camera.

I shot with a relatively high f number of 4.5, which means the shutter was open relatively wide. Digital single-lens reflex cameras (DSLRs) open and shut their shutters in order to capture photos. The f number dictates the aperture, which dictates how much that shutter opens and closes. A lower number means the shutter opens wider, letting in more light, and a higher number means the shutter will be more narrow. A lower f number also means more will be in focus in the photo, and a higher f number will cause one part of the photo to be in focus and other parts of the photos to be out of focus and blurry. Another setting I had to look out for while taking these pictures was ISO

I used an International Organization of Standardization (ISO) of 400 for this photo. ISO dictates how much light the camera lets in. Not only was I outside, but also the snow on the ground reflected a lot of sunlight. If I shot with a high ISO, the snow would be too bright compared to the other parts of the photo. I did not need too high of an ISO. Truthfully, my main concern was not letting in too much and making the photo overexposed.

I had to make my shutter speed 1/640 per second to accommodate for my dog’s running. Shutter speed determines the velocity at which the shutter in the camera opens and closes. If I am taking pictures of a subject that moves quickly a high shutter speed is crucial for sharp photos. If my subject moves too fast for the shutter speed I have set, the photo will be blurry. A higher shutter speed also makes photos darker, forcing the photographer to either make his f number lower or his ISO higher.

I took this photo using the autofocus mode on my camera. When I have to take photos of a subject that moves fast and is unpredictable, this mode is a necessity. Not having to worry about manually focusing my photos allows me to change positions and angles without having to spin the manual ring around the lens everytime I press the shutter button. When I take photos in manual, they have a higher probability of being out of focus. I found in this situation I had a better chance to get a good photo using autofocus mode.

While it may seem complicated to someone who is inexperienced in photography, I find the complexity of the settings one of the most satisfying things about photography. The challenge that comes with having the appropriate setting, the shot being in focus and getting the right angle, is what makes a good photo rewarding. The joy that comes with capturing a beautiful photo is simple.The Japanese word “shibui” refers to the beauty in simplicity. For me, shibui means a lack of clutter, a lack of obligations and complications. My dog’s carefreeness embodies shibui.

Marching band is a performing art, not a sport

Our words have an effect