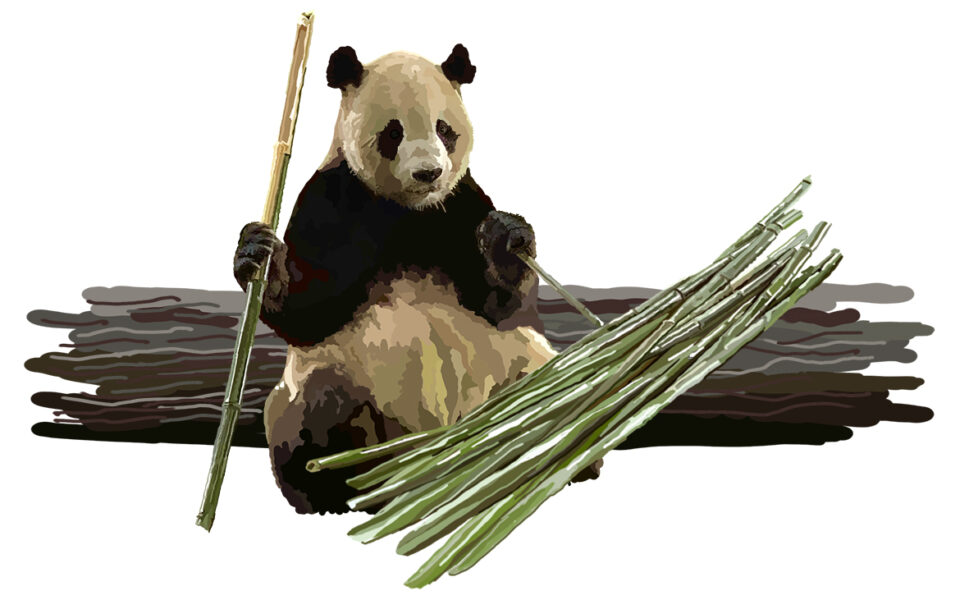 Last summer I was lucky enough to travel to my birth country, China, with my mom, some of the girls from my orphanage with and their families. Beijing was the first leg of our two-week tour. During our time in Beijing, we walked through the Forbidden City and climbed the Great Wall, which was more exercise than I had done all year. After the extreme 96 degree heat and rigorous physical activity, we were all happy to get on a plane to our second, more slow-paced location: Chengdu.

Located in the Sichuan Province, this city, according to our tour guide, is best known for three things: opera, pandas and spicy food. In our two short days there, we experienced all of them and got a taste of daily life of the citizens.

Our flight landed around 4 p.m. As soon as we entered the airport, the difference between the rush of Beijing and the leisure of Chengdu was apparent. We took a bus to a large park nestled amidst towering bamboo to have tea. Dating back thousands of years, tea culture has become part of the locals’ everyday life. The city has developed its own tea customs involving the preparation and consumption of the drink in aesthetic surroundings. Throughout the park there were couples taking a stroll, groups learning Tai Chi and families who were also having afternoon tea.

The people playing mahjong, however, were who captured our attention. The traditional Chinese tile game occurred on square, green felt tables sitting around the park. Four older women in their 60s, who were incredibly skilled at the game, sat a couple of tables away from us. When we showed interest their tile shuffling, they allowed us to observe as they continued their game. The movement of the women’s hands as they drew and discarded tiles was like a choreographed dance. Their flow and synchronization was mesmerizing.

After a couple of rounds, more people congregated around the players, so we slipped away. We found a vacant table, and since none of us knew how to play mahjong, cards was the next best thing. I had a deck in my bag, so I took it out and started shuffling. We spent the rest of our afternoon at the park watching people, playing cards and drinking tea, something I could’ve gotten used to doing every weekend.

In the evening, after checking in to our hotel and eating dinner, we experienced the first of the three famous things of Chengdu culture: the Sichuan Opera. The production was less of a traditional, musical theater type opera that we are familiar with than it was a variety show. The performers blended drama, comedy and music into their already unique talents, such as shadow puppetry, fire-spitting and long sleeve fluttering (an ancient Chinese dance performed wearing sleeves up to 80 inches in length). Although all were impressive, none were as jaw-dropping as the face-changing finale, the most well-known part of the show. The performers wore colorful full-face masks that they were able to switch in the blink of an eye. Their faces went from yellow to blue to green to red within seconds. Their countless hours of practicing the precise techniques allowed them to pull off what to us seemed like magic.

My friends and I were fascinated and curious as to how they transitioned so flawlessly. We spent the entire act trying to solve the mystery, throwing out theories, none of which stuck. It was only at the very end of the curtain call that we believed we had cracked the code, but that’s a secret I’ll never tell. Though our day was long, it wasn’t nearly as exhausting as our days in Beijing.

We spent the morning of our second day at the Chengdu Research Base of Giant Panda Breeding. It was early enough that the reserve wasn’t crowded yet, so we had the pandas all to ourselves. Only a short walk from the entrance was the first open-air enclosure. It was near the time of the morning feeding, so as we were approaching, the animal was too busy eating away at bamboo to care about its new audience. I had never really thought about how a panda would eat, but I assumed it would be whilst on all four legs, like a dog or a cow. Instead, it is much like a human who has been on a couch for three days watching TV. They sit reclined, usually leaning against a tree, with a pile of their food beside them and use their front paws like hands. 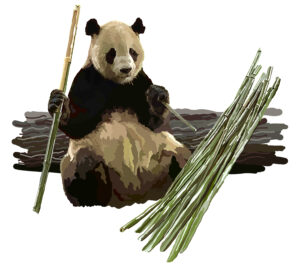 We had already spent 20 minutes watching the first animal we encountered, but we couldn’t stay all day and had to keep moving.

Stone pathways led us through the base to each habitat. Every panda was engaging in a different activity, whether it was climbing a tree, snacking on bamboo or rolling around in the grass. As slow-moving as these animals are, they were quite entertaining. One that we had been watching for a while suddenly jumped up onto the ledge next to the glass, right as we were turning to move on to the next enclosure. He walked directly in front of us as if he were on a catwalk, attempting to keep our attention. Unsurprisingly, it worked.

I wished to spend the whole day watching all of the adorable animals in their habitats, but we had a schedule to stick to.

For lunch, we got a taste of authentic Chengdu cuisine, checking off the third and final item from the list. Our visit wouldn’t be complete without having a meal spiced with the native Sichuan peppercorn. I couldn’t resist the urge to see how hot the pepper was alone, so I picked a peppercorn from a dish on the table. Everyone at the table waited to see my reaction, and when I started to feel my mouth burn, my facial expressions said everything that I couldn’t.  Even though it was only about the size of a kernel of corn, I had never experienced such intense, fiery flavor before. They all offered me water as they tried to keep from laughing. It felt like my mouth was ablaze, and my tongue was tingling for the rest of the meal.

By the time I had finally gotten used to the pace and environment of Chengdu, it was time to leave. We took a bullet train 400 miles northeast to Xi’an, our next destination.

Originally, 40-foot tall walls with a perimeter of almost 9 miles surrounded Xi’an, to protect its people from invaders. As the population grew throughout time, the city had to expand beyond its original limits. Now, the wall separates the “inner city” from the newer “outer city.”

Before entering into the old center where our hotel was, we were able to go on top of the wall. My friends and I made it our mission to travel the whole perimeter in the two hours allotted. We could either walk or rent bikes, so, obviously, we chose the faster mode of transportation. There was an option to pick between a normal bicycle or the more difficult tandem, and since none of us can do anything the easy way, we sprung for the tandems. It took us a few falls (OK, maybe a lot of falls) before finally getting the hang of it. I was volunteered to ride in the front of mine, which wasn’t a good idea because then I had total control of the steering. I would weave between people and get incredibly close to other bicycles, making my partner squeal, “No, no, no!” at me. By the end of the ride, I was so comfortable that every once in awhile I would throw both of my hands up, accompanied by an enthusiastic yell. Whenever I did, however, my expression of excitement was always followed by the fearful screams of my friends, especially my captive companion behind me.

By the time we were finished, we had cycled the entire length of the wall with time to spare. When we returned to where we started, we practically fell off of our bikes because our legs were so tired. Our leisurely ride turned into a race — a workout I was not expecting. As we waited for others from the group to come trickling back, we sat near the inside of the wall, looking over the inner city as we were trying to regain feeling in our bodies from the waist down.

Our stay in Xi’an was even shorter than Chengdu. We only had a one-night stay until we were off to Guilin, our next location. Before leaving, however, we made a stop to see the Terracotta Warriors, the most famous attraction of the city.

China’s first emperor, Qin Shi Huang, ordered the creation of the warriors to protect him during his afterlife. Each life size soldier is completely unique, from its facial features to its clothing. Four farmers discovered the army in the 1970s when they were trying to dig a well and stumbled upon shards of pottery. Archaeologists have unearthed approximately 8,000 soldiers, and only one was still completely intact upon excavation. So far, they have uncovered four vaults of the tomb, but they suspect there are others, yet to be found.

The first and largest vault was the size of an airplane hangar. Through the doors, hundreds of people crowded the railing that overlooked the entire site. Rows and rows of clay soldiers in full formation stood below, with mounds of dirt that archeologists had yet to excavate. On the opposite side of the entrance was the “hospital,” where archaeologists were working, moving and piecing together soldiers. There were piles of fragments stacked near unfinished figures. The meticulous process of piecing the warriors together seemed like a nightmare of a puzzle.

The other three pits were smaller, but still incredibly massive considering the entire army was handcrafted. In these vaults, most of the dirt had remained untouched. Archaeologists have found evidence that the Terracotta Warriors were once painted from only a couple of the remnants. Very little color is visible on the excavated pieces because, once unearthed, the paint oxidizes before the archeologists can preserve it. This is the reason that a majority of vaults two, three and four are still undisturbed.

While walking through the exhibits, we were back at it again, trying to solve another mystery. Between figuring out how the masks are changed during the opera and thinking of a way to excavate soldiers while protecting the paint, we were becoming excellent problem solvers. We were spitballing ideas all the way back to the bus, each more ridiculous than the next because we were so exhausted. Luckily, we were on our way to the airport, where we could catch a quick nap before we had to be on the go again.

Our trip was already half over, and I wasn’t ready to have to think of goodbyes yet. Chengdu and Xi’an were a great change from the hustle and bustle of Beijing. I learned the importance of slowing down and actually taking in my surroundings instead of rushing through an itinerary like a checklist. It has been the little moments, like playing cards or messing around with my friends, that I remember the most. As much as I loved these two cities, I was eager to explore the ones yet to come.

Who would you trust to ride a tandem bike with? Let us know in the comments below.

Senior Riley Kerns is an artist for The Rock and Bearing News. She loves to travel and explore new places. Kerns is interested in visual arts and music. You will usually find her with earbuds, listening to all genres of music. Her free time is spent either playing the guitar or sleeping. Some of her favorite pieces are here.

An ocean away: Yangchun, Guangzhou

An ocean away: Guilin, Yangshuo