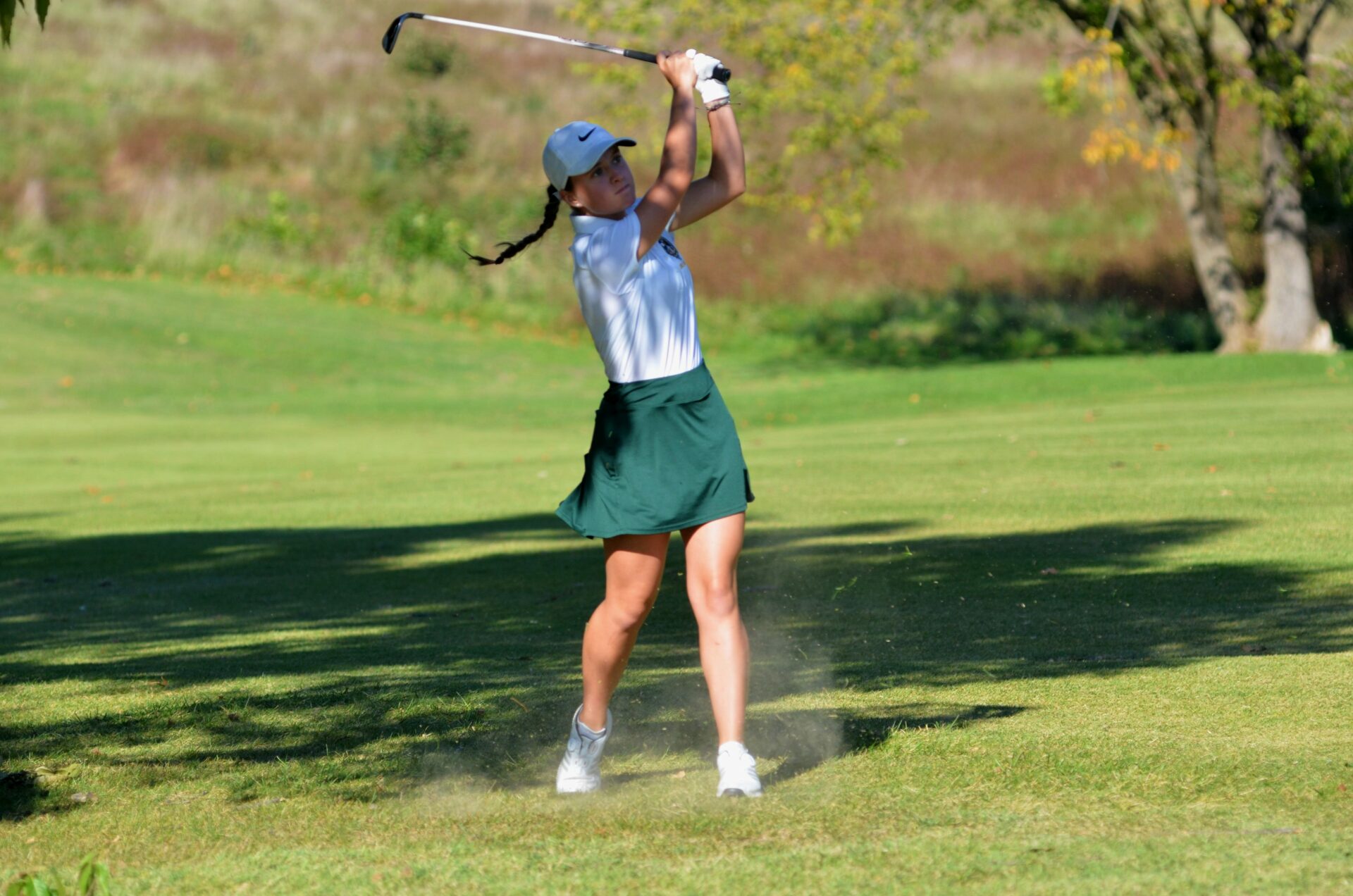 Collegiate-level athletics aren’t worth the clout

As a child I played more sports than the number of fingers on my hands: soccer, swimming, tennis, golf, basketball, horseback riding, track and field, cross country, softball, dance, cheerleading and gymnastics. I tried (and failed many times) to find my way in the world through athletics and the teams I was a part of. I complained loudly to my mom and often found myself in tears when screaming about the pains of shin guards, the itchiness of softball pants and the terrible, extreme summer heat on my fragile skin.

Even though I protested more than I went to practices, I still liked to show off my “athleticism” in what I wore. My closet was always full of the latest Justice t-shirts covered in sparkles and sporty slogans, and I often wore headbands decorated in tiny softball and soccer icons.

As I traversed from sport to sport, season to season, I slowly crossed each off the list; I quit gymnastics around seven-years-old, soccer at nine and softball at about 12. I never really found a good fit. As a lazy yet ambitious child, I think I enjoyed my freetime and lack of responsibilities more than practices and early mornings. The only sport I ever truly enjoyed was one I didn’t start until eighth grade: golf.

The possibility of taking it to the next level was always in the back of my mind: Could I be good enough to play golf in college?

I’ve played golf all four years of high school. I competed at local and state tournaments, achieved, and fell short of, many personal aspirations and considered continuing it at the collegiate level. When I made the varsity team sophomore year, I experienced a world of new opportunities. I played in more 18-hole tournaments than I had freshman year and battled my way through the postseason with my team to reach the podiums. My expectations for how well I could do grew as the years passed, and golf would consume my summers and every fall once I dedicated myself to getting better.

I made friends, missed school and even dyed my hair green, which lasted months, because I was passionate about the sport and we were excited for state. I constantly thought about the future and the end of my golf career and searched for options to keep competing. I couldn’t imagine my life without golf. It was something I enjoyed doing, a way I relieved frustration from stressful school days and atrocious Calculus test scores and an escapade my dad and I cherished. The possibility of taking it to the next level was always in the back of my mind: Could I be good enough to play golf in college?

Junior year I explored the overall task of applying to college and I contemplated potential golf opportunities, too. Academics were a priority for me — I wanted to go to a big school, one well recognized for the major I was interested in, journalism, and then play golf and there weren’t a lot of opportunities for both. Eventually I settled on the fact that I would never realistically get the chance to play at the huge, competitive Division I universities I wanted to go to, let alone make the team. Although my decision against pursuing college athletics was personal and required a lot of time and self-reflection, I was curious as to what other motivations might influence someone to make the opposite choice.

RBHS has a lot of collegiate athlete alum — our athletic programs are exceptionally accomplished, as shown by our overflowing trophy cases and the green and gold banners that cover an entire wall of the main gym. We also have alumni who are now professional athletes, such as Sophie Cunningham, a former Bruin basketball player from 2012-15 and current member of the Phoenix Mercury.

Athletes sign their letters of intent to commit four years of their lives to multiple NAIA universities, Junior Colleges, Division III, Division II and Division I schools every year. But, with so many athletic programs, RBHS and other high schools that unhealthily promote and celebrate sports and this so-called “clout” may influence an individual’s decision in post-high school planning.

What I didn’t initially realize, however, was the intense commitment I would have to make: added stress onto adjusting to college life, extreme outside of school physical dedication that I wouldn’t be used to and the weight and inevitable outcome of not becoming a professional golfer.

Clout, a word spread in the 2010s, according to Dictionary.com, means to have power or influence. Clout easily follows and influences the jock culture, a social stigma prioritizing athletes, of today’s day and age. Playing a sport makes an individual seem athletic and can even make one more well liked, according to a guest post on the blog Night Helper. The source also said this fact is especially true when the sport is very important to the community or your age group.

There is definitely clout associated with continuing an athletic career after high school. Being able to sit in front of friends and family and sign your name on a sheet of paper while adorned in some college’s colors is exciting and fulfilling. After each golf season, I would imagine myself in that position, too. What I didn’t initially realize, however, was the intense commitment I would have to make: added stress onto adjusting to college life, extreme outside of school physical dedication that I wouldn’t be used to and the weight and inevitable outcome of not becoming a professional golfer.

Is it all worth it?

Nevertheless, there are benefits to becoming a college athlete. I could be eligible for an athletic scholarship to pay for some of my schooling, and I would be able to shape my dedication and motivation for getting work done through time management and academic aid. For me, the pros don’t outweigh the cons, yet I believe a lot of inexperienced 18 year olds fall prey to the commitment they agree to when they sign on anyways. Are some athletes committing because it’s “cool,” or are they making this big life decision to be able to afford college?

Athletes should really think about the true reasons they want to continue their sport at the next level and not base it on impressing friends or a girl. It’s a huge commitment and one that shouldn’t be taken lightly.

I don’t think very many high achieving academic students with mediocre athletic talent truly think about the consequences, especially based on the number of RBHS students who do end up committing to smaller programs. Yes, it’s fun to be able to claim bragging rights for the college football jersey hanging off one’s back, but missed opportunities may fly by including internships or the chance to build connections at a different university in a bigger city. A collegiate athlete with good grades and an above average ACT score who commits to a school with fewer than 5,000 kids might have been eligible for academic scholarships at a diverse university in the heart of Dallas, a city home to more than 1,500 corporate headquarters with internship opportunities.

I had to decide what I was going to put all of my effort into after balancing and tiptoeing the fine line of how much work I was willing to do and how far I was willing to stretch myself when it comes to academics and athletics. Golf took up a lot of my time in the fall and diverted much-needed attention away from my studies. This would just get worse at the collegiate level, and I’m not planning on becoming a professional.

I made a spreadsheet last spring with potential colleges and all of the requirements they look for in students. In the last column I added “Golf,” for whether or not it would be an option. Once I researched the universities and everything they had to offer, I realized I preferred a highly ranked education to a small school where the only benefit would be playing golf for four more years. I would’ve had to quit playing competitively at some point, even if I did play in college my career would have eventually come to an end. Very rarely do athletes become professionals, for the Professional Golfers’ Association the chances are 1 in 326,000 or 0.0003%, and I didn’t really think I had what it takes.

“…the goal of [high school] sports is to learn how to be a better person, better teammate, better communicator and to enjoy being a teenager … something you can’t get back.”

There are so many other opportunities to continue my passion for the sport that won’t take away from my mental and physical well-being. I can join a club team when I go to college and still continue to golf in my freetime. There is just so much more to life than sports and there is so much more to learn from my childhood opportunities and experiences because of them.

There is still a lot I have been able to take away from my experiences in sports like lifelong friends and some of my favorite memories. I will never forget the sectional tournament junior year. After a quadruple bogey on the first hole, I had thought my round was doomed. But, standing on the 18th green hours later I tapped in a two-foot putt for a 79 and was surrounded by my own joy and the excited enthusiasm of my coaches.

I can safely say that I’m able to wipe away the tears of a career I witnessed come to an end; the hugs, the disappointments, the pure joy. Walking down the 18th fairway in Bolivar at the final tournament of my senior year I was at peace saying goodbye to how much I’ve given to the sport and how much it has taken away from me. A par on that finishing hole is all I needed to rejoice in my accomplishments, the defeats and all of the people who cheered me on. That is what I’m going to take away from my time in high school sports and even though it isn’t a college scholarship, it’s much more rewarding.

Do you think signing to play college sports is overrated? Let us know in the comments below.

I live how this focuses on both the personal and overarching theme of determination! A great piece that’s very descriptive and tells a story about the struggle of deciding whether or not to play sports in college.

Love this article so so much. I can honestly relate 100% and it’s so nice to know that there is a person, friend and fellow staff writer who can relate to this stuff!