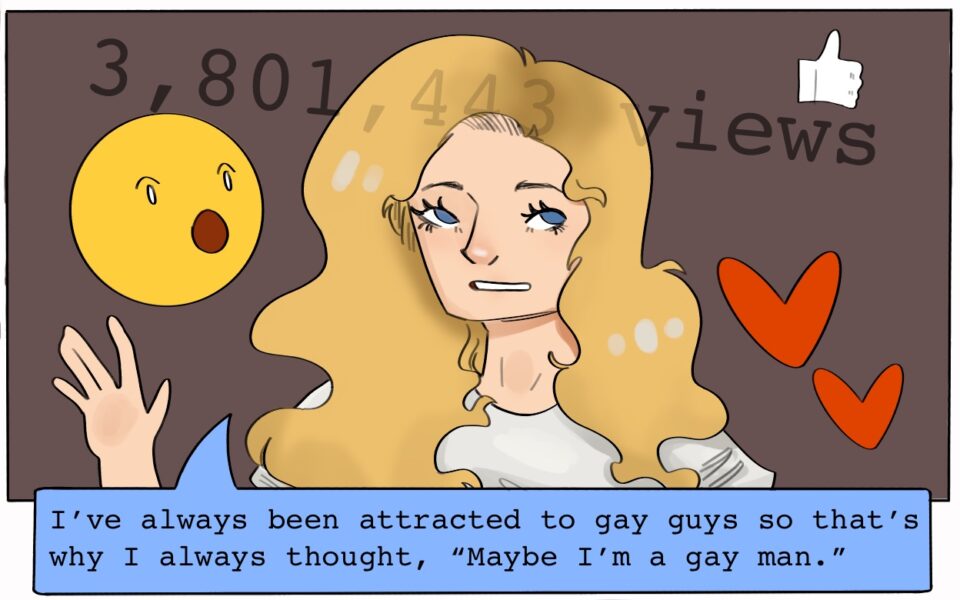 More than 1,000 hate crimes based on sexual-orientation are reported every year. Historic events such as the Orlando shooting, killing 49 at a gay nightclub, or Stonewall, where police violently raided a gay bar at the Stonewall Inn, show just how dangerous homophobia can be.

As undesirable as that attention sounds, some people manage to manipulate it for personal gain. Flaunting sexuality or coming out for clout is becoming a trend and is being used as clickbait.

This year, YouTuber and social media personality Trisha Paytas, famous for her plastic surgery enhanced body, made an Instagram post captioned “Before u judge me, try hard to love me.” Pictured is Paytas in a baggy shirt with no makeup on and her long hair tucked underneath a hat to make her look more masculine. In contrast, most of her posts include revealing photos advertising her feminine features and “adult content” videos. She’s often dolled up in frilly clothing and flashy makeup she describes as “girly.”

The following day, she posted again; this time it was an uncaptioned picture of a transgender pride flag. She also uploaded a coming out video on YouTube titled “I AM TRANSGENDER (FEMALE TO MALE).”

Her statement contradicts the very definition of what it means to be transgender: to identify with a gender that does not correspond with their birth sex. Her new identity as a “gay man” became a heated topic throughout the LGBTQ community. Transgender YouTubers such as Blaire White and Storm Ryan filmed their reactions to her “coming out video” and shared similar feelings of embarassment and disgust.

“People are gonna watch this and think that’s how I am,” Ryan said, “because she’s trying to say the way she identifies— her line of transitioning aligns with me, and it doesn’t.”

Some argue those upset about Paytas’ coming out are invalidating “him” and being “gatekeepers” (people who dictate validity) of the LGBTQ community. However, Paytas has a history of offending its members. In response to American rapper, Aaron Carter coming out as bisexual, Paytas tweeted, “…proud of him for coming out as gay 👊🏻 respect bb 😘.” Using the word “gay” as an umbrella term, a word or phrase that covers a wide range of concepts belonging to a common category, led to a lot of backlash.

Transgender icons throughout history suffered and struggled for equality and for the right to be open about sexuality and gender identity without penalty.

The freedom of expressing one’s authentic self is a privilege, and it’s one Paytas offensively abused by exploiting the transgender community for views and money. In an episode of the H3 podcast that Paytas appeared on, host Ethan Klein exposed that Paytas profited $8,000 off of her controversial video.

Coming out for clout isn’t as common among public figures or people of high status because of the dangers of repercussions. In 2016 Teen Wolf star, Tyler Posey posted a video on Snapchat where he filmed a street sign for Gay St. in Manhattan before turning the camera to his face and saying, “This is me! I am this, and this is me! I’ve never felt more alive. I’m gay!” In his fake coming out video he mocked an experience that’s a big part of the lives of LGBTQ members. He received lots of hate on social media platforms and lost a lot of fans.

The coming out trend is, however, also noticeable in a high school setting. After the legalization of gay marriage, the push for equality continued, and the community brought LGBTQ issues to the forefront of politics and society.

Sexuality can be confusing, particularly in high school as we near the autonomy associated with being an adult, but rushing to identify as a member of the LGBTQ community can devalue the experience for others.”

According to Google Insights, the number of coming out videos uploaded to YouTube has steadily increased since 2015, hitting an all-time high in 2018. Society is beginning to view identifying as LGBTQ as a trend. Australian politician, Bob Katter said it had become “popular” to become homosexual in recent years, calling it a “fashion trend.” While Katter’s views don’t necessarily reflect those of society, he is a person of political power and his opinions have a larger impact than the everyday person.

Some girls will claim they’re bisexual just because they found a female attractive before, but they would never actually date a girl. Sexuality can be confusing, particularly in high school as we near the autonomy associated with being an adult, but rushing to identify as a member of the LGBTQ community can devalue the experience for others.

When those in the public eye, such as YouTubers and internet personalities, come out, they often receive praise from their viewers. However, taking the increased rights and acceptance many in the LGBTQ community see today for granted takes away not only from the members who still battle unaccepting families, hate crimes and religious conflicts but also from the people who laid their lives on the line in events like the Stonewall riots and the Orlando nightclub shooting so that we may have a better experience than they did.

“Her statement contradicts the very definition of what it means to be transgender: to identify with a gender that does not correspond with their birth sex. Her new identity as a ‘gay man’ became a heated topic throughout the LGBTQ community.”

It’s hurtful when one claims to be something they’re not, but it’s even worse when one artificially makes a personality trait of it. Now I’m not saying there’s anything wrong with being out and proud, merely that people should not alter their personality because they feel it’s a necessity to being LGBTQ, and should certainly not isolate themselves within the community, making sexual orientation the only aspect of their identity. Our sexuality is a part of who we are. We cannot change it, and we should not change to conform to societal expectations of what being queer means.

So many members battle internalized homophobia, unaccepting families, hate speech, rejection, religious conflicts and more. Though gay marriage is legal, we have yet to achieve full equality. Coming out just for attention, faking a label or making one’s sexuality a personality trait all only serve to minimize the struggles of the LGBTQ community in the face of an ongoing fight for acceptance. Queer people still face a lot of challenges and when others wrongfully use the word “pride,” abuse their platform to troll viewers, or tokenize sexuality, they are only adding to the problem. Those actions make the LGBTQ community seem like a joke and take away from the seriousness of the movement for greater rights.

How do you think society should respond to public figures who tokenize sexuality? Let us know in the comments below.

Dinner and a Murder: Episode 13 “Young and Hungry (for blood)”

I grow through my BuJo