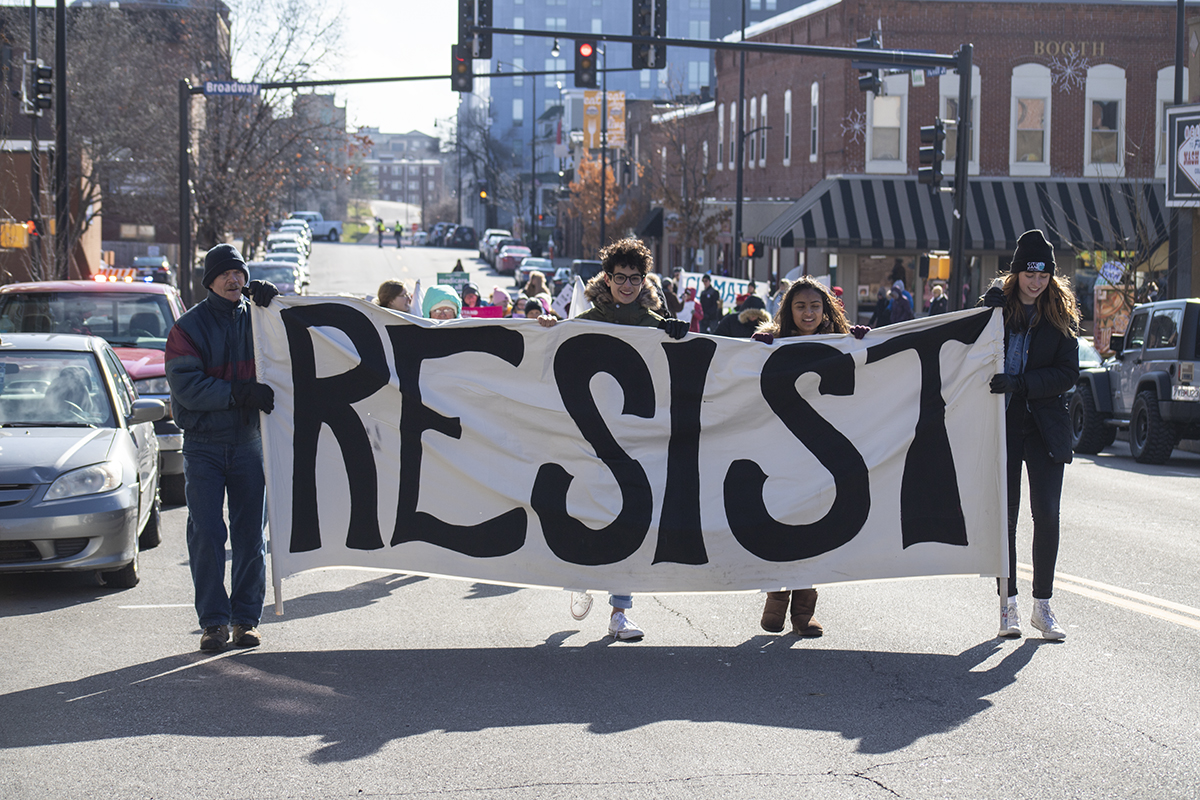 Layered in a sweatshirt and two jackets, I walked about 20 feet from the parking garage to the Courthouse Plaza at 1:00 p.m. I noticed a group of people in neon vests and arm bands made from old tablecloth  who signed up to volunteer as peacekeepers the women’s solidarity march and made my way over toward them. I heard mumbled words through my thick hood and walked closer so I could hear what the speakers were saying. I passed by a lady with two kids who shied away behind their mom when they noticed my camera. I then looked up to see what looked like an outdoor amphitheater full of people buried beneath big coats and blankets. A husband hugging his wife, a father standing behind his son, lots of them holding signs covering a large variety of issues ranging from climate change to peace with Iran. Behind the stage was a government building full of people trying to warm up.

The stage was filled with activists talking about gun violence, the tampon tax, LGBTQ pride and much more. Junior Shruti Guatam spoke about her fight against menstrual oppression,  Ph.D student Bini Sebastian spoke on gun violence and retold the story of Daijon Harris, a 13 year old that was murdered by police. Finally, a reverend from the local Unitarian Church spoke about hope, citing reference to the late Carrie Fisher in “Star Wars: The Last Jedi.”

“We are the spark of hope, that will light the fire that will burn The First Order down”

After the speakers completed their shpeels a music group called the Violet Vonder Haar & Friends sang empowering songs as the group stood up and started marching and chanting downtown. Everyone marching fought for different causes. At the front however, the crowd was united by a banner that said a single word- RESIST. The community members participating in the march clung tightly to their posters in the harsh winds and continued the trudge down Broadway. Though I felt numb from the bitter cold the march was still an inspiring experience to see all these people gathered together in such inconvenient weather just so they could participate in this march.

What’s a topic you’re passionate enough to march for? Let us know in the comments below.

Wonderful photo gallery that describes so much of the event! Still unbelievable that this happened so close to home.