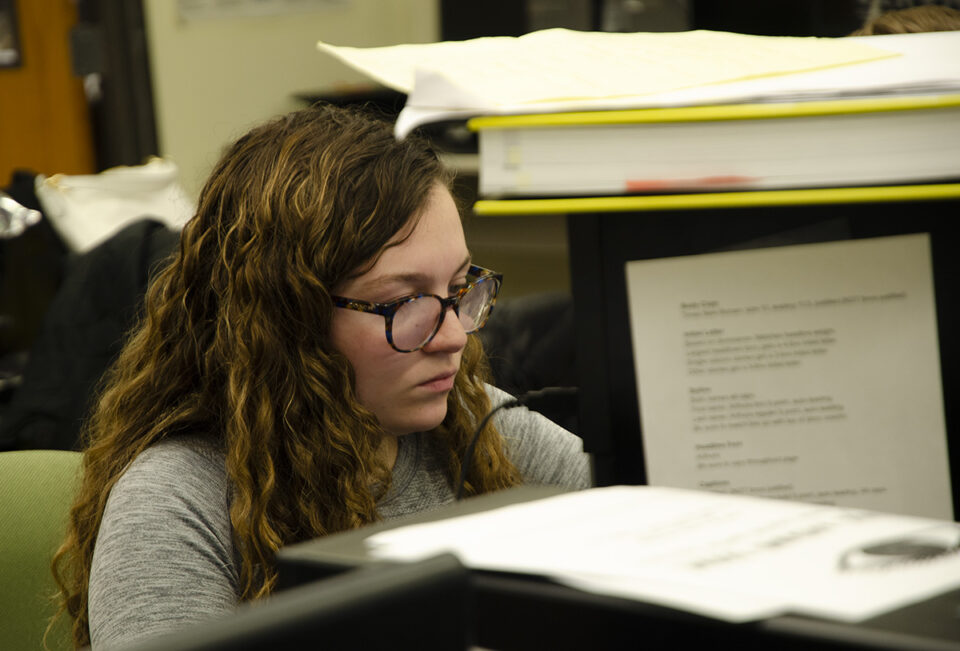 Senior and yearbook staff member Allie Bruns works on her pages outside of class in her free time. Photo by Sophie Eaton.

If students are interested in purchasing a yearbook for the 2019-20 school year the deadline is noon Friday, Jan. 24. Students who want to buy one need to bring $50 to room 328.

The deadline is firm because it was determined by the yearbook production company RBHS is working with, senior and yearbook section editor Corrine Farid said. Students may not purchase yearbooks after the deadline.

“We need to have numbers by [Jan. 24]. So if we don’t have the exact number of yearbooks that everyone wants, then we won’t be able to give you a yearbook if you order it later,” Farid said. “It’s just not really our deadline; it’s their deadline.”

Yearbook is a student-run course where both staff, section editors and Editors in Chief (EICs) work together all year long to design pages and put together the product. Even though most of the work is done in class, senior and EIC Jadyn Lisenby said editors meet as early as the summer before the school year to come up with a theme and the universal designs of the yearbook. The overarching theme for the yearbook is different every year and is revealed once books are given out to the student body. Last year’s theme was “573.”

“Staff members are required to come to all the late nights and one class every other day. However, editors put in a lot of time outside of school,” Lisenby said. “Overall I think everyone on staff including editors spend a lot of time in this room, and they really dedicate a lot of their time to this. It’s almost the same time commitment as a sport because I often find myself staying after school to work on stuff.”

“I’d say yearbook is a very rewarding experience and class overall for me just because it’s a great bond that you form with a lot of the girls and boys that are in the class.”

There have been many monetary deadlines for students throughout the year. Yearbook also publicized senior ads, or Senior Salutes, which highlight a senior with pictures and messages purchased by family, and picture deadlines earlier in the semester. Each book, Lisenby said, costs about how much they are charged for. She said the yearbook class makes most of their money from the senior ads.

“We just put it into the fund for next year’s book so we can use that money to pay for a really cool design that we can put on the front cover because sometimes it costs money for the company to make that certain design,” Lisenby said. “We put that into our yearbook fund where we can also buy SD cards with to take photos with, and we probably sell to at least half of the entire school.”

In order to publicize these deadlines, junior and section editor Kate Burns said yearbook heavily utilizes social media. Staff members post on their Instagram stories and manage the Instagram and Snapchat accounts for yearbook. As a first time editor, Burns said she believes she’s had to “step up to the plate” and has grown as a leader.

Although the deadline is inflexible, students sometimes wait to purchase extra books at the end of the year, she said, which is unreliable and not guaranteed to all students.

“I think a lot of the student body relies on that just because, well first of all, if we have extra books left over for the next year they’re a lot cheaper, I think they’re $30 instead of $50. So a lot of people tend to do that,” Burns said. “Also we’ll have a waiting list at the end for people who waited and didn’t buy a book in the first place.”

Both Burns and Farid said the relationships they’ve built in the class are the most fulfilling part of designing and working on the yearbook. After becoming an editor this year, Burns said getting more involved and taking on more responsibilities “has been really cool.”

“I’d say yearbook is a very rewarding experience and class overall for me just because it’s a great bond that you form with a lot of the girls and boys that are in the class,” Farid said. “We kind of all struggle through it together and there are a lot of stressful situations, but we overcome it in the end and that’s what makes it so much more worth it; that we struggle together and we prosper together, which is really fun.”

What do you think of RBHS’s yearbook every year? Let us know in the comments below.

Dinner and a Murder: Episode 14 “Dahm and Dahmer”