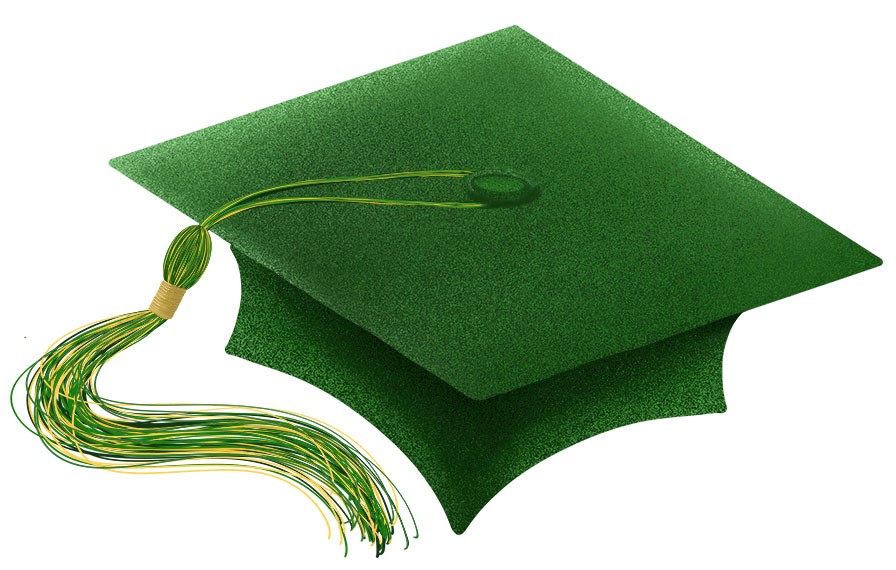 A sea of green stands alone against the dark background of the University of Missouri — Columbia’s basketball arena. Hundreds of anxious yet excited teenagers adorned in matching caps and gowns await their turn to walk across the stage, diploma in hand, into the unknown world of a life outside of RBHS.

Graduation marks a significant milestone in the lives of teenagers emerging from 13 years of schooling, according to Stage of Life, a privately held, educational startup company, and 85.4 percent of teens said graduation was extremely important, ranking it a five on a one-to-five scale. During this major event, high schools across the country recognize their graduating seniors in different ways.

Some value graduation honors, not only spoken but in the form of a cord, stole or other kind of sash draped across the shoulders of graduates. RBHS, Hickman High School, Battle High School and Douglass High School, however, do not follow this same standard, said former principal and current Assistant Superintendent for Secondary Education in Columbia Public School’s (CPS) Dr. Jennifer Rukstad, a tradition that has been in place since 1973.

Did you know?
The high school graduation rate is 90% in the state of Missouri, according to the Show-Me Institute, which is almost 6% higher than the national average.

“The graduation ceremony is to celebrate one thing, and that is the achievement of the graduation diploma. So everyone who walks across that stage has achieved a minimum of 24 credits in the right combination, and they are a Rock Bridge graduate from Columbia Public Schools,” Dr. Rukstad said. “The day is not designed to rub it in whether you came in at 24 credits or you have over 35. Who cares? The whole thing is to say that every one of us in this room met that requirement, and no matter how high or low you hit it, we hit the requirement to be a Rock Bridge graduate.”

As a current senior and high achieving extracurricular participant, Eric Kwon said the desire to wear any such honor would be a personal preference for any senior. Kwon, who is involved in Science Olympiad, Mu Alpha Theta and Math Club, is also an All-State musician. He said he thinks the recognition could be a “good thing.”

“Every graduate’s’ accomplishment is important, and we don’t need to worry about by how far or by how little you passed that standard. You passed the standard. You’re getting a diploma. . . You made it.”

“[Honors] shows each individual talent that a person has, and they’re able to portray it and show it off and let others know what they accomplished during high school,” Kwon said. “I think it would be a really interesting addition to our graduation ceremony.”

Dr. Rukstad said RBHS has instilled the no-adornment policy as a way of focusing on “the togetherness of the class.” She said graduation is a unifying experience and not designed to point out differences among individuals; it’s primarily supposed to celebrate the commonality of the graduating class.

“For some families, it’s very important for them to see their son or daughter honored during the graduation with an honor cord or a stole to celebrate their accomplishments during high school, and we understand that, but we also understand that those accomplishments have already been celebrated or will,” Dr. Rukstad. “There’s nothing that says that’s right or wrong; that’s just where Rock Bridge has always been.”

Senior Alice Hert, however, has no preference in whether or not visible adornments should be present at graduation. She said the purpose of the event is primarily “just to graduate” and prefers the ceremony not waste time recognizing various individuals.

“[Honors] shows each individual talent that a person has, and they’re able to portray it and show it off and let others know what they accomplished during high school.”

“I think it would be an interesting idea, but it would almost encourage leaving out people because not everyone is going to get mentioned, and it would most likely be the more mainstream of clubs and activities that would get mentioned and not so much the more niche and unique clubs and activities,” Hert said. “We just don’t have time to do all of them even though most of them deserve some kind of recognition. So I both see the value but can also understand why shoutouts, in a sense, wouldn’t impede the process of the ceremony.”

Another concern Hert had would be whether or not students would have to pay for their own adornments or not. She said seniors already have to pay for the caps and gowns, which can be expensive, and adding more graduation memorabilia might become a deficit for students of lower incomes who would also deserve recognition.

“Every graduate’s’ accomplishment is important, and we don’t need to worry about by how far or by how little you passed that standard. You passed the standard. You’re getting a diploma. . . You made it,” Dr. Rukstad said. “Our student speakers are chosen by students. Our valedictorians do not speak unless they are chosen to speak by their classmates. Those are all things that are not necessarily conventional, and we’re certainly not trying to be unconventional, but our approach is just what it is, and we generally get very positive feedback. . . based on an approach that every graduate matters.”

What do you think about RBHS’s graduation adornments policy? Let us know in the comments below.

Community members gather together for the women’s solidarity march

I think the the simplicity of everyone wearing green caps and gowns during graduation shows that even through the thick and thin of high school students still made it through together as a class and are unified through those experiences.

I’ve actually never thought about this! Everyone wearing the same thing and the colors of their school definitely creates a sense of pride and patriotism towards their high school and their accomplishments.

I think we should still somehow honor the students who put in the extra work, taking Honors and AP classes, although I can understand why the social pressure of not obtaining a cord or sash from these achievements could be harmful.