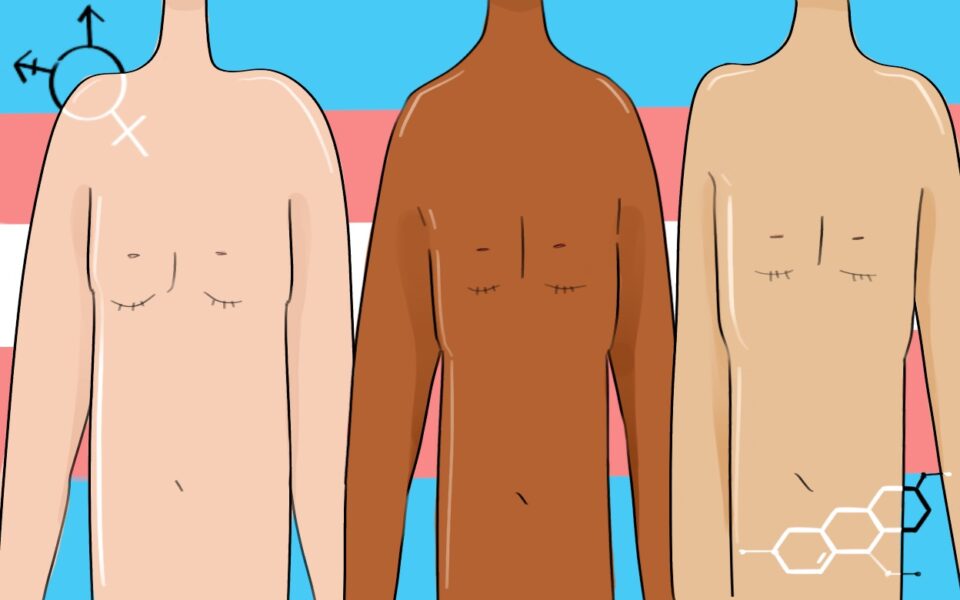 Only one gender-neutral bathroom exists at RBHS. It’s in the nurse’s office, so transgender students use the boys’ restroom or the girls’ bathroom, causing them to make a choice every time they have to go to the bathroom.

If people use the bathroom they identify their gender with, they could be harassed, senior Lucas Clements said. To prevent this possibility, Clements, a  male transgender student, said most transgender students use the nurse’s bathroom.

Clements said he is “afraid of being beat up one day,” believing most transgender students at RBHS feel this way. He also added nothing physical has happened yet, but he fears for the chance it might happen.

“I know that the people at Rock Bridge are generally more liberal, and it’s a nice community, but there is that lingering fear, like, ‘Is this the day that I get beat up in the boy’s bathroom?’” Clements said. “I remember one of my friends one day had to use the [boys’] bathroom, and he was badgered for being in ‘the wrong bathroom,’ and it was a negative experience for him.”

Did you know?
In May 2016, the Departments of Justice and Education declared that discriminating against transgender students because of their gender identity violated Title IX. All schools receiving federal funding were required to treat gender identity as a protected category—just like sex and race. (Source: Tolerance.org)

Morgan Pemberton, a counselor whose focus is on coping with anxiety said she has done research into this claim, and she has found hardly any instances of transgender people committing sex crimes in bathrooms.

“I have spent quite a while looking at this, and all of the cases I’ve looked at of harassment in the bathrooms, it was almost always the opposite,” Pemberton said. “It was always people harassing transgenders in the bathroom, but people keep on saying this unfounded claim to justify restricting the rights of the transgender community.”

Pemberton said these kinds of events can be detrimental to transgender people, even leading to depression. A University of California in Los Angeles study,  found that here was no increase in bathroom crimes after transgender protection laws were made. She said the bathroom issue negatively impacts transgender people because it may lead to physical health problems.

“Unfortunately, because of misinformation and a lack of understanding of what being transgender is, harassment against the transgender community is rampant, and this can cause depression, anxiety disorders and even Post Traumatic Stress Disorder depending on how severe the harassment was,” Pemberton said. “Also, a lot of transgender people choose to not use the restroom in public, and this can cause a significant increase in urinary tract infections.”

Sophomore Lucas Tennyson experienced a similar situation as Clements’ friend before he knew the gender neutral bathroom existed. One day he was in the boys’ restroom, and some fellow male students confronted him as he was exiting his stall.

“It’s kind of scary when there are a lot of people in a group just standing outside of your stall, and that’s what happened to me,” Tennyson said. “They all just stared at me and started making jokes, and I was like, ‘Haha. OK, bye.’ And then they all blocked the door so I couldn’t get out, and then I sort of pushed my way through until they parted the way for me. It didn’t feel great because it was so scary. There was just me and so many of them.”

Tennyson said most of the incidents that happen in the bathrooms at RBHS are discreet and just involve blocking transgender people from entering the restroom or verbally harassing transgender students. According to a national survey in

2015, 63% experienced discrimination because of his or her status as a transgender person. He said he usually uses the nurse’s bathroom because he feels like it is the safest place to use the restroom at school. Additionally, room 201 has two gender-neutral bathrooms available for students.

“[The gender-neutral bathroom] a place where you can’t really get into tricky situations because it’s pretty small,” Tennyson said. “I don’t necessarily feel like I’m unsafe when I use other bathrooms, but I do kind of in a sense because it’s just the thoughts of, ‘What if I’m in with the wrong kind of people?’”

“It’s pretty stressful because you worry all the time whether people are going to see you walking into a bathroom and say, ‘That’s weird,’ Tennyson said. “It just kind of makes you realize that you are different from everyone else in that you have to make this decision to go to the bathroom or not.”

I know that the people at Rock Bridge are generally more liberal, and it’s a nice community, but there is that lingering fear, like, ‘Is this the day that I get beat up in the boy’s bathroom?’”

Lesley Thalhuber, the RBHS outreach counselor said the reason for people feeling uncomfortable with transgender students using the restroom they identify is straightforward.

“People don’t usually like differences and want to impose their views on others, whether the other person wants that or not,” Thalhuber said.

The process if someone identifies as transgender is as follows: the person changes their name to the name they prefer in the school records with their counselor, and then they discuss about what to do when people harass the student in  bathrooms and tell the student that there is a gender neutral bathroom available, Thalhuber said. CPS added transgender students and staff in its anti-discrimination policy in September 2015.

“When I first came here about five years ago, there were trans people here at Rock Bridge, and me and the other outreach counselors worked hard to make sure we were welcoming and protective of our trans students,” Thalhuber said. “And so in that process, we also talk about what to do if an incident occurs in a bathroom or tell them about the gender-neutral bathrooms in the nurse’s office. With this issue, I think people have fears, whether they are justified or not. Sometimes these  actions people take inside the restrooms are just people who are not being tolerant of the different people there are.”

“The [boys’] bathrooms always have something wrong or broken. I know the mirrors are knocked off in the English hallway, or rather the entire stall door in the band hallway,” Clements said. “I just think the condition of the bathrooms could be improved.”

Tennyson said he thinks the bathroom situation can get better if “everyone was a bit more open minded.” He added students at RBHS are good about supporting transgender people in using their preferred restroom, but there are a select few who are less tolerant.

“I think people should be a bit more understanding and more tolerant because when we can get past trying to restrict where people can go to the bathroom or people feeling unsafe using the bathroom, [the school] will be a better place,” Tennyson said.

How do you think CPS should accommodate bathrooms for LGBTQ students? Let us know in the comments below.