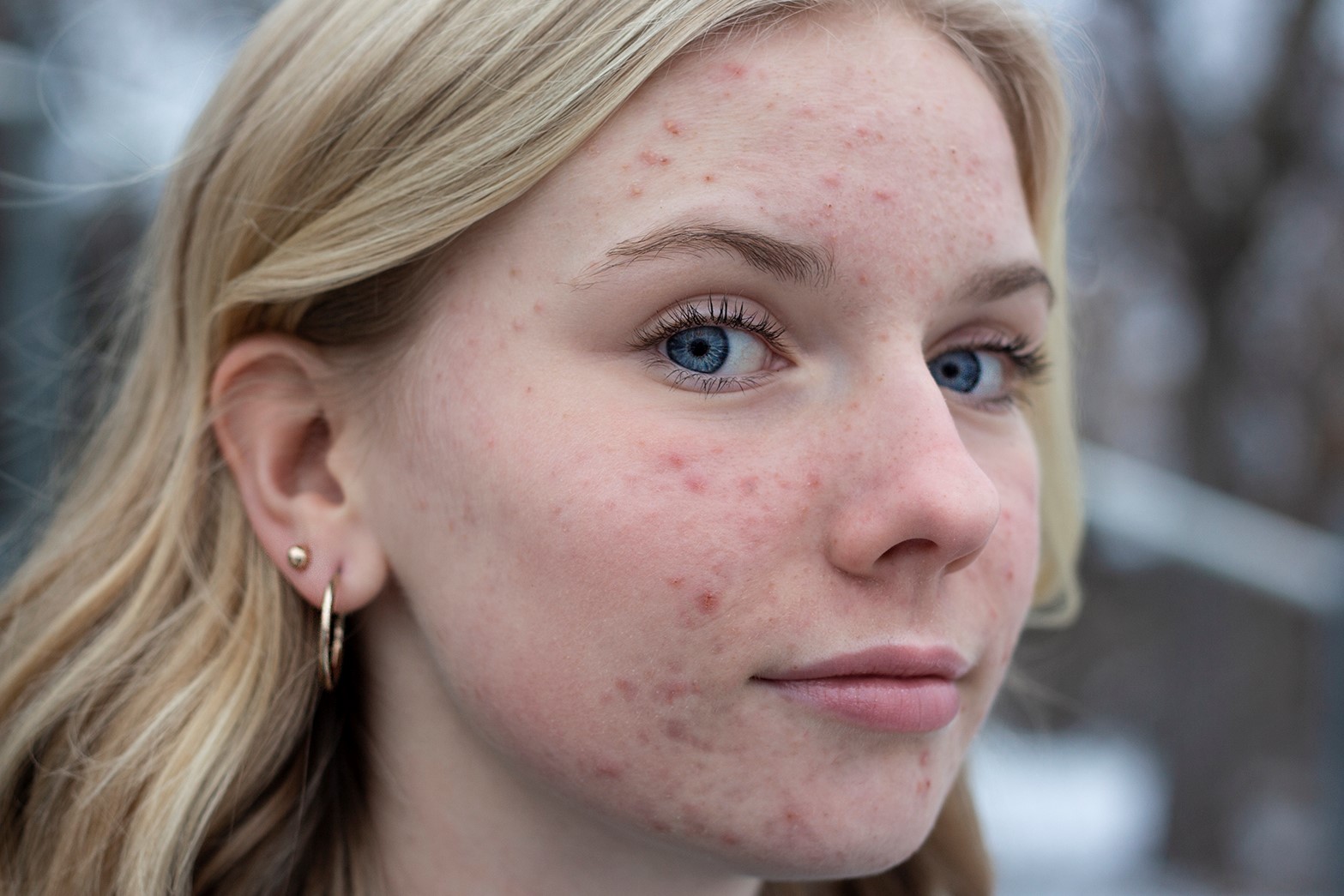 Feeling bored one day, I looked up #naturalbeauty on Instagram and found myself staring at a screen full of women with glowing skin, smooth legs, waxed eyebrows and straight white teeth. After I scrolled through a small portion of the 14.9 million photos with that tag, I concluded natural beauty meant wearing little to no makeup, and it’s only for those who already fit societal beauty standards: thin with clear skin and a perfect smile.

Social media constructs a corrupt image of what natural beauty should look like. Ninety percent  of the world population experience acne at some point in their life, yet acne isn’t represented in the media. In my experience as a teenager, I’ve viewed countless ads for products that promise to either conceal or eliminate pimples, but I have never seen positive depictions of acne where someone looks confident and happy with their appearance. When I see photos of myself, I feel compelled to edit out all the little pimples on my face to satisfy my self esteem.

While puberty causes teenagers to be especially prone to acne, adolescents aren’t the only ones who suffer from the pesky bumpy blemishes. The International Dermal Institute stated clinical studies show between 40-55% of the adult population age 20-40 receive a persistent acne diagnosis. This skin disease is long-term, making it hard to ignore especially when it’s visible any time you see yourself whether it be in a mirror or in a photo.

A 2018 article from the New York Times claimed there is a 63% increased risk of depression in a person with acne compared to someone without. While the article says the reason for the correlation between acne and one’s risk for depression is unclear, I think it’s because of the negative portrayal of acne in the social media. The only faces full of acne I’ve seen on social media are from paid partnerships with skincare companies showing how their products were successful in clearing skin. Perhaps if more people with acne presented it as something beautiful, then we could reverse the mindset that it’s something to be ashamed of.

In a 2019 interview with journalist Rebecca Nelson from Marie Claire, Chamberlain opened up about what she wishes to accomplish with her platform and said, “I want to spread the message of ‘Hey, girls can [choose to] not wear makeup. They can put their hair in a bun. They can have their acne out. They can do whatever they want.’”

It’s inspiring to see public figures fighting against societal norms, but battling beauty standards includes ignoring the army of critics that flood the comment section with rancor which can take a negative toll on one’s mental health. Chamberlain tweeted about how she’s waiting for the day that people will stop being mean to her but is starting to realize that day won’t come. Even if her acne cleared up, critics would target other flaws.

Acne isn’t the only natural feature that needs more representation; it’s also important for media to normalize different body types, crooked teeth, body hair, stretch marks, birthmarks, and scars. Some public figures attempt to fight beauty stigmas including Swedish artist and model Arvida Byström who doesn’t shave her legs and armpits and even participated in a 2017 campaign with Adidas where she modeled her shoes and showed off her hairy legs. Unfortunately Byström reported she recieved “rape threats” in her direct messages on Instagram ever since the ad released along with a comment section littered with hate. The backlash she experienced from merely showing her natural leg hair is absurd.

Being bold enough to stand against such strong stigmas takes a lot of courage because it results in a lot of backlash. Other female celebrities — Tyra Banks, Amanda Palmer, Lindsay Lohan, Bella Thorne and Celine Dion — have also made appearances either on stage or on social media with hairy legs or armpits, but not everyone is supportive of women who choose not to shave. For example, Celine Dion made headlines after a 2008 performance in Tokyo when some fans noticed her hairy legs on stage, many calling the incident a “hair-raising” performance.

American model Paris Jackson proudly posted multiple photos of her unshaved legs in 2017. Jackson later shared a video on her Instagram story where she said, “I love hair, and sweat, and BO. I f****** love it, I think it’s great. Some people think that it’s like super disgusting, especially on girls, but every human body does it. It’s natural. Get over it.”

“Representation of acne in media sets an unrealistic standard. The idea of ‘perfect’ skin is glorified. When there is a character (in a movie or TV show) that does have acne, that character has a glow up and it makes it seem like getting rid of acne is really easy, but it’s not. I think people, including myself, need to remember you are so much more than what happens with your acne.”

“Shaving takes too much work, and for what? It starts to grow back so quick and you’re back to square one. Women definitely shouldn’t be shamed for their natural body hair, but we also to be sure not to put down women who enjoy shaving. There’s nothing like the feeling of a fresh clean shave under clean sheets, and the shine is rather pretty.”

“Embracing different body types as a society is extremely important because it’s so normal to have different body shapes. Everyone has a different body so it should be normalized in society. I spent a long time hating my body because parts of my body were too big or too small and I wasn’t like the models and girls that everyone loved. It took me a long time to learn to love myself and be confident. It took a lot of work so I think it’s great when brands like aerie advertise different sizes of people. I hope it becomes so normal that it’s not as difficult for others as it was for me to learn to love myself.”

More than just a few individual models are attempting to demolish beauty standards by showing off their natural features that critics deem disgusting. Brands like Aerie and Modcloth are encouraging body positivity by showing models of all different shapes and sizes. In addition to the spread of representation of realistic body types, more and more modeling agencies are hiring models with tooth gaps, such as Lindsey Wixson, Jessica Hart and Vanessa Paradis as opposed to only using models with perfectly straight teeth. The inclusion of individuals with more average appearances in ads and magazines can help encourage others to accept their natural selves without constantly feeling obligated to alter their authenticity for approval.

Some companies and public figures are taking big steps to fight stigmas, but they can’t fight them alone. Supporting the push for representation of true natural beauty by putting money towards stores that encourage body positivity is a vital part of the reform of beauty standards. It’s also important to stand against critics that impede on the acceptance of naturality. Change takes more than just a handful of celebrities protesting societal beauty norms, it takes a determined group that’s willing to support and defend the cause even if it’s against the majority.

I have a responsibility as a photographer to stop supporting acne stigmas by editing out the pimples in senior photos or family photos, but everyday consumers also have a duty. Buying from and supporting brands and individuals who are brave enough to show off their authentic beauty — even if it opposes what’s considered “normal” — can reverse beauty standards. Making the choice to ignore and abstain from the pressures of beauty standards is challenging but it offers the potential for a society that encourages people to embrace their natural features rather than concealing them. It’s OK to want to have shaved legs or straight teeth, but nobody should feel ugly for being themself.

What natural features are you learning to embrace? Let us know in the comments below.

Homies and Homicide: Episode 17 “Signs Your Child Might Be A Serial Killer”

Sarah, you are so incredibly talented.

I loved this! It breaks my heart that society nowadays makes such a big deal and throws a fit over perfectly normal things like BO and acne. In a perfect world, people would just calm down about everything and love one another no matter what!