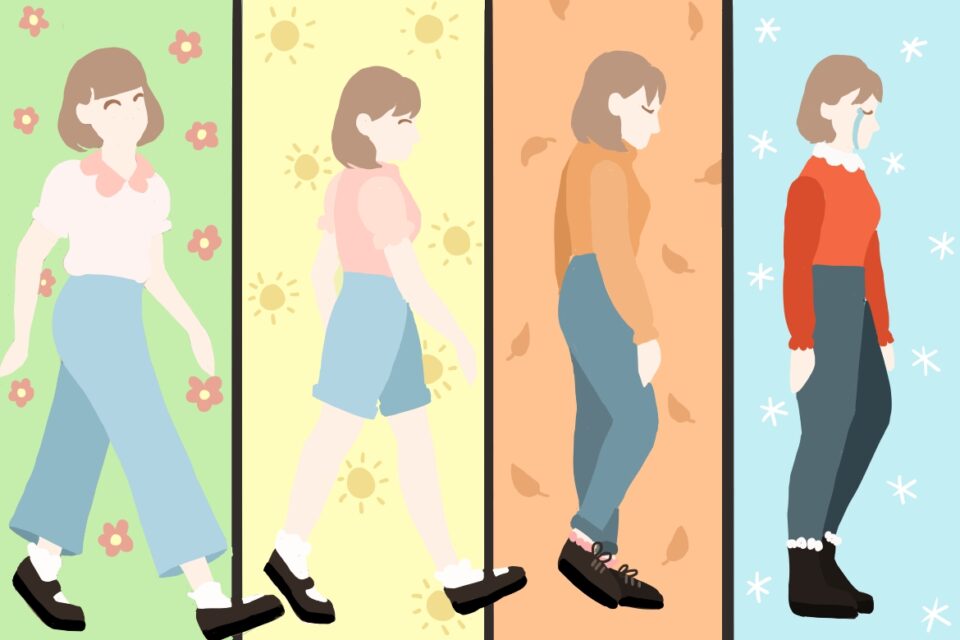 The transition from warm, carefree summer days to dark, chilly winter nights can bring feelings of gloominess and lethargy, according to Rush University Medical Center. In the U.S., nearly 5,000 people suffer from Seasonal Affective Disorder (SAD), a form of depression that occurs in the fall and winter months, and 10-20% experience milder “winter blues,” according to Cleveland Clinic.

While the cooler seasons can be debilitating for individuals with SAD compared to those with moderate symptoms, scientific evidence suggests levels of natural light affect both groups.

Shorter periods of sunlight can cause a decrease in serotonin, a neurotransmitter in the brain that regulates mood, along with changes in melatonin, a hormone that affects mood and sleep. Furthermore, decreased levels of natural light can disrupt the body’s circadian rhythms, which function like an internal, 24-hour biological clock. Circadian rhythms also control cycles of sleep and wake.

While senior Erin Koller does not have SAD, she said she feels increasingly tired and unproductive in the winter than she does in the summer. Koller said she feels happier, has increased motivation and experiences a greater desire to go outside in the summer. She looks forward to spending the longer days with friends, at the park or at the West Broadway pool where she lifeguards.

“I’d say summer time [is my favorite season] because you get to be in the water, [and] outside I know it gets hot, but I’m always in the water. And [there’s] no school.”

“I’d say summer time [is my favorite season] because you get to be in the water, [and] outside I know it gets hot,” Koller said, “but I’m always in the water. And [there’s] no school.”

Sophomore Jim Whaley said he feels energized in the summer when the weather is nicer and school’s not in session.

“In summer, it’s sunny, which is more happy, and it makes you feel better,” Whaley said. “And [during] seasons like fall, maybe the grass isn’t as green or there’s snow on the ground, which may give your brain visual cues that something’s wrong. I feel like you’re more sad.”

In the summer, Whaley and his friends play basketball for fun and he prepares for the high school football season. Throughout the months with fewer daylight hours, however, he stays inside and plays MineCraft on his XBox with his friends. He said his parents don’t let him go outside once it gets dark, which happens sooner in autumn and winter as a result of the earth’s tilt, according to The Children’s Museum of Indianapolis, a non-profit organization that educates children and their families about science, history and art. Koller also said she doesn’t get as many opportunities to go outside in the winter as she does in the spring and summer.

“I like having light come in my window when I’m doing homework, but you can’t do that in the winter. I don’t really feel like getting anything done after school, and I’m already so tired, and the darkness just makes me even more tired.”

As a member of the RBHS swim team, Koller wakes up to go to practice as early as 5:30 a.m. when it’s still dark and stays inside most of the day at school. When she arrives back home, the sun is already setting. She said this lack of daylight impacts her motivation to work in the evening.

“I like having light come in my window when I’m doing homework, but you can’t do that in the winter,” Koller said. “I don’t really feel like getting anything done after school, and I’m already so tired, and the darkness just makes me even more tired.”

To combat feeling drained in the cooler seasons, some people drink coffee, though Koller said doesn’t enjoy the beverage without lots of sugar. A study found that a cup of coffee every four hours can improve one’s mood throughout the day, according to the non-profit organization The Institute for Scientific Information on Coffee. Since caffeine is a stimulant, it boosts activity in the central nervous system, according to Verywell Mind, an online resource offering resources to individuals looking to maintain their health. While caffeine can enhance awareness, too much can lead to insomnia, jitteriness and anxiety.

Eating foods such as proteins, fruits and vegetables as well as avoiding simple carbohydrates such as sugar and opting for whole grains are healthy ways to deter negative feelings of depression and balance hormones, according to Rush University Medical Center. Exercising at a moderate level for 30 minutes each day may also improve mood swings associated with seasonal changes as physical activity releases endorphins, or chemicals that relieve pain and increase happiness. Another approach involving physical movement that can stabilize mood and promote good health not only throughout the seasons, but in life, is the practice of energy medicine.

Dr. Karen Onofrio, a specialist in anatomic and clinical pathology, is also a certified practitioner in Eden Energy Medicine, a restorative healing system based on Eastern medicinal traditions that focuses on the body’s energy centers, pathways (meridians) and auras. The practice of energy medicine is thousands of years old, and everyone from ancient Egyptians, to NFL athletes to breast cancer survivors have used it to relieve pain or stress, according to the health news platform Health.com. While more research is needed to fully support this form of alternative medicine, Dr. Onofrio said performing Donna Eden’s Daily Energy Routine is the best way she has found to “stay balanced, healthy, and vibrant” throughout the seasons.

Did you know?
Two ways to improve mood and well- being throughout the year include eating healthy foods such as fruits and vegetables instead of sugar and exercising daily at a moderate level for 30 minutes. Source: Rush University Medical Center.

Donna Eden, an energy medicine spokesperson who uses her ability to see the body’s subtle energies as a healing method, discusses a multitude of ways one can restore and maintain the flow, balance and harmony of his or her body’s nine energy systems in her books, energy routine and on her website. Examples of exercises in Eden’s Daily Energy Routine include massaging acupressure points, tracing energy meridians and focusing the mind to move energy to different locations in the body. Dr. Onofrio said the routine builds resilience in one’s body and energy systems and is easy and accessible for “anyone, anytime or anywhere.” As the seasons and weather change, so do people’s circadian rhythms. Energy medicine offers tools and techniques to help people cope with symptoms associated with these internal and external energy changes.

Traditional Chinese medicine states the body’s “qi,” or energy frequency, may not be aligned with that of the weather or seasons, which can cause “physical and emotional imbalances,” according to The Healing Place, an organization that provides resources to individuals suffering from digestive issues linked to autoimmune diseases and chronic pain conditions. In warmer temperatures, qi moves more quickly than it does in colder ones. In addition, some people may experience heightened sensitivity to seasonal temperature changes, which can result in illnesses, such as liver problems in the spring and kidney problems in the winter. Energy medicine utilizes techniques such as Qigong, an ancient Chinese practice involving meditation, movement and breathing exercises, to bring balance back into the body.

It is important to pay attention to how the seasons affect your mood, so that you can start different activities that can positively help your mood.”

Though Koller doesn’t practice energy medicine, she said she puts up Christmas lights or “twinkly lights” in her room to help her feel awake throughout the darker seasons. She said finding a bright spot to get her work done increases her productivity. Individuals who experience mild to severe symptoms such as anxiety and exhaustion in the fall and winter as a result of shorter periods of daylight may find relief from light therapy, which uses white fluorescent bulbs to replicate sunlight. This form of therapy helps regulate the body’s release of melatonin, which normally increases as the sun begins to set.

Koller said completing her homework earlier in the afternoon or during her Alternating Unassigned Time helps her avoid doing it at night when she’s feeling burned out. Finding a method to cope with negative symptoms and excessive fatigue in the winter and fall is important so one can enjoy their best quality of life, regardless of whether he or she struggles with SAD or not, according to Rush University Medical Center.

“It is important to pay attention to how the seasons affect your mood,” Koller said, “so that you can start different activities that can positively help your mood.”

How do the seasons and amount of daylight affect your mood and energy? Let us know in the comments below.